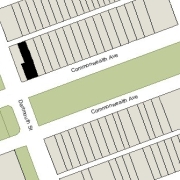 151 Commonwealth was designed by architect Robert Gould Shaw (of the firm of Shaw and Shaw), and built in 1876 by Standish & Woodbury, masons and builders, and David H. Jacobs & Son, masons, one of two contiguous houses (151 Commonwealth and 303 Dartmouth), designed to create symmetrical compositions on both the Commonwealth and Dartmouth façades.

The land on which 151 Commonwealth and 303 Dartmouth were built was originally two lots, a 32 foot wide lot at the corner Commonwealth and Dartmouth, and a 26 foot wide lot to the east of it. The corner lot was purchased from the Commonwealth of Massachusetts on April 9, 1863, by a trust established under the will of Gardiner Greene for the benefit of his daughter, Martha Babcock (Greene) Amory, the wife of Charles Amory, and the 26 foot wide lot was purchased from the Commonwealth on December 20, 1870, by Martha (Greene) Amory in her own right. Charles Amory was a textile manufacturer; he and his wife lived at 9 Marlborough and then at 198 Beacon.

On January 25, 1872, the two lots were purchased from Martha Amory by Hollis Hunnewell, the brother of Isabella (Hunnewell) Shaw and Arthur Hunnewell. He and his wife, Louisa (Bronson) Hunnewell, lived at 315 Dartmouth, across the alley to the north.

Click here for an index to the deeds for 151 Commonwealth, and click here for further information about the land between the north side of Commonwealth and Alley 424, from Clarendon to Dartmouth.

Presumably because they were built for himself and his brother-in-law, Robert Gould Shaw designed two the houses in an unorthodox manner. Rather than divide the 58 foot wide into two regularly shaped lots, he made 151 Commonwealth 38 feet wide on Commonwealth and then tapered it to the east so that the frontage on the alley was only 27 feet 8 inches. The lot at 303 Dartmouth, with a frontage of 124 feet 6 inches on Dartmouth, was only 20 feet wide on Commonwealth and increased to 30 feet 4 inches on the alley. In addition, he designed an open courtyard 6 feet wide and 19 feet long in the middle, between the two houses, to be shared by the owners.

The Commonwealth Avenue façade of the two houses includes a one story bay with a pediment in the center which appears to have been the original entrance to 151 Commonwealth. However, photographs from 1883 show the entrance inserted into the front of the bay to the east and the central bay as being a window with a basement entrance on its the east side. Either the house was remodeled soon after it was built, or this design was original and the central bay was included as a “faux entrance” to reinforce the symmetry of the façade.

Also to achieve symmetry, the façade includes what appears to be a false party wall extension projecting through the mansard roof. Under the building code adopted following the November 1872 Boston fire, party walls were required to extend above the roof and a gutter stone or corbel had to separate the cornices of adjacent houses. Because the 58 foot frontage on Commonwealth was not divided equally between 151 Commonwealth and 303 Dartmouth, the party wall extension was required at a point 20 feet from the western corner, creating an uneven design. Shaw solved this problem by adding a matching faux party wall extension and corbel in an equivalent position to the east (just west of the octagonal bay at 151 Commonwealth), thereby creating a balanced composition. 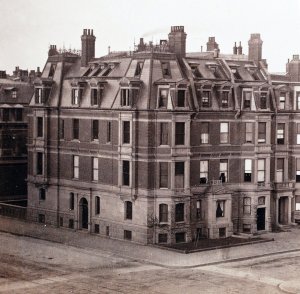 Robert Shaw was in partnership with his brother, George Russell Shaw, in the firm of Shaw and Shaw, from 1874. In about 1882, Robert Shaw gave up his career as an architect in order to manage his property and serve as trustee of various estates. George Shaw continued to be a practicing architect, and subsequently went into partnership with Henry Sargent Hunnewell, the brother of Isabella (Hunnewell) Shaw, Arthur Hunnewell, and Hollis Hunnewell.

The Shaws also maintained a home in Wellesley, and in certain years appear to have lived there or elsewhere, or were traveling abroad, while their Boston home was temporarily the residence of others.

The Shaws probably lived at 151 Commonwealth for part of the 1888-1889 winter season, and at 130 Beacon with Isabella Shaw’s father, Horatio Hollis Hunnewell, during part of it.  They are listed at both addresses in the 1889 Blue Book.

The Shaws were living elsewhere for the next three seasons.

During the 1889-1890 season, 151 Commonwealth was the home of Samuel Dennis Warren, Jr., and his wife, Mabel (Bayard) Warren. They previously had lived at 174 Marlborough.  Samuel Warren had been an attorney in partnership with future Chief Justice Louis D. Brandeis.  In 1888, after his father’s death, he had withdrawn from active participation in the firm and assumed management of his father’s paper manufacturing company, S. D. Warren & Co.  The Warrens moved to 261 Marlborough by the 1890-1891 season.

During the 1890-1891 winter season, 151 Commonwealth was the home of Augustus Hemenway, a trustee of estates, and his wife, Harriet Dexter (Lawrence) Hemenway.  They lived at 91 Marlborough and had just purchased 273 Clarendon, next door.  They were in the process of combining the two houses into a single residence and lived at 151 Commonwealth during the remodeling.   They had resumed living at their remodeled house at 273 Clarendon by the 1891-1892 season.

During the 1891-1892 winter season, 151 Commonwealth was the home of paper manufacturer and former Congressman William Augustus Russell and his wife Frances Spofford (Hall) Russell. They also maintained a home, Lakeview Farm, in North Andover. The Russells had lived next door, at 303 Dartmouth, during the 1889-1890 season. By the 1892-1893 season, they moved to 146 Beacon, the home of Henry Sargent Hunnewell, another of Robert G. Shaw’s brothers-in-law.

During the 1895-1896 winter season, the Shaws were living at 130 Beacon with Isabella Shaw’s father, Horatio Hollis Hunnewell, and 151 Commonwealth was the home of Oliver Ames and his wife, Elise Alger (West) Ames.  They had lived at 120 Beacon during the 1893-1894 season and also maintained a home in North Easton.  He was treasurer of Oliver Ames & Sons, the pick and shovel business founded by his great-grandfather in North Easton, and an investor in real estate, railroads, and other businesses.  They had moved from 151 Commonwealth by the 1896-1897 season, and by the late 1890s were living at 15 Commonwealth.

During the 1898-1899 winter season, it was the home of stockbroker William Bowditch Rogers and his wife, Augusta (Kellogg) Rogers.  The previous season they had lived at 169 Commonwealth.  In 1900, they moved to 152 Commonwealth. 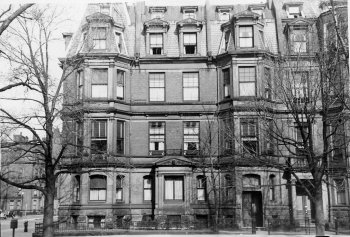 151 Commonwealth and Commonwealth façade of 303 Dartmouth (ca. 1942), photograph by Bainbridge Bunting, courtesy of The Gleason Partnership

During the 1900-1901 winter season, 151 Commonwealth was the home Amy Gore (Walker) Iasigi, the widow of Oscar Iasigi, and their daughters, Annie Walker Iasigi and Nora Iasigi. Oscar Iasigi had been treasurer of the Vassalboro Woolen Mills and had served as Consul General in Boston for the Ottoman Empire; he was killed in the wreck of the steamer City of Columbus in 1884. During the 1899-1900 season, Amy Iasigi and her daughters had lived at 170 Beacon. They also maintained a home, Clovercroft, in Stockbridge.

Annie Iasigi married in April of 1901 to Arthur Edwards Grannis. After their marriage, they lived in New York. Amy and Nora Iasigi moved to an apartment at the Empire Hotel at 333 Commonwealth for the 1901-1902 season and to 8 Gloucester for the 1902-1903 season.

By 1902, Robert and Isabella Shaw were once again living at 151 Commonwealth. In June of 1902, he applied for (and subsequently received) permission to construct an 17 foot by 9.5 foot addition (9 feet high) at the rear of the existing building.  The addition was designed by architect R. Clipston Sturgis.

The Shaws continued to live at 151 Commonwealth until 1917.

On September 5, 1917, 151 Commonwealth was purchased by architect Arthur Little. He and his wife, Jessie (Whitman) Means Little, made it their home. They previously had lived at 35 Commonwealth. They also maintained a home in Wenham.

The Littles lived at 151 Commonwealth during the 1917-1918 and 1918-1919 season, after which they maintained their Boston residence at the Hotel Austerfield at 7-9 Massachusetts Avenue and then at the Hotel Agassiz at 191 Commonwealth (where they were living at the time of his death in March of 1925).

By the 1919-1920 winter season, 151 Commonwealth was the home of Rodman Paul Snelling and his wife, Eva Burnham (de Tréville) Snelling.  They had lived at 317 Beacon during the previous season.  He was treasurer of the Saco-Lowell Shops, makers of textile (cotton worsted and spun silk) machinery.

On August 30, 1953, 151 Commonwealth was acquired by real estate dealer Thomas J. Diab’s Baid Realty Corporation (Baid being the reverse spelling of Diab). At the same time, he also acquired 135 Commonwealth, 303 Dartmouth, 90 Marlborough, and 92 Marlborough from the school. The school retained 21-23 Marlborough, converting them from dormitories to classrooms.

In 1955, The Commonwealth School, Inc., leased 151 Commonwealth and 303 Dartmouth.  Charles E. Merrill, Jr., founder and headmaster of the school, lived at 23 Commonwealth.

In January of 1956, the Board of Appeal approved the school’s plans to consolidate the buildings and to construct an addition at the rear, 24.5 feet x feet, 13 feet high, for use as a gym and dining room (probably replacing the addition constructed in 1902).

Commonwealth School continued to be located at 151 Commonwealth and 303 Dartmouth in 2016. 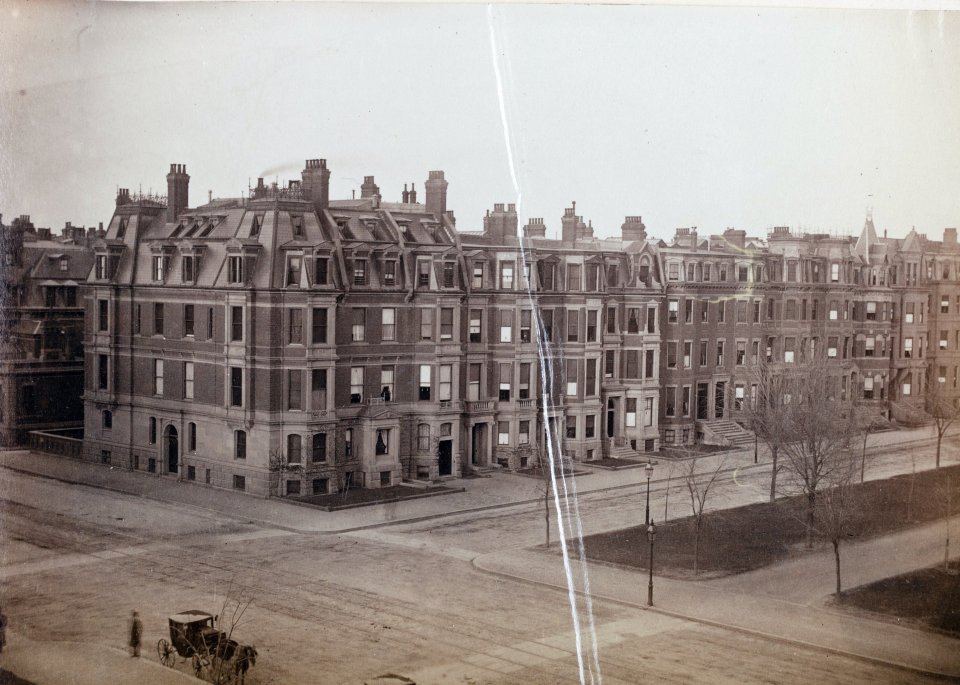 Looking northeast from the corner of Commonwealth and Dartmouth, taken from the Hotel Vendome in December 1883; Manning family album, courtesy of Historic New England