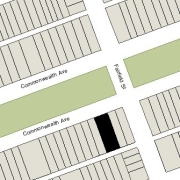 Click here for an index to the deeds for 250 Commonwealth.

The original permit application indicated that the building would contain twenty apartments plus a janitor’s suite in the basement. By 1927 — and probably as built — it was a twenty-two unit building.

On September 1, 1925, probably prior to the commencement of construction, 250 Commonwealth was purchased from George Nelson Jacobs by Ralph E. Snider and Samuel J. Wolfson, trustees of the Tudor Realty Trust.

On June 18, 1935, the New York Life Insurance Company foreclosed on its mortgage to the Tudor Realty Trust and took possession of the building. It continued to own the building until 1942.

On December 31, 1942, 250 Commonwealth was purchased by Solomon Rokach (Schulim Roikach) and his wife, Irma (Naschelski) Rokach. He died in September of 1949, and she died in December of 1971. In her will, Irma Rokach left 250 Commonwealth in trust, with Norman Myron Fain (Solomon Rokach’s first cousin, once removed) as trustee. On September 21, 1949, he transferred the property to his daughters, Wendy B. Fain and Martha Ann (Fain) Roberts, the wife of Maurice Arthur Roberts, Jr.

On October 1/2, 1979, 250 Commonwealth was purchased from Wendy Fain and Martha (Fain) Roberts by Gaetano F. Morello, trustee of the Comm. Ave. Trust.

On October 23, 1979, he converted the property into 23 condominium units, The Condominium at 250 Commonwealth Avenue.

248-250 Commonwealth were built in 1878-1879 by John W. Shapleigh, builder, for speculative sale. He is shown as the owner on the original building permit application for both houses, dated June 7, 1878. The architect is not identified on the permit application, but the houses are attributed to Samuel D. Kelley by Bainbridge Bunting in his Houses of Boston’s Back Bay. Samuel Kelley designed 252 Commonwealth at about the same time for John Shapleigh’s brother, Samuel Shapleigh, also a building contractor.

248-250 Commonwealth were built on a 48 foot wide parcel of land, the western 43.5 feet owned by George B. Hyde, and the eastern 4.5 feet owned by Asa P. Potter. On June 3, 1878, John Shapleigh entered into agreements with George Hyde and Asa Potter under which they agreed to sell him the land at a specified price on a future date, and he agreed to build two brick dwelling houses at least 58 feet deep and at least three stories high, not including the mansard roof. On October 11, 1878, as the houses were nearing completion, they transferred the land to him. The land had changed hands several times in the past and was part of a parcel previously owned by Nathan Matthews, part of an even larger tract he had purchased on January 2, 1871, from David Sears, Jr., Frederick R. Sears, and Knyvet Sears.

In early 1879, John Shapleigh was declared insolvent. His assets, including 248 Commonwealth and 250 Commonwealth, were assigned to Joseph F. Paul and George Lewis, appointed by the Court of Insolvency. They subsequently sold the houses to individual buyers.

On September 10, 1879, 248 Commonwealth was purchased by locomotive manufacturer William Gordon Means, He and his wife, Martha (Allen) Means, made it their home. They previously had lived at 16 Hancock.

Martha Means died in April of 1892. William Means continued to live at 248 Commonwealth until his death in January of 1894. In his will, he left the residue of his estate in trust for the benefit of their children, to remain in trust until January 1, 1900, when the principal was to be distributed.

William and Martha Means’s unmarried daughters, Anne Middleton Means and Mary McGregor Means, continued to live at 248 Commonwealth, and on January 18, 1900, the trust established under their father’s will transferred the property to them as part of their shares of his estate.

Mary Means died in July of 1904. In her will, she left her interest in 248 Commonwealth to Anne Means, who continued to live there. 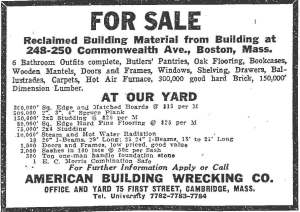 Advertisement of sale of salvaged materials from 248-250 Commonwealth, by the American Building Wrecking Company; Boston Globe, 31May1925

From about 1913 to 1916, Anne Means was traveling and living at 35 Commonwealth with Arthur Little and his wife, Jessie (Whitman) Means Little.  Jessie Little was the widow of Anne Means’s brother, Robert Lawrence Means.

By the 1912-1913 winter season, 248 Commonwealth was the home of Anne Means’s brother and sister-in-law, James H. Means and Agnes (Bankson) Means.  They previously had lived in an apartment at 261 Beacon.  They continued to live at 248 Commonwealth during the 1915-1916 season, after which they moved to Beverly Farms.

They continued to live at 248 Commonwealth until Anne Means’s death in December of 1923.

On March 10, 1879, 250 Commonwealth was purchased by Charles U. Cotting, trustee on behalf of Thomas O. Rogers, and became the home of Thomas Rogers and his wife, Ruth Wetheral (Mudge) Rogers. Ruth Rogers’s brother-in-law and sister, George Herbert Sprague and Mary E. (Mudge) Sprague lived with them. The Rogerses previously had lived at the Hotel Vendôme, and the Spragues previously had lived at 79 Waltham. Both couples had married in 1877, the Spragues in February and the Rogerses in June.

Thomas Rogers was a commission merchant and, in the mid-1880s, was associated with the Essence Manufacturing Company.  George Sprague was a boot and shoe dealer.

During the 1885-1886 winter season, the Rogerses and the Spragues were living at the Hotel Winthrop at 34 Winthrop, with the Rogerses (and possibly the Spragues) spending the latter part of the season in California.

During the season, 250 Commonwealth was the home of brick manufacturer John Henry Hubbell and his wife, Sarah Marietta (Dana) Hubbell. They previously had lived in Lincoln.  By the 1886-1887 season, they had moved to 283 Commonwealth.

The Rogerses and Spragues resumed living at 250 Commonwealth.

During the 1893-1894 winter season, they were again living elsewhere and 250 Commonwealth was the home of Samuel Hoar and his wife, Helen Putnam (Wadleigh) Hoar.  He was an attorney and general counsel of the Boston & Albany Railroad.  In 1893, they had lived at 265 Beacon.  Their primary residence was in Concord and by 1895 they were living there once again.

By the 1894-1895 winter season, the Rogers and Spragues had resumed living at 250 Commonwealth.

In 1909, 250 Commonwealth was the home of Thomas Rogers’s brother-in-law and sister, Francis Manning Stanwood and Louisa Blair (Rogers) Stanwood.  They previously had lived at 527 Beacon.  They also maintained a home in Manchester.  He was president of the Hotel and Railroad News Company, and formerly had been manager and editor of the Boston Journal.  By the 1909-1910 winter season, they had moved to 393 Marlborough.

On June 27, 1910, 250 Commonwealth was acquired from J. Sumner Draper by Francis Bacon Sears. He and his wife, Mary Elizabeth (Sparhawk) Sears, made it their home. They previously had lived at 284 Marlborough.  He was a banker and also served as treasurer of several cotton mills in Georgia and South Carolina.

In October of 1910, Francis Sears filed for (and subsequently received) permission to build a storage building at the rear of the property.

Francis Sears died in August of 1914.  Henry and Katharine Endicott moved back to live with Mary Elizabeth Sears at 250 Commonwealth during the 1914-1915 and 1915-1916 winter seasons.  They then made 131 Marlborough their home.

In about 1916, Mary Elizabeth Sears built a home in Weston on the site of her former home, which had been destroyed by fire in 1906.

She continued to live at 250 Commonwealth and in Weston until her death in 1923.

During the 1924-1925 winter season, 250 Commonwealth was the home of Kenneth Seyton Billings and his wife, Marjory Church (Fish) Billings.  They previously had lived at 378 Marlborough.  He was associated with the iron and steel manufacturing business founded by his father, George Herric Billings. They subsequently moved to Weston.