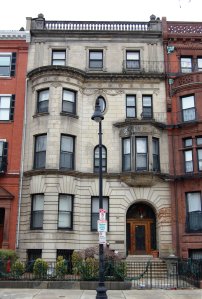 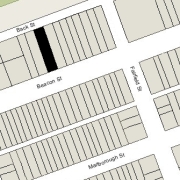 350 Beacon is located on north side of Beacon, between Fairfield and Gloucester, with 348 Beacon to the east and 352 Beacon to the west.

350 Beacon was designed by architect Arthur H. Vinal and built in 1895-1896 for real estate developer and investor Albert Geiger.  He is shown as the owner on the original permit application, dated October 25, 1895, and on the final building inspection report, dated December 15, 1896.  On the inspection report, Albert Geiger is shown as the builder and Keening & Strout Brothers as the masons.

In his Houses of Boston’s Back Bay, Bainbridge Bunting indicates that 350 Beacon may have been built in 1893 but that he is uncertain.  In fact, the lot is shown as vacant on the 1895 Bromley map and the house was completed in 1896.  The original permit application does not show the house number on Beacon and it has been incorrectly filed by the Building Department in the file for 452 Beacon.  However, the permit application number (#458) is shown on the building inspection report, which indicates the address as 350 Beacon and includes floor plans of the house.

Click here for scans of the original floor plans of 350 Beacon, bound with the final building inspection report.

Albert Geiger purchased the land for 350 Beacon on September 27, 1895, from Elisha Slade Converse, who lived at 348 Beacon with his wife, Mary Diana (Edmands) Converse, and their son-in-law and daughter, Costello Coolidge Converse and Mary Ida (Converse) Converse. When he sold the land to Albert Geiger, Elisha Converse included restrictions in the deed specifying that only a single-family dwelling could be built on the land (Albert Geiger had built several apartment houses in the Back Bay), that the rear wall of any building at 350 Beacon could not extend further than the rear wall of 348 Beacon, and that any bay on the rear of 350 Beacon could not extend further than the bay at 348 Beacon.

Click here for an index to the deeds for 350 Beacon, and click here for further information on the land on the north side of Beacon, including the Storrow Memorial Embankment on the Esplanade.

On June 1, 1897, 350 Beacon was purchased from Albert Geiger by Wallace Lincoln Pierce. He and his wife, Stella Louise (Walworth) Pierce, made it their home. They also maintained a home in Milton.

The Pierces’ five children — Walworth, Vassar, Barbara, Parkman Dexter, and Virginia — lived with them at 350 Beacon.

Walworth Pierce married in May of 1911 to Marie Burr Harmon, after which they lived at 13 Bay State Road.  He was secretary and later would become president and (later still) chairman of the S. S. Pierce Company.  Barbara Pierce married in March of 1914 to John Duncan Pearmain, and they moved to Framingham.

Stella Pierce died in April of 1914.  Wallace Pierce continued to live at 350 Beacon with their unmarried children.

Virginia Pierce married in March of 1916 to Nelson Curtis, Jr., and they moved to Brookline.

Wallace Pierce remarried in May of 1916 to Mary Agatha (Day) Greeley, the former wife of Martin H. Greeley.  After their marriage, they lived at 350 Beacon. 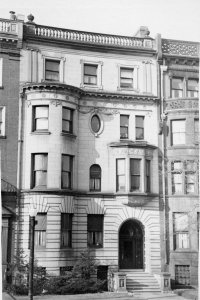 Wallace and Mary Pierce continued to live at 350 Beacon until his death in March of 1920.

On June 11, 1923, 350 Beacon was purchased from Vassar Pierce by wool merchant Ludwig Eiseman (Eisemann). He and his wife, Selma D. (Weil) Eiseman, made it their home. They had lived at 480 Commonwealth in 1920 and at 193 Marlborough in 1919.  They also maintained a home, Sea Bend, on Puritan Road in Swampscott.

Philip Eiseman married in June of 1930 to Marion Babette Becker. After their marriage, they lived at 129 Mt. Vernon.

Ludwig Eiseman died in December of 1932. Selma Eiseman and their two unmarried children continued to live at 350 Beacon during the 1932-1933 winter season. They moved thereafter to the Hotel Sheraton at 91 Bay State Road. She died in August of 1935 at her home in Swampscott.

The house was not listed in the 1934 Blue Book and was shown as vacant in the 1934 City Directory.

On August 24, 1934, 350 Beacon was acquired from Ray C. Johnson by Mary L. McAllister, treasurer of the Buff & Buff Manufacturing Company, makers of surveyors’ instruments. On the same day, she transferred the property to Louis Frederick Augustus Buff, the president of the company. The transaction was not recorded until January 27, 1938, and Mary McAllister remained the assessed owner through that year.

In September of 1934, Mary McAllister filed for (and subsequently received) permission to add a two-car garage at the rear of the property.

350 Beacon became the home of Louis Buff and his wife, and his wife, Lena Gertrude (Frost) Buff.  Their three adult daughters — Laura Edith Buff, a journalist, Marie Louise Buff, an interior decorator, and Lena Frederica Buff, a social worker — lived with them. They previously had lived in Jamaica Plain.

The Buffs moved to Brookline in about 1939. They continued to own 350 Beacon and lease it to others.

By 1940, 350 Beacon was the home of Stephen J. Flynn and his wife, Elizabeth G. (Sweeney) Flynn, who converted the property into a lodging house.  They previously had lived at 383 Commonwealth, where they also had operated a lodging house.  Stephen Flynn was the former City Clerk of Lowell, having served in that position until 1931.

On May 9, 1941, Louis Buff was advised by the Building Department that an inspection had revealed a number of violations that required action before 350 Beacon could be used as a lodging house.

Elizabeth Flynn subsequently filed applications in June of 1943, and again in February of 1944, seeking permission to convert the property from a single-family dwelling into a lodging house.  However, both applications were abandoned.

The Flynns continued to live at 350 Beacon until about 1946, apparently continuing to operate it as a lodging house without establishing its legality as such. They subsequently moved to New Haven but continued to own 350 Beacon and lease it to others.

By 1947, 350 Beacon was the home of Robert Theodore Markson and his wife, Joyce Olivia (Krantz) Friedman Markson. He was secretary-treasurer of Markson Brothers, men’s and women’s retail clothiers. They appear to have occupied the house as a single-family dwelling. They previously had lived at 142 Chestnut.

Elizabeth Flynn died in the late 1940s and on November 1, 1950, 350 Beacon was acquired from Stephen Flynn by Robert and Joyce Markson.

They continued to live there until 1955, when they moved to Beverly Farms. In the mid-1950s, Joyce Markson was the owner of the Monsieur Marcel hair salon at 73 Newbury, which she renamed the Caritas salon in June of 1957.

In June of 1955, Robert Markson applied for (and subsequently received) permission to convert 350 Beacon from a single-family dwelling into a single-family dwelling and four doctors’ offices.  In its June 24, 1955, decision allowing the conversion, the Board of Appeal noted that the “appellant desires to sell the building in question as he no longer desires to occupy it as his home,” has been unable to find a purchaser for it as a single-family dwelling, but “there is a doctor, however, who will purchase said structure provided the necessary permits can be obtained to occupy same for his home and four doctors’ offices — one for himself and three offices for his associates.”

On September 27, 1955, 350 Beacon was purchased from the Marksons by Dr. David Landau, a physician. In August of 1956, he applied for (and subsequently received) permission to convert the property from a single-family dwelling and four doctors’ offices into twelve doctors’ offices and two apartments.  He subsequently maintained his offices there, but lived in Newton and then in Cambridge. He also may have kept one of the apartments as a Boston residence. He previously had lived and maintained his office at 31 Bay State Road.

On April 1, 1985, 350 Beacon was acquired from James McGraw and Roger Senter by real estate dealer George P. Demeter, trustee of the Demeter Realty Trust. In October of 1990, he filed for (and subsequently received) permission to convert the property from ten professional offices and two apartments into sixteen apartments.

On February 1, 1996, George Demeter transferred 350 Beacon to the Pierce Limited Partnership. of which he was the president. At the same time, he also transferred 397 Beacon and 1 Gloucester to the same limited partnership.

In June of 2001, the Pierce Limited Partnership applied for (and subsequently received) permission to construct a penthouse and join it to the fourth floor apartment, creating a duplex apartment.

On June 14, 2003, the Pierce Limited Partnership transferred 350 Beacon to Maxi Realty, LLC, the manager of record of which was Pierce, Inc., of which George Demeter was president and treasurer. On December 30, 2015, Maxi Realty transferred the property to the 350 Beacon Street LLC.

350 Beacon remained an apartment building in 2016. 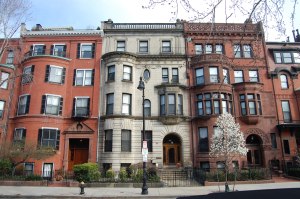