As originally laid out, the portion of Commonwealth between Massachusetts Avenue and Charlesgate East had a curved roadway intended to provide a transition from the formal design of the preceding blocks to the parklands in the Back Bay fens. It was divided into uneven islands and included a strip of green space in front of 371-387 Commonwealth and a small triangular island at the eastern end on which the statue of Leif Ericson (Erikson) was located (dedicated in 1887). In 1917-1918, the roadway was straightened and widened, the central mall design of the previous blocks was extended to Charlesgate East, the green space in front of 371-387 Commonwealth eliminated, and the Ericson statue was relocated to the Charlesgate East end of the block.

George Wheatland, Jr., purchased the land for 381-391 Commonwealth and 430-440 Marlborough on June 20, 1885, from Henry M. Whitney. It was part of a parcel Henry Whitney had acquired in two transactions, on November 24, 1882, and on March 20, 1885, all part of a tract of land originally purchased from the Boston Water Power Company on June 1, 1880, by a real estate investment trust formed by Francis W. Palfrey, Francis A. Osborn, and Grenville T. W. Braman.

On December 12, 1888, 383 Commonwealth was purchased from George Wheatland, Jr., by real estate dealer Samuel Horatio Whitwell. He was unmarried and lived at 111 Commonwealth with his brother and partner, Henry Whitwell, and their sister, Sophia Louisa Whitwell.

By the 1889-1890 winter season, 383 Commonwealth was the home of brick manufacturer John Henry Hubbell and his wife, Sarah Marietta (Dana) Hubbell. They previously had lived at 283 Commonwealth. Sarah Marietta Hubbell’s sister, Caroline Winchester Dana, lived with them.

They continued to live at 383 Commonwealth during the 1893-1894 winter season, but moved thereafter, probably to Coal Run, Ohio, where Sarah Marietta Hubbell died in September of 1894 (she and her sister were born Waterford, Ohio). Henry Hubbell died in October of 1895 at the Hotel Vendöme.

During the 1894-1895 winter season, 383 Commonwealth was the home of Eben Wright and his wife, Leta (Pell) Wright. Their usual residence was in New York City. He was a collector and expert on Medieval tapestries, carvings, and art, and had just lent the Museum of Fine Arts five Flemish tapestries for display.

By the 1895-1896 winter season, 383 Commonwealth was the home of Miss Carrie Thirza Fitch. She previously had lived at 34 Fairfield. She initially leased the house from Samuel H. Whitwell and then, on July 23, 1900, it was purchased from him by a trust established under the will of her father, Jonas Fitch.

During the 1907-1908 winter season, she was living elsewhere and 383 Commonwealth was the home of wholesale cotton merchant John Silsbee Lawrence and his wife, Emma (Atherton) Silsbee. They had married in April of 1907 and 383 Commonwealth probably was their first home together. Prior to their marriage, he had lived at 140 Beacon. By the 1908-1909 season, the were living at the Lenox Hotel at 61 Exeter.

By the 1908-1909 winter season, Carrie Fitch had resumed living at 383 Commonwealth. She continued to live there during the 1918-1919 season, but moved thereafter to The Charlesgate at 535 Beacon.

By 1920, 383 Commonwealth was the home of Anna K. (Brigham) Hall, widow of leather merchant Henry Lyon Hall, and their four children: Henry Lyon Hall, Jr., Anna Brigham Hall, Frank B. Hall, and Mary C. Hall. Prior to her husband’s death in June of 1917, they had lived in Dorchester.

Henry L. Hall, Jr., a leather salesman, married in 1924 to Edith Page Blanchard. After their marriage, they lived in Newton. Anna Brigham Hall married in March of 1929 to John Sewall Hooper. After their marriage, they lived in Brookline, where he died in December of 1929.  At the time of the 1930 US Census, Anna Hooper and their infant daughter, Dorothy, were living at 383 Commonwealth with her mother and unmarried siblings.

Anna Hall, Frank and Mary Hall, and Anna and Dorothy Hooper continued to live at 383 Commonwealth during the 1930-1931 winter season, but moved thereafter to Hingham.

By 1932, it was the home of Stephen J. Flynn and his wife, Elizabeth G. (Sweeney) Flynn, who operated it as a lodging house. They previously had lived in Lowell, where he had served as City Clerk until 1931. They continued to live at 383 Commonwealth and to operate it as a lodging house until the late 1930s. By 1940, they were living at 350 Beacon.

383 Commonwealth was shown as vacant in the 1940 City Directory.

In April of 1942, the Christian Science Church applied for (and subsequently received) permission to convert 383 Commonwealth from a single-family dwelling into a lodging house, legalizing its prior use.

In December of 2017, the trust received approval to increase the number of apartments from five to six by building a new unit in the basement.

383 Commonwealth remained an apartment building in 2018. 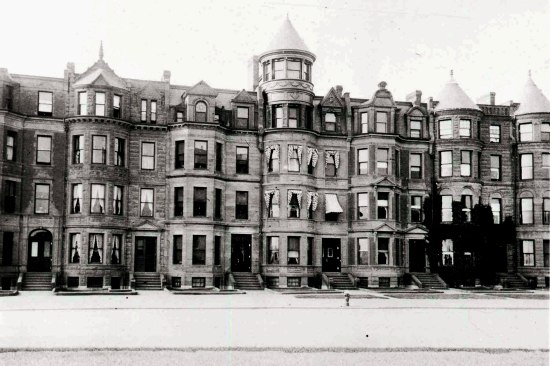