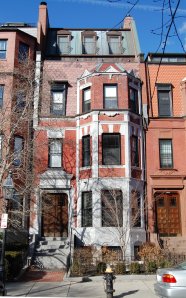 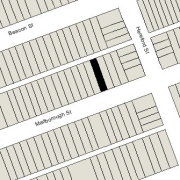 Click here for an index to the deeds for 373 Marlborough, and click here for further information on the land on the north side of Marlborough between Hereford and Massachusetts Avenue.

George Wheatland, Jr., subsequently built the twelve houses at 369-391 Marlborough on 276 feet of the combined 280.58 foot parcel (the surplus 4 feet to the east and the 0.58 feet to the west were sold by his father to others). As the houses were completed, William D. Pickman and the estate of William P. Fay (who had died in March of 1879) transferred their two-thirds interest to George Wheatland, Sr. He subsequently sold the houses to individual purchasers.

On November 15, 1880, 373 Marlborough was purchased from George Wheatland, Sr., by John Lucas Emmons, a retired dealer in West Indies goods and wholesale grocer. He and his wife, Caroline Draper (Vose) Emmons, made it their home. They previously had lived at 1 Burroughs Place.

Caroline Emmons died in January of 1882, soon after they moved to 373 Marlborough.  John Emmons continued to live there with their unmarried daughters, Mary Blake Emmons and Helen Pickering Emmons.

Mary Emmons married in June of 1885 to George Woodman Wheeler, a widower.  They lived with her father and sister at 373 Marlborough.  George Wheeler was a wholesale dealer in paints, oils, and varnishes.

George Wheeler, his son, John Blake Emmons Wheeler, and his sister-in-law, Helen Emmons, continued to live at 373 Marlborough. On April 17, 1896, the trust established under John Emmons’s will transferred the property to John B. E. Wheeler.

John B. E. Wheeler married in April of 1912 to Kathleen Page and they moved to Brookline. He subsequently became assistant treasurer of his father’s paint, oil, and varnish business, and in about 1915 they moved to Weston.

George Wheeler and Helen Emmons continued to live at 373 Marlborough.

Helen Emmons died in February of 1918.

George Wheeler moved soon thereafter to live with his son and daughter-in-law in Weston. He died in August of 1919.

By the 1919-1920 winter season, 373 Marlborough was the home of Harvey Hollister Bundy and his wife, Katharine Lawrence (Putnam) Bundy.  In 1917, they had lived in Cambridge.

On January 31, 1923, 373 Marlborough was acquired from William J. Stober by Eda (Friedman) Hecht, the wife of wool merchant Simon Elias Hecht. They previously had lived in Brookline. They also maintained a home in Clifton.

They continued to live at 373 Marlborough until about 1949, when they moved to an apartment at 256 Marlborough.

On March 10, 1949, 373 Marlborough was purchased from Eda Hecht by Andrew Hartwell Elliott and his wife, Ethel Blanche (Carter) Elliott. They lived at 31 Park Drive. He was a civil engineer with the Department of Public Works.

In March of 1949, Andrew Elliott applied for (and subsequently received) permission to convert the property from a single-family dwelling into four apartments.

Andrew Ellliott died in October of 1967 in Brookline.

On July 20, 1989, 373 Marlborough was purchased from Ethel Elliott by Allen Bertram Schwartz and his wife, Ruth S. (Abrams) Schwartz, trustees of the Community Finance Company. In the same transaction, they also purchased 306 Beacon.

On May 1, 1996, 373 Marlborough was purchased from William R. Haney, Sr., by the Brantam Corporation (Branka Milosevic, president).

In September of 1996, it applied for (and subsequently received) permission to add a penthouse story and a four story bay window at the rear, running the entire height of the house. In its November 26, 1996, decision allowing the additions, the Board of Appeal indicated that “[t]he premises have been vacant for 12 years and are heavily water damaged. In order to make total renovation feasible, more floor space will be created by adding another story and a four story bay in the rear.”