390 Commonwealth was designed by architect Edward B. Stratton and built in 1908-1909 as a seven story hotel, the Hotel Puritan, for boot and shoe manufacturer and real estate investor William Ball Rice. He and his wife, Emma Louise (Cunningham) Rice, lived in Quincy. He is shown as the owner of 390 Commonwealth (shown as 398 Commonwealth) on the original building permit application, dated August 24, 1908.

The Hotel Puritan was built on two lots, one with a frontage of 100 feet at 394-398 Commonwealth, and the other with a frontage of 90 feet at 388-392 Commonwealth. Both properties were acquired by the Avenue Real Estate Trust, formed by William B. Rice on January 15, 1908, with John D. Hardy as trustee. The 100 foot lot was acquired on January 15, 1908, from the estate of Henry Lee, and the 90 foot lot was acquired on May 8, 1908, from the estate of J. Malcolm Forbes. On July 27, 1908, the Avenue Real Estate Trust purchased a third lot behind the other two, at 425 Newbury, with a 200 foot frontage on Newbury. All three lots previously had changed hands and originally were part of one of four parcels purchased from the Boston Water Power Company on October 15, 1880, by Henry Melville Whitney, Grenville Temple Winthrop Braman, and Henry Dwight Hyde, trustees of The Park Entrance Lands Trust.

Click here for an index to the deeds for 388-390 Commonwealth, and click here for further information on the land on the south side of Commonwealth between Massachusetts Avenue and Charlesgate East.

It appears that the hotel originally was designed to occupy the entire 190 feet, inasmuch as the architect’s rendering that appeared in the August 1911 edition of Architecture and Building shows seven bays, with the entrance centered on the middle (fourth) bay. It also shows the building extending the full distance between the Hotel Somerset annex at 400 Commonwealth to the west and 386 Commonwealth to the east. This drawing was used by the hotel in later advertising.

As built, however, the building occupied a frontage of 130 feet on Commonwealth. The eastern two bays were omitted, leaving a vacant lot at 388 Commonwealth with a frontage of 60 feet. The entrance to 390 Commonwealth remained in the fourth bay from the west, creating an asymmetrical façade. Although the August 1911 Architecture and Building article included the original drawing with seven bays, it also included a floor plan showing the main floor as it was built, with only five bays.

In his Houses of Boston’s Back Bay, Bainbridge Bunting incorrectly indicates that there were two six story, six family apartment buildings designed by Arthur Vinal and built in 1899. one at 386 Commonwealth and a second at 388 Commonwealth. In fact, there was only one building built, at 386 Commonwealth.

A January 31, 1909, New York Times article described the building, still under construction, in some detail. “It is a fire-proof structure seven stories in height, in the French Renaissance style, of limestone and red Norman brick, with a mansard roof of graduated slates, and will contain about 300 rooms and 170 baths. There is a spacious entrance on the first floor, between high stone posts surmounted by lanterns and ornamented by wrought iron grills and flower boxes.”

An article in the August 1911 issue of Architecture and Building provided details on the interior, noting that the first story included “ample public space with several small suites. The vestibule is finished in stone and the lobby in Circassian walnut. One of the main dining rooms is decorated in old gold, and the other in blue and silver. There are private dining-rooms also.”  The upper stories have suites which are adaptable “to any necessary expansion into family suites of various sizes. The ample court space at the rear, supplementary to the street frontage, permits of amply lighted rooms throughout. The architect has employed the bay construction to good advantage, both for interior lighting and for the architectural effect in the façade. The lighting fixtures were designed and made by Bigelow Kennard & Co. to harmonize with the decoration.”

William Rice died in May of 1909, before the Hotel Puritan opened. It continued to be owned by the Rice family through its Avenue Real Estate Trust. As of 1947, the trustees were William and Emma Rice’s son, Harry Lee Rice, and his two sons, William Ball Rice and Edmund Rice.

On July 1, 1947, the Hotel Puritan (including 388-390 Commonwealth and 425 Newbury) was acquired from the Avenue Real Estate Trust by Abraham M. Sonnabend, and on the same date he transferred the property to the Hotel Puritan, Inc., of which he served as president.

Advertisement from the 1922 Automobile Blue Book

In its October 31, 1952, article on the opening of the new, expanded hotel, the Boston Globe wrote: “The Somerset Hotel took on a ‘new look’ yesterday with the official opening of its new lobby and entrance. The consolidation of the Somerset with the Hotel Puritan has made possible one large hostelry containing 524 rooms. The main lobby, constructed with a coral terrazzo floor, plastered green walls, and a ceiling of the latest acoustical material, has a 33-foot curved desk of green Italian marble and two tone plate glass. Iron trim stairways connect with the terrace lobby, formerly the street level of the Puritan, and with the lower level of the Puritan, where a dining room, cocktail lounge and coffee shop are located. Smart shops open off the terrace lobby.”

In November of 1957, the hotel applied for (and subsequently received) permission to install a “macademized open-air parking lot” on the vacant lot at 388 Commonwealth.

An October 20, 1960, Boston Globe article on the impending sale indicated that it “stems from the fact that the contract which H. C. A. [Housing Corporation of America] has with Prudential Insurance Company to run the 1000-room hotel in its huge Back Bay development requires H. C. A. to confine its local hotel activities to the Prudential operation.”

On January 31, 1966, the re-acquisition of the properties was achieved through a foreclosure of the mortgage given by Louis Berry and his partners to the Cleveland Hotel Corporation, which took possession of the properties and transferred them on the same day to the S. H. Corp.

The Hotel Corporation of America resumed operation of the properties and in 1966-1967 it constructed a 352 car garage at 425 Newbury.

On October 15, 1971, the Boston Globe reported that a “preliminary understanding” had been reached to sell the Somerset Hotel to real estate developer Pasquale Franchi, “who reportedly plans to renovate the Somerset into a luxury apartment building.” He also was in the process of renovating the Hotel Vendôme.

Over the next three years, Pasquale Franchi converted the buildings into 187 apartments, a night club, shops, and offices. The entirety of 390 Commonwealth was devoted to office and commercial space.

On July 19, 1976, the Savings Bank Trust Company foreclosed on a mortgage given by The Somerset Building, Inc., and took possession of the property.

The properties subsequently changed hands, including going through foreclosure again, and on January 29, 1982 were acquired by the 400 Commonwealth Avenue Apartments LP. 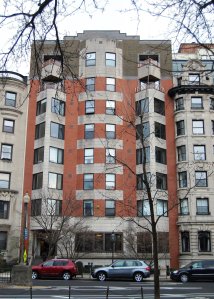 On March 30, 1983, 388-390 Commonwealth were purchased from the 400 Commonwealth Avenue Apartments LP by Frederic W. Rust, trustee of the Puritan Investment Trust. The purchase included an interest in the Somerset garage at 425 Newbury.

In October of 1985, Puritan Investment Trust applied for (and subsequently received) permission to establish the occupancy of 390 Commonwealth as 91 apartments, swimming pool, and general offices.