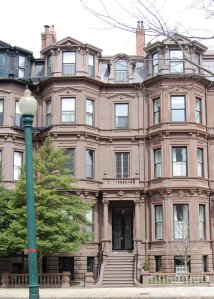 39 Commonwealth was built for Isaac Danforth Farnsworth. He was treasurer of the Boston Wharf Company.

Click here for an index to the deeds for 39 Commonwealth, and click here for further information about the land between the north side of Commonwealth and Alley 423, from Berkeley to Clarendon.

Construction of 39 Commonwealth probably began soon after the land was acquired by Isaac Farnsworth in July of 1871, and work on 37 Commonwealth may also have begun at that time, prior to Elisha Atkins taking title to the 28 foot lot. An August 24, 1871, Boston Traveller article included both houses among the work underway by architect Nathaniel J. Bradlee.

By 1873, Isaac Farnsworth had made 39 Commonwealth his home. He was unmarried and previously had lived at the Revere House hotel.

By 1880, Isaac Farnsworth had been joined at 39 Commonwealth by Mrs. Caroline Willard (Pierce) Ryan, who served as his housekeeper.  She was the former wife of Edward George Ryan, a Milwaukee attorney and Chief Justice of the Wisconsin Supreme Court.  Their daughters, Agnes Ryan and Caroline Willard Ryan, lived with her at 39 Commonwealth.  Caroline Ryan married in June of 1884 to Joseph Leland Keith, publisher of the New England Farmer newspaper; after their marriage, they lived in Grafton, Massachusetts.

Isaac Farnsworth continued to live at 39 Commonwealth until his death in January of 1886. In his will, he named Agnes Ryan as his residual legatee.

Caroline (Pierce) Ryan and Agnes Ryan continued to live at 39 Commonwealth during the 1886-1887 winter season,  but moved soon thereafter to the Hotel Victoria at 273 Dartmouth.

In 1887, 39 Commonwealth became the home of Henry Mason and his wife, Helen (Palmer) Mason, who rented the property until March 1, 1888, when he purchased it from the estate of Isaac Farnsworth. The Masons had lived at 116 Commonwealth during the 1886-1887 winter season and in Brookline before that. They also maintained a residence at Phillips Beach in Swampscott.

Henry Mason was a founder and partner in Mason & Hamlin, manufacturers of organs and pianos.

On May 8, 1899, 39 Commonwealth was purchased from the estate of Henry Mason by cotton manufacturer and merchant George Dexter. He and his wife, Sarah Rogers (Endicott) Dexter, made it their home. They previously had lived in the Longwood district of Brookline. They also maintained a home in Prides Crossing.

The Dexters’ son, William Endicott Dexter, a lawyer, lived with them until his marriage in April of 1904 to Mary Elizabeth Lindsay.  After their marriage, they moved to 18 Marlborough.

George Dexter died in July of 1910. Sarah Dexter continued to live at 39 Commonwealth until her death in January of 1916.

On April 20, 1916, 39 Commonwealth was purchased from George Dexter’s estate by Miss Katherine Eliot Bullard (born Catharine Norton Bullard). She lived there with her first cousin, Miss Ellen Twistleton Bullard. Katherine Bullard was the daughter of William Story Bullard and Ellen Bullard was the daughter of Stephen Hopkins Bullard. Their fathers had been East India shipping merchants in partnership with Henry Lee, Jr. Katherine and Ellen Bullard previously had lived at 3 Commonwealth with Katherine Bullard’s widowed mother, Louisa (Norton) Bullard, who died in September of 1915.

Katherine Bullard died in December of 1920. Ellen Bullard continued to live at 39 Commonwealth until her death in June of 1959.

On December 24, 1959, 39 Commonwealth was acquired from the estate of Ellen Bullard by Chester Hammond. He previously had lived in Brookline. He was president of H. F. Livermore Corporation, makers of textile manufacturing machinery, and had served as an military aide to President Franklin Delano Roosevelt from 1936 through 1945. He continued to live at 39 Commonwealth until about 1964, when he moved back to Brookline.

On September 26, 1963, 39 Commonwealth was purchased from Chester Hammond by Dr. Edward J. Baldi, a physician, and his wife, C. Phyllis Baldi. He also maintained his medical offices there. They previously had lived (and he had maintained his office) at 431 Beacon.

In February of 1964, he applied for (and subsequently received) permission to convert the house from a single-family dwelling into seven apartments.

On March 29, 1968, the roof and portions of the top story were damaged by the fire that destroyed the First and Second Church at the corner of Marlborough and Berkeley Streets.

On September 30, 1968, 39 Commonwealth was purchased from the Baldis by Edward Cass, trustee of the 5 West Hill Place Trust. In June of 1975, he applied for (and subsequently received) permission to legalize the occupancy as nine apartments, noting that “this was an existing condition when current owner purchased building.”

On October 14, 2005, the Commonwealth Avenue Real Estate LLP entered into a “Preservation Restriction Agreement” with the National Architectural Trust for the purpose of preservation of 39 Commonwealth’s exterior.

39 Commonwealth remained an apartment building in 2015. 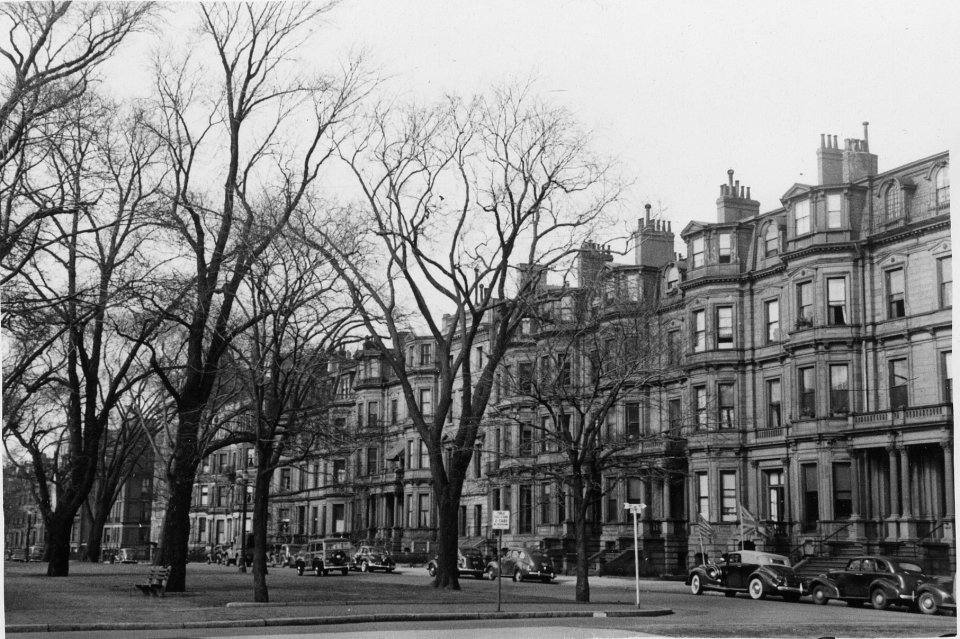