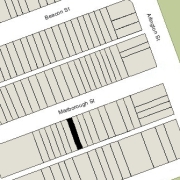 An August 19, 1865, article in the Boston Daily Advertiser reported that “Mr. E. C. Parker has nearly completed two houses, brick with brown-stone trimmings, for John Revere, Esq.” There is no carpenter-builder or mason named E. C. Parker listed in the 1864-1865 City Directories, but he may be Carlton Parker, who was a mason. John Revere was treasurer and later president of the Revere Copper Company. He and his wife, Susan Tilden (Torrey) Revere, lived at 93 Beacon and later at 156 Beacon.

Ann D. Torrey purchased the land for 18 Marlborough from Samuel Dalton on May 12, 1864; her sister purchased the land for 20 Marlborough from him on the same day. The lots were part of a larger parcel Samuel Dalton had purchased on March 26, 1863, from Caleb William Loring and Charles F. Choate, trustees for a real estate investment trust formed by them with Francis B. Hayes and Franklin Evans. The parcel sold to Samuel Dalton was part of a larger tract of land with a 287 foot frontage extending west to Berkeley Street that the trust had purchased from the Commonwealth of Massachusetts on May 2, 1860.

Click here for an index to the deeds for 18 Marlborough, and click here for further information about the land between the south side of Marlborough and Alley 422, from Arlington to Berkeley.

Ann Torrey lived at 18 Marlborough from the time it was built. In October of 1866, she and her sister filed suit against John Mixer, who had built 16 Marlborough in a manner which violated the building design restrictions contained in the original deeds from the Commonwealth of Massachusetts. As a result of the litigation, the front façade of 16 Marlborough was rebuilt.

During the 1877-1878 and 1879-1879 winter seasons, Ann Torrey traveled in Europe with Sarah Linzee and her two unmarried daughters, Elizabeth and Marian Linzee. While they were away, 18 Marlborough was the home of attorney William Fisher Wharton and his wife, Fanny (Pickman) Wharton. They had married in October of 1877, and 18 Marlborough probably was their first home together. Prior to their marriage, he had lived with his parents at t 127 Beacon.  By 1880, they had moved to a new home they had built at 133 Commonwealth. Ann Torrey and the Linzees returned in September of 1879 and Ann Torrey resumed living at 18 Marlborough. 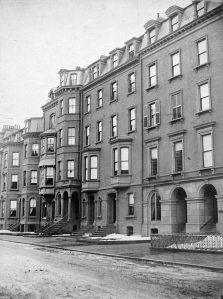 She continued to live there until about 1903, when she moved next door to 20 Marlborough to live with her niece, Elizabeth Linzee, after her sister Sarah Linzee’s death in February of that year. Ann Torrey continued to own 18 Marlborough and lease it to others.

During the 1903-1904 winter season, 18 Marlborough was the home of Arthur Russell Sharp and his wife, Mary (Sparks) Sharp.  He had been affiliated with the Canoe River Cotton Mills in Taunton until 1903.  In late 1903 or early 1904, he became general manager of the New England Yarn Company, and they moved back to Taunton.  In about 1908, they purchased 52 Commonwealth as their Boston home, while also retaining a home in Taunton.

By the 1904-1905 winter season, 18 Marlborough was the home of lawyer William Endicott Dexter and his wife, Mary Fitzhugh (Lindsay) Dexter.  They had married in April of 1904 and 18 Marlborough probably was their first home together.   Prior to their marriage, he had lived at 39 Commonwealth with his parents, George and Sarah Rogers (Endicott) Dexter.

During the 1907-1908 winter season, 18 Marlborough was the home of attorney Richard S. Dow and his wife, Abbie (Rawson) Dow.  In 1907, they had lived at 32 Fairfield.  They also maintained a home in Marion.  In October of 1907, they purchased 77 Marlborough and moved there several months later after the existing lease on the property expired. 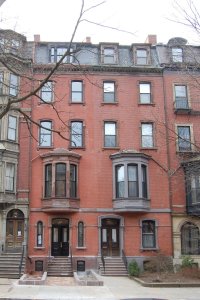 By the 1909-1910 winter season, 18 Marlborough was the home of Mrs. Anna Maria (Warren) Glidden, the widow of John Murray Glidden, who had died in March of 1906.  He was a commission merchant and president of the Pacific Guano Company.  Prior to his death, the Gliddens probably had lived in Newcastle, Maine.  She continued to live at 18 Marlborough in 1911, but by 1912, had moved to 174 Marlborough.

By the 1911-1912 winter season, 18 Marlborough was the home of Ann Torrey’s nephew, banker John Torrey Linzee, and his wife Anita Homer (Manson) Linzee. They previously had lived at 229 Marlborough.  John Linzee was son of Thomas and Sarah (Torrey) Linzee. John T. Linzee also served as an executor of Ann Torrey’s estate.

John and Anita Linzee continued to live at 18 Marlborough until his death in December of 1917. Anita Linzee moved soon thereafter to an apartment at 261 Beacon.

On July 6, 1920, 18 Marlborough was acquired from Marian Weld by Carl Helmershausen Skinner, a retail jeweler.  He and his wife, Isabelle (Belle) (Fay) Skinner, made it their home. They had married in 1920 or 1921, and 18 Marlborough probably was their first home together. They continued to live there in 1927, but had moved to Brookline by 1928.

On February 9, 1927, Carl Skinner assigned all of his property — including 18 Marlborough and the merchandise, furniture, and fixtures at his jewelry store at 300 Boylston – to Robert A. B. Cook and Reginald C. Heath to be sold for the benefit of his creditors. 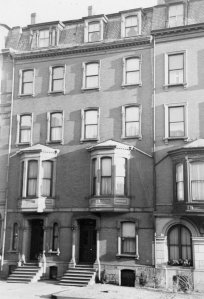 On May 11, 1927, 18 Marlborough was acquired by Horace C. Hunt, who purchased it at public auction, and on June 27, 1927, it was acquired from Horace Hunt by Annie Bartlett (Shaw) Andrew, the wife of George Clapp Andrew. They lived at 28 Marlborough.

On July 19, 1927, 18 Marlborough was purchased from Annie B. Andrew by Nancy Warburton (Scott) Blumer, the wife of cotton broker and mill owner Thomas Spriggs Blumer. They previously had lived at 127 Beacon.  They also maintained a home in Manchester.

The Blumers continued to live at 18 Marlborough until about 1947.

On December 11, 1947, 18 Marlborough was acquired from Louis Binda by Marion McBurney (Schlesinger) Whiting, the widow of Jasper Whiting. Jasper Whiting had been a chemical company executive and an inventor. Among his inventions were a process for making Portland cement from blast furnace slag and the “Whiting Cell” used in the manufacturer of chlorine gas.

Marion Whiting continued to live at 18 Marlborough until about 1962. The house was shown as vacant in the 1963 City Directory.

On April 17, 1963, 18 Marlborough was purchased from Marion Whiting by Lawrence T. Perera. He and his wife, Elizabeth Perera, made it their home. An attorney, Lawrence Perera was one of the five members of the Back Bay Architectural Commission appointed when it was formed in 1967.

On June 12, 2013, 18 Marlborough was purchased from BosProp Investors, LLC, by Daniel S. Lynch and his wife, Elizabeth Lynch.

18 Marlborough remained a single-family dwelling in 2015.