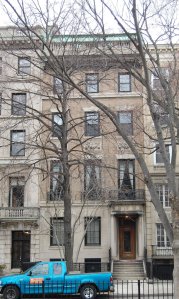 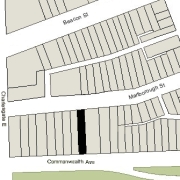 401 Commonwealth was designed by Peabody and Stearns, architects. and built in1901-1902 by McNeil Brothers, carpenters, for wholesale druggist Atherton Thayer Brown and his wife, Hannah King (Davenport) Brown. He is shown as the owner on the original building permit application, dated August 5, 1901 (with the address indicated as 399 Commonwealth).

The rear of the lot on which 401 Commonwealth was built extends north to Marlborough Street and has a secondary street address of 450 Marlborough.

Atherton T. Brown purchased the land for 401 Commonwealth on June 8, 1895, from the estate of William G. Saltonstall, It was the western half of a lot William Saltonstall had purchased on January 13, 1886, from a real estate investment trust formed by Francis W. Palfrey, Francis A. Osborn, and Grenville T. W. Braman, part of a tract of land the trust had purchased on June 1, 1880, from the Boston Water Power Company.

Plans for the house — including a rear (Marlborough Street) elevation, longitudinal section, floor plans, framing plans, and detail drawings — are included in the Peabody and Stearns Collection in the Boston Public Library’s Arts Department (reference PS/MA.035).

Click here to view selected drawings from the original plans for 401 Commonwealth. 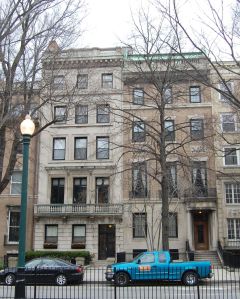 By the 1902-1903 winter season, Atherton and Hannah (Davenport) Brown had made 401 Commonwealth their home. They previously had lived in Roxbury.

The Browns’ two children, Alice Woodward Brown and Davenport Brown, lived with them, as did Elizabeth Bowen Brown, Atherton Brown’s daughter with his first wife, Sarah Ann (Kirtley) Brown, who had died in September of 1872.

Alice Brown married on April 18, 1906, to Dr. Robert Laurent De Normandie, an obstetrician, who lived and maintained his office at the Hotel Cambridge at 483 Beacon. After their marriage they lived in an apartment at 31 Massachusetts Avenue and then at 357 Marlborough.

Davenport Brown, a real estate trustee, married on April 25, 1906, in Washington DC to Marie McKenna. After their marriage, they also lived in an apartment at 31 Massachusetts Avenue and then at 389 Beacon.

On the day of Davenport Brown’s wedding, while the family was in Washington DC, 401 Commonwealth was seriously damaged by a fire.  The Boston Evening Transcript reported that the fire “had evidently started in a pantry on the street floor, probably from an electric heater” and “when the first firemen arrived the building was all in flames and fire was shooting through the roof, having found vent from the ground floor through the light well.” On May 14, 1906, the Transcript reported that it had been learned that “valuable jewelry was stolen from the house” the night of the fire.

By the 1906-1907 winter season, Hannah Brown had moved to 480 Beacon and her step-daughter, Elizabeth, had moved to The Westgate at 541 Commonwealth.

On June 7, 1907, 401 Commonwealth was purchased from Hannah Brown by Alexander Steinert. He and his wife, Bessie (Shuman) Steinert, made it their home. They previously had lived at 585 Beacon. They also maintained a home, Stoneledge, in Beverly Cove.

Alexander Steinert was a piano and music dealer in the firm of M. Steinert & Sons, founded by his father, Morris Steinert.  The Steinerts also manufactured pianos through the Jewett Piano Company, sold under various names. In 1896, the firm built “Steinert Hall” at 162 Boylston which combined the company’s sales rooms and a performance hall.

Russell Steinert was associated with his family’s businesses, serving as president of the Jewett Piano Company and secretary of M. Steinert & Sons.  He married in December of 1916 to Louise F. Krug.  After their marriage, they lived in Brookline. He died in June of 1919 from injuries incurred while diving in shallow waters in Ipswich.

Alexander Steinert graduated from Harvard in 1922 and moved to Paris to study music. He married in January of 1926 in Nice to Sylvia Curtis. He subsequently became a musician and composer.

Bessie Steinert died in August of 1924.  Alexander Steinert continued to live at 401 Commonwealth with his son, Robert, who had succeeded his brother, Russell, as president of the Jewett Piano Company.

Robert Steinert married in August of 1925 to Lucy Pettingill Currier.  After their marriage, they lived with his father at 401 Commonwealth during the 1925-1926 and 1926-1927 winter seasons.  During the 1927-1928 season they lived at 486 Beacon and also at 8 Commonwealth with Lucy Steinert’s parents, Guy Wilbur Currier and Marie Glass (Burress) Currier.  Robert and Lucy Steinert also maintained a home at Beverly Farms.

Alexander Steinert married again in August of 1926 to Lena (Friedman) Leviseur, widow of leather merchant Louis Leviseur.  After their marriage, they lived at 401 Commonwealth and also maintained a home in Beverly Cove.

Alexander Steinert died in November of 1933.  Lena Steinert continued to live at 401 Commonwealth, joined by her son, Frederick J. Leviseur. 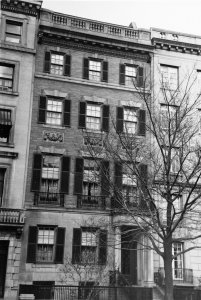 On February 11, 1936, Robert Steinert, as trustee under his father’s will, transferred 401 Commonwealth to The Alexander Corporation, for which he served as president and treasurer.

On December 30, 1947, The Alexander Corporation transferred 401 Commonwealth and the Steinerts’ property in Beverly to the First National Bank of Boston. Although not indicated in the deed, it appears likely that it was acting as a trustee or in a comparable capacity for the Steinert family.

Lena Steinert continued to live at 401 Commonwealth until her death in May of 1968.

On December 26, 1968, the First National Bank of Boston transferred 401 Commonwealth to the Massachusetts Bay United Fund.

On January 10, 1970, 401 Commonwealth was purchased from the United Fund by Robert J. Barstow, trustee of the Barstow Realty Trust. In November of 1969, as a condition to finalizing the sale, the United Fund applied for (and subsequently received) permission to convert the property from a single-family dwelling “to an office building for architects, including blueprinting, and for engineers.”

Robert Barstow, president of Barstow Engineering, maintained a residence and offices at 401 Commonwealth, and leased space to residential and commercial tenants.

On October 8, 2004, 401 Commonwealth was purchased from Robert Barstow by Stalin Colinet. On October 20, 2004, he transferred the property to Asa G. Barsoumian, trustee of the ARSTAR Realty Trust.

In January of 2005, Ara Barsoumian filed for (and subsequently received) confirmation of the occupancy of 401 Commonwealth as a single-family dwelling and offices, there having been a lack of clarity because the legal occupancy approved in 1969 had been only for offices, but the property also had been used as a residence.

On April 7, 2006, 401 Commonwealth was purchased from Ara Barsoumian by the Marl-Arden LLC (William R. Hettinger and Corinna Hettinger, managers).

401 Commonwealth remained assessed as a single-family dwelling in 2021.