480 Beacon is located on the north side of Beacon, between Hereford and Massachusetts Avenue, with 478 Beacon to the east and 482 Beacon to the west.

Lucy Ellis purchased the land for 480 Beacon on March 10, 1892, from the Boston and Roxbury Mill Corporation.

By the 1893-1894 winter season, Lucy Ellis had made 480 Beacon her home.  She was an artist.  She lived at the Hotel Oxford (southeast corner of Exeter and  Huntington) during the previous season, and before that at 330 Boylston (formerly number 114 Boylston) with her brother, Dr. Calvin Ellis, a physician and Dean of Harvard Medical School.  He had died in December of 1883. 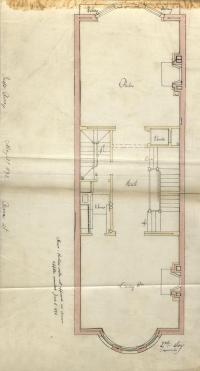 Lucy Ellis continued to live at 480 Beacon until her death in June of 1899.  She left 480 Beacon to Harvard University.

On July 15, 1901, 480 Beacon was purchased from Harvard by Mary Alison (Bixby) Hill, the wife of Edward Burlingame Hill. They previously had lived at 321 Beacon. They also maintained a home in Francestown, New Hampshire.

Edward Hill was a music teacher and composer of orchestral and choral works.  He later would become a professor of music at Harvard.

The Hills continued to live at 480 Beacon during the 1905-1906 winter season, but moved thereafter to 4 Marlborough. Alison Hill continued to own 480 Beacon and lease it to others.

By the 1906-1907 winter season, 480 Beacon was the home of Hannah King (Davenport) Brown, the widow of wholesale druggist Atherton Thayer Brown.  She previously had lived at 401 Commonwealth.

By the 1917-1918 winter season, 480 Beacon was the home of leather and wool merchant Morris Rosenthal and his wife, Louise (Rothschild) Rosenthal.  They previously had lived in Brookline.

During the 1922-1923 winter season, they were traveling abroad and 480 Beacon was the home of Felix Vorenberg and his wife, Rose (Frankenstein) Vorenberg.  They previously had lived at the Copley Plaza Hotel.  He was a dealer in chinaware and jewelry.  By the 1923=1924 season, the Vorenbergs were living at the Copley Plaza Hotel again, and the Rosenthals had resumed living at 480 Beacon.

During the 1924-1925 season the Rosenthals were living at the Copley Plaza Hotel and 480 Beacon was the home of Abraham C. (“Cap”) Ratshesky and his wife, Edith (Shuman) Ratshesky.  They previously had lived at the Hotel Touraine.

Abraham Ratshesky and his brother, Israel, had been wholesale clothiers in the firm founded by their father, Asher Ratshesky.  In 1895, they became bankers, founding the United States Trust Company, which specialized in the needs of the immigrant population, providing services not otherwise available to them in Boston.

The Rosenthals resumed living at 480 Beacon and continued to live there until about 1932, after which they made their home in Beverly.

The house was not listed in the 1933 Blue Book and was shown as vacant in the 1933 City Directory.

By 1934, Edward and Alison Hill once again were living at 480 Beacon, joined by their sons, Henry B. Hill and George E. B. Hill.  They had been living in Cambridge, which had been their home since about 1919, when they moved from 4 Marlborough. They continued to live at 480 Beacon until about 1937.

By 1939, 480 Beacon was the home of Ann Allen and the location of her Allen School of Costume Designing.  She previously had lived at 127 Newbury and the school had been located at 29 Newbury.  She continued to live and operate her school at 480 Beacon until about 1941.

On July 16, 1941, 480 Beacon was acquired from Elizabeth Keegan by Miss Alma Andrea Vorland.

By 1942, 480 Beacon was the location of the Kingsley School, a school for children of normal intelligence with reading difficulties or other learning problems.  The school had been founded in 1938 by Edith (Halliday) Kingsley and Helen Loud.  Edith Kingsley was an educator and expert in remedial reading; her husband, Howard L. Kingsley was a professor of psychology at Boston University.

By the mid-1940s, the property had been converted into apartments.

The property changed hands and on May 29, 1953, was acquired by Hans Ulrich Steinhart and his wife, Margarethe (Koschel) Steinhart. They lived in one of the apartments. He was a librarian and she was a Christian Science practitioner. They previously had lived at 222 Huntington.

In April of 1954, Hans Steinhart filed for (and subsequently received) permission to legalize the occupancy as six apartments, which he indicated was the existing condition when he purchased the property.

The Steinharts continued to live at 480 Beacon in 1955, but moved thereafter to Glassboro, New Jersey, where he became an assistant professor of library science at the State Teachers College.

On July 1, 1960, 480 Beacon was purchased from James C. Wilson, Jr., by the Massachusetts Iota-Tau Association. It already was the owner of 484 Beacon, where the MIT chapter of Sigma Alpha Epsilon fraternity had been located since 1921.

In June of 1961, it filed for (and subsequently received) permission to convert the property from six apartments into a second fraternity house for the Sigma Alpha Epsilon fraternity.

In October of 1999, the Boston Licensing Board revoked the fraternity’s dormitory licenses because of illegal consumption of alcohol by minors and repeated complaints by neighbors.

On February 5, 2001, the Iota-Tau Association transferred the property to The 484 Phi Alpha Foundation.

On March 26, 2001, 480 Beacon was purchased from The 484 Phi Alpha Foundation by Mark E. Harrington and his wife, Patricia Harrington.

On April 16, 2003, the Harringtons converted the property into two condominium units, the Beacon Riverview Condominium. 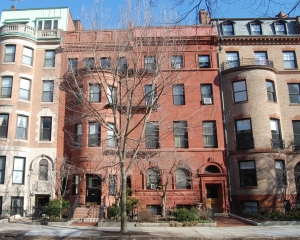