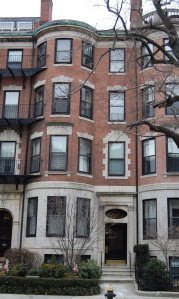 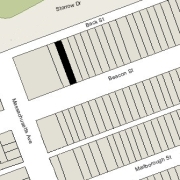 486 Beacon is located on the north side of Beacon, between Hereford and Massachusetts Avenue, with 484 Beacon to the east and 488 Beacon to the west.

Click here for an index to the deeds for 486 Beacon, and click here for further information on the land on the north side of Beacon, including the Storrow Memorial Embankment on the Esplanade.

Rollin H. Allen and Henry W. Savage were associated in a number of real estate ventures. Among their investments was the Castle Square Theatre on Tremont, and they jointly owned the Castle Square Opera Company (Rollin H. Allen acquired Henry W. Savage’s interest in 1895). Rollin Allen and his wife lived at 179 Newbury and later at 240 Commonwealth.

Henry M. Whitney was president of the Metropolitan Steamship Company and the founder or organizer of several coal mining, steel, and illuminating gas companies. In 1886, he had organized the West End Land Company, which developed large portions of Brookline along Beacon Street, and the West End Street Railway Company, which later pioneered the electric trolley system in Boston. He and his wife, Margaret Foster (Green) Whitney, lived in Brookline. 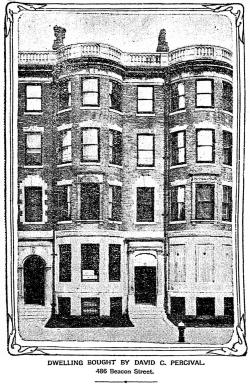 On October 3, 1893, 486 Beacon was purchased from Henry Whitney by Margaret (Darlington) Bennett, the wife of stockbroker Stephen Howe Bennett. They had married in June of 1893 and 486 Beacon probably was their first home together. They continued to live there during the 1903-1904 winter season, but moved thereafter to 329 Commonwealth.

On September 1, 1904, 486 Commonwealth was purchased from Margaret Bennett by wholesale jeweler David Crowell Percival, Jr. He and his wife, Jennie F. (Bessie) Percival, made it their home. They previously had lived at 217 Newbury. They also maintained a home, Graycourt, on Marblehead Neck.

Living with them were their son, Lawrence French Percival, and their son-in-law and daughter, Herman Parker and Lillian H. (Percival) Parker.  Lawrence Percival was a jeweler in his father’s firm. Herman Parker had been an architect until about 1895 when he joined Macullar, Parker & Co., the retail clothing firm founded by his father, Charles Wallingford Parker.  Lawrence Percival and the Parkers had lived with the Percivals at 217 Newbury. The Percivals’ other son, David Crowell Percival, III, was treasurer of his father‘s wholesale jewelry firm; he and his wife, Harriette E. (Williamson) Percival, lived at 636 Beacon and then at 306 Commonwealth.

Lawrence Percival married in April of 1906 to Evelyn Harris Joyce of Philadelphia. After their marriage, they lived at 486 Beacon with his parents and the Parkers.

On November 28, 1906, 486 Beacon was purchased from David Percival by William Morgan Butler. He was a widower, his wife Minne Ford (Norton) Butler, having died in February of 1905. They had lived at the Hotel Touraine (southeast corner of Boylston and Tremont).

He married again in January of 1907 to Mary Lothrop Webster, and 486 Beacon became their home. They also maintained a home in Edgartown on Martha’s Vineyard.

William Morgan Butler was a lawyer and former state legislator.  He retired from legal practice in 1912 and became a cotton manufacturer.  In 1924, he served as Chairman of the Republican National Committee, and in November of that year, was appointed to the US Senate to fill the vacancy left by the death of Henry Cabot Lodge.  He lost his bid for election to the office in 1926, and lost a second attempt for election to the US Senate in 1930. 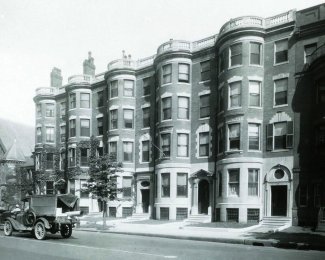 On April 20, 1921, 486 Beacon was purchased from William Butler by Annie E. (Jacobs) Bullard, the wife of Washington Irving Bullard. They previously had lived in Chestnut Hill. They also maintained a home in Edgartown.

W. Irving Bullard was a former reporter and editor.  He subsequently was a bond broker, textile manufacturer, and banker.

During the 1925-1926 winter season, the Bullards were living elsewhere and 486 Beacon was the home of cotton broker and mill owner Thomas Spriggs Blumer and his wife, Nancy Warburton (Scott) Blumer.  They previously had lived at 341 Beacon.  The also maintained a home in Manchester.  By 1927, they were living at 127 Beacon.

The Bullards were abroad for the 1927-1928 winter season, and after they returned they lived at the Hotel Somerset.

During the 1927-1928 season, 486 Beacon was the home Robert Shuman Steinert and his wife, Lucy Pettingill (Currier) Steinert; during the same season, they also lived with Lucy Steinert’s parents, Guy and Marie (Burress) Currier, at 8 Commonwealth. They had lived at 401 Commonwealth with Robert Steinert’s widowed father, Alexander Steinert, during the previous season. They also maintained a home in Beverly Farms. Robert Steinert was president of M. Steinert & Sons, piano and music dealers, on Boylston, and of the Jewett Piano Company, manufacturers of pianos.  By the 1928-1929 winter season, they had moved to 13 Gloucester.

486 Beacon and 488 Beacon remained under the same ownership from this point.

486-488 Beacon were operated as lodging houses by Charles Henry Bingham and his wife, Elizabeth (Mead) Bingham, who lived at 488 Beacon.

In October of 1944, Edward Graham filed to legalize the occupancy of both properties as lodging houses, noting that they had been used as such “for more than fifteen years.”  He subsequently abandoned the application.

In September of 1946, he filed for (and subsequently received) permission to convert the properties from lodging houses into fraternities for use by the MIT chapter of the Tau Epsilon Phi fraternity.  Doors were cut on the fifth floor between 486 and 488 Beacon, and also on the second floor between 486 and 484 Beacon (location of the MIT chapter of the Sigma Alpha Epsilon fraternity).  Tau Epsilon Phi remained at 486-488 Beacon until 1958, when it purchased and moved to 253 Commonwealth.

On September 26, 1959, 486-488 Beacon were acquired from Edward T. P. Graham by George Irwin Rohrbough, president of the Chandler School for Women, located at 448 Beacon. He and his wife, Martha Fraser (Waugh) Rohrbough, lived in Cambridge.

The Wesley Foundation was formed to provide spiritual and social services to Methodist students at Harvard, Radcliffe, MIT, Wellesley, and Lesley College.

In July of 1967, it applied for (and subsequently received) permission to convert the properties from a fraternity back into a lodging house.

On March 14, 1973, 486-488 Beacon were acquired from The Wesley Foundation in Cambridge by Kenneth L. Shaw. On the same day, he transferred the property to Anthony P. Baker.

On August 31, 1976, Karnig S. Dinjian and Nubar J. Dinjian foreclosed on a mortgage they held on 486-488 Beacon and transferred the property to themselves as trustees of the Two-D Realty Trust.

On December 29, 1977, they transferred the properties to Malcolm McPhail and Dominick Scarfo as trustees of the Dinjian & Dinjian Realty Trust.

In May of 1992, a condominium owner at 486 Beacon, applied for (and subsequently received) permission to combine two units and reduce the occupancy from nine to eight units.