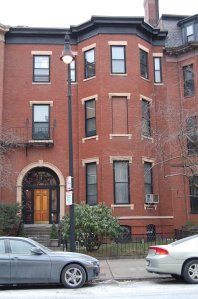 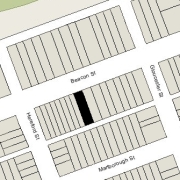 417 Beacon is located on the south side of Beacon, between Gloucester and Hereford, with 415 Beacon to the east and 419 Beacon to the west.

The land on which 413-415-417 Beacon were built was part of a larger parcel purchased from the Boston Water Power Company on February 20, 1863, by banker and broker Robert Marion Pratt. He was unmarried and lived at 13 Louisburg Square with his parents, George Williams Pratt (one of the founders of the Boston Stock Exchange) and Mary Barrow (White) Pratt. The Pratts also maintained a home, Oakley, on Belmont Avenue in Watertown (it became the Oakley Country Club in 1898).

Click here for an index to the deeds for 417 Beacon, and click here for further information about the land between the south side of Beacon and Alley 415, from Gloucester to Hereford.

Henry Wainwright died in May of 1868, and on August 28, 1868, the Wainwrights recorded two deeds. The first, dated May 24, 1866, transferred 417 Beacon from Rebecca Wainwright as an individual to her as trustee for the benefit of her father. It indicated that the purchase of 417 Beacon had been made from his funds and had been put in her name “for greater convenience in making arrangements for building upon said land and for selling the same if found expedient.” The second deed transferred the property from Rebecca Wainwright, as trustee for her father, to William Chapman Wainwright and William Sohier Dexter as trustees under his will. William Sohier Dexter was Sarah (Dexter) Wainwright’s first cousin (her father, Charles Parker Dexter, was the brother of William Sohier Dexter’s father, George Minot Dexter).

On May 22, 1874, 417 Beacon was acquired from Henry Wainwright’s estate by James Jackson Storrow. He and his wife, Anne Amory (Dexter) Storrow, made it their home. They had married in September of 1873 and previously had lived in the Longwood district of Brookline. Anne (Dexter) Storrow was the sister of William Sohier Dexter.

James Storrow was an attorney and chief counsel to the Bell Telephone Company.

Samuel Storrow was a civil engineer.  In June of 1890, he joined the Union Pacific Railroad and moved to the Washington State.

James Storrow, Sr., died in April of 1897 and Anne Storrow died in November of 1899. 417 Beacon was inherited by Elizabeth, James, and Samuel Storrow.

In April and May of 1900, Samuel Storrow and Elizabeth Storrow transferred their interests in 413 Beacon to their brother, James.

James Storrow was a practicing attorney until 1900, when he became an investment banker with the firm of Lee, Higginson & Company.  He was a leader in the Good Government Association and in efforts to create the Charles River Embankment.

In October of 1915, he applied for (and subsequently received) permission to rebuild the front steps, entrance, and vestibule of 417 Beacon, extending the stairs into the front walkway and, thereby, expanding the size of the vestibule.  The remodeling was designed by architects Bigelow and Wadsworth.

James and Helen Storrow’s son, James Jackson Storrow, III, an electrical engineer, lived with them until his marriage in June of 1916 to Margaret Randolph Rotch.  After their marriage, they lived at 265 Clarendon.

James Storrow, Jr., died in March of 1926. Helen Storrow continued to live at 417 Beacon until about 1935.  She also continued to maintain a home in Lincoln.

On April 14, 1939, 417 Beacon was acquired from Helen Storrow by Marc Peter, Jr. He and his wife, Frances (Gardiner) Peter, made it their home. His parents, Marc Peter and Jeanne Marie Antoinette (Lachenal) Peter, lived with them.

Marc Peter, Sr., served as Swiss Minister to the United States from 1920 to 1939. Jeanne (Lachenal) Peter was the daughter of Adrien Lachenal, who was President of Switzerland in 1903 and 1904. Marc Peter, Jr., was an architect in partnership with Hugh Stubbins.

In July of 1939, Marc Peter applied for (and subsequently received) permission to remodel the interior of 417 Beacon. Although not indicated on the permit, it appears the work divided the house into two apartments, one for Marc and Jeanne Peter and the other for Marc and Frances Peter.

On January 29, 1940, Marc Peter, Jr., transferred his remaining interest in the property to his mother.

By 1946, the apartment formerly occupied by Marc and Frances Peter had become the home of Louis Blalock McCarthy and his wife, Gertrude (Banks) McCarthy. They previously had lived in Brookline. He was vice-president and treasurer of The Macallan Company, manufacturers of electrical insulation. They continued to live there until about 1949.

By 1949, the apartment formerly occupied by Marc and Jeanne Peter was the home of Harold F. Lang, an investment broker, and his wife, Marie Louise (Morland) Lang. They previously had lived in an apartment at 113 Commonwealth. They continued to live at 417 Beacon until about 1951.

From about 1950, the apartment formerly occupied by the McCarthys was the home of William E. Ehrlich and his wife, Evelyn R. (Seltzer) Ehrlich. They previously had lived in Brookline. He was president of Touraine Stores, a women’s specialty chain, and of the David P. Ehrlich Company, dealers in pipes and tobacco, and served as chairman of the American Jewish Committee during the early 1950s. Evelyn Ehrlich was an expert in identifying forged documents through the analysis of imprints and typography. In 1952, while a resident of 417 Beacon, she examined documents in the Alger Hiss spy case and found that they were not, in fact, produced on t the typewriter alleged to have been used by Hiss. The Ehrlichs continued to live at 417 Beacon until about 1954.

From about 1951, the apartment formerly occupied by the Langs was the home of Joseph Rochemont Hamlen and his wife, Martha (Thorndike) Hamlen. They previously had lived in Brookline. He was an advertising executive and she was president of the Dartmouth Bookstall, located at 284 Dartmouth.

On January 28, 1955, 417 Beacon was purchased from Jeanne Peter (a resident of New York City) by Constance Cutler (Templeton) Rhinelander, the former wife of Frederic William Rhinelander. She previously had lived at 120 Marlborough.

Constance Rhinelander lived in the apartment formerly occupied by the Ehrlichs and the Hamlens continued to live in the second apartment. He died in January of 1957.

In October of 1961, Constance Rhinelander applied for (and subsequently received) permission to convert the property from a two-family dwelling into three apartments.

On September 4, 1979, Constance Rhinelander converted the property into three condominium units: the 417 Beacon Street Condominium. She sold two of the units and continued to live in the third until her death in April of 1986.