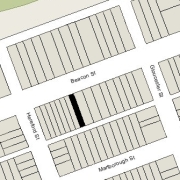 419 Beacon is located on the south side of Beacon, between Gloucester and Hereford, with 417 Beacon to the east and 421 Beacon to the west.

Click here for an index to the deeds for 419 Beacon, and click here for further information about the land between the south side of Beacon and Alley 415, from Gloucester to Hereford.

George Martin Gibson was a builder and contractor, and built the houses at 419-425 Beacon (in the 1869 deed by which he sold 423 Beacon, he refers to it as “the third lot and house from the eastern end of the block now in process of erection by me”). It appears likely that he also built the houses at 427-433 Beacon under contract to the Sawyers and Robert Pratt. George Gibson and his wife, Frances Rebecca (Esten) Gibson lived at 72 Pinckney and later in Brookline.

On June 5, 1869, 419 Beacon was purchased from George Gibson by Joshua Gardner Beals. He and his wife Edith (Simmons) Beals, made it their home. They previously had lived at 8 Pemberton Square

Joshua Beals was an owner of the Boston Post newspaper, founded by his father, William Beals, and Charles G. Greene.

In 1875 Joshua Beals sold his interest in the Boston Post and in about 1877, the Beals moved to New York City.  They continued to own 419 Beacon and lease it to others.

During the 1886-1887 winter season, 419 Beacon was the home of (Phebe) Arabella Perry (Norris) Brewster, the widow of John Brewster, who had died in January of 1886.  He had been a banker, the senior partner in the firm with which Arthur Estabrook also had been affiliated.  Prior to his death, John and Arabella Brewster had lived in Cambridge.

In April of 1887, Arabella Brewster married again, to Elihu Burritt Palmer. He was a boot and shoe dealer and also served as Major General of the Patriarchs Militant, a unit of the Independent Order of Odd Fellows. They continued to live at 419 Beacon during the 1887-1888 winter season, but moved thereafter to 2161 Washington, next to his boot and shoe business.

On November 19, 1888, 419 Beacon was acquired from Joshua G. Beals by James Jackson Storrow, an attorney and chief counsel to the Bell Telephone Company.  He and his wife, Anne Amory (Dexter) Storrow, lived  at 417 Beacon.

By the 1888-1889 winter season, 419 Beacon was the home of William Bradshaw Byrnes, a dry goods commission merchant, and his wife Fanny Rebekah (Keeler) Byrnes.  They previously had lived at 20 Newbury.  They continued to live at 419 Beacon during the 1890-1891 season, after which they moved to 30 Millmont.

James J. Storrow, Jr., was an attorney.  In 1900, he became an investment banker with the firm of Lee, Higginson & Company.  He later would become a leader in the Good Government Association and in efforts to create the Charles River Embankment.

James and Helen Storrow continued to live at 419 Beacon during the 1899-1900 winter season.  His father had died in April of 1897 and his step-mother had continued to live at 417 Beacon until her death in November of 1899.  The house was inherited by James Storrow, Jr., and his two siblings, Elizabeth R. Storrow and Samuel Storrow.  In April and May of 1900, James Storrow, Jr., acquired their interests, and he and his wife moved from 419 Beacon to 417 Beacon.

On June 7, 1900, 419 Beacon was purchased from his father’s estate by Elizabeth S. (Poole) Winch, the wife of William Johnson Winch, a singer and vocal music teacher. They previously had lived at 78 Mt. Vernon. Their son, William Porter Winch, an attorney, lived with them. They also maintained a home in Windsor, Vermont.

They continued to live at 419 Beacon until during the 1907-1908 winter season, but moved thereafter, probably to Windsor. Elizabeth Winch continued to own 419 Beacon and lease it to others.

During the 1908-1909 winter season, 419 Beacon was the home of rubber shoe manufacturer Harry Elisha Converse and his wife Mary Caroline (Parker) Converse.  They also maintained a home in Marion.  By 1910, they had moved to 256 Beacon.

By the 1914-1915 winter season, 419 Beacon was the home of Dr. John Baker Swift, Jr., and his wife, Anna Greenleaf (Winsor) Swift.  He was a physician and also maintained his medical office at 419 Beacon.  They previously had lived in an apartment at 421 Marlborough.  Before their marriage in June of 1912, John Swift lived at 465 Beacon with his parents, John Baker Swift and Hettie (Potter) Swift, and maintained his medical offices there with his father. 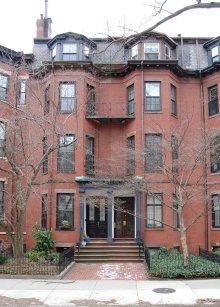 The Swifts continued to live at 419 Beacon during the 1917-1918 winter season, but moved thereafter to Brookline.

William Johnson Winch died in February of 1920, and on May 10, 1920, 419 Beacon was acquired from Elizabeth Winch by Charles Henry Sherburne. He and his wife, Josephine May (Woods) Sherburne, made it their home. They previously had lived at 513 Beacon. They also maintained a home at Marblehead.

Charles Sherburne was a manufacturer of luggage tags, locks, and other railroad supplies and brass products.

On May 30, 1922, Charles Sherburne transferred 419 Beacon into Josephine Sherburne’s name.

Josephine Sherburne died in 1935 and 419 Beacon was inherited by the Sherburnes’ daughters, Sarah S. (Sherburne) Putnam, the wife of George Putnam, and Charlotte Sherburne.  On November 4, 1935, they transferred the property to their father.

Charles Sherburne continued to live at 419 Beacon.  In about 1937, he changed his summer home from Marblehead to Ipswich.

He continued to live at 419 Beacon until his death in September of 1943.

On April 5, 1944, 419 Beacon was purchased from the estate of Charles Sherburne by Cyrene James Smith and his wife, Harriett Mary (Vossahlik) Smith.  They lived in Revere, where He was a supervisor of the city electrical department.

419 Beacon became the home of several of the Smiths’ unmarried children: Donald Smith, a photographer, Julia “Rennie” Smith, a stenographer, and Harriett Marie Smith, a lawyer and associate legal editor for the publication Banker and Tradesman.  They previously had been lodgers at 426 Beacon and, before that, had lived in Revere with their parents.

On April 13, 1946, 419 Beacon was purchased from the Smiths by Carolyn (Lasher) Russell, the wife of John Joseph Russell, who was serving in the US Marine Corps.  They lived there in 1946, joined by his unmarried aunt, Agnes Catherine Russell.  By 1948, John and Carolyn Russell were living in Jacksonville, North Carolina

On January 14, 1947, 419 Beacon was acquired from Carolyn Russell by Mary Elizabeth (called Elizabeth) (Collins) Leddy, the wife of Joseph Hinton Leddy.  They previously had lived in an apartment at 471 Beacon.  An attorney, he was treasurer and principal of Winslow Secretarial School.  They continued to live there until about 1955, when they moved to Arlington.

On April 1, 1955, 419 Beacon was acquired from Elizabeth Leddy by Leonard Edward Sabens. He and his wife, Pearl A. (Henning) Sabens, lived in Reading. 419 Beacon became the home of their son-in-law and daughter, Frederick Doten Hawkins and Lillian Eileen (Sabens) Hawkins. They previously had lived in Weston.

Leonard Sabens died in March of 1958 and Pearl Sabens moved to 419 Beacon to live with the Hawkinses.

Frederick and Lillian Hawkins and Pearl Sabens continued to live at 419 Beacon until about 1961, when they moved to an apartment at 374 Marlborough.

On September 20, 1960, the North Quincy Cooperative Bank foreclosed on its mortgage to Joseph and Sylvia Butera, and sold 419 Beacon to Justin W. Griess and his wife, Katherine (Haskell) Sears Griess. They also owned 421 Beacon, where they lived.

Justin Griess was founder and owner of Yankee Maid Products, a household design and outfitting firm on Newbury Street.  After he retired, he purchased and remodeled houses in the Back Bay and Beacon Hill.  He also was a prominent breeder of poodles.

419 Beacon appears to have been converted into two units at about this time.

On July 13, 1961, 419 Beacon was acquired from Justin and Katherine Griess by Mrs. Marion (Nelson) Luethi, the former wife of Ralph Whitefield Luethi.  She was an interior decorator.  Mrs. Luethi lived in one of the units until the late 1970s.  The second unit was occupied by various residents.

On August 6, 2000, John C. Cronin and his wife, Cheryl M. Cronin, purchased 419 Beacon from M. Flint and Judy Beal.  The Cronins converted the property from a two-family dwelling into a single-family dwelling.

419 Beacon remained assessed as a single-family dwelling in 2020.