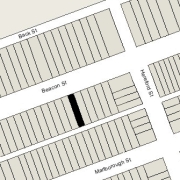 451 Beacon is located on the south side of Beacon, between Hereford and Massachusetts Avenue, with 449 Beacon to the east and 453 Beacon to the west.

451 Beacon was designed by Sturgis and Brigham, architects, and built by Weston & Shepard, masons, in 1882-1883 as the home of Anne (Lodge) Dorr, the widow of Alfred Dorr, and her unmarried son, Clarence Alfred Dorr. Clarence A. Dorr is shown as the owner on the original building permit application, dated February 10, 1882.

Clarence Dorr purchased the land for 451 Beacon on August 25, 1882, from John Hubbard Sturgis of Sturgis and Brigham, probably after construction of the house had begun, and transferred it to his mother on the same day.

The lot was part of a parcel John H. Sturgis had assembled through three purchases in January and February of 1880, comprising all of the land on the south side of Beacon from a line 198 feet west of Hereford to Massachusetts Avenue, with a frontage of 442 feet. The parcel originally had been intersected by Parker Street, a 60 foot wide street located on top of the Cross Dam, which ran southwest from Beacon Street at approximately a 45 degree angle, starting about 210 feet west of Hereford on the south side of Beacon.

The land east of Parker Street had been purchased from the Boston Water Power Company on June 20, 1866, by Daniel Davies, a housewright and carpenter, and the land to the west had been purchased from the company on March 1, 1872, by a real estate investment trust (known as the Beacon Street Lands Trust) formed by Grenville T. W. Braman (Daniel Davies’s son-in-law), Henry D. Hyde, and Frank W. Andrews. Parker Street between Beacon and Boylston was discontinued as a public thoroughfare in 1877, and  Daniel Davies and Grenville T. W. Braman joined with the Beacon Street Lands Trust to acquire the roadway between Beacon and Commonwealth and the land beneath it. Daniel Davies died in June of 1878, and on February 1, 1879, his heirs and Grenville Braman and his partners entered into a series of transactions to “square off” their holdings by exchanging triangular shaped lots, resulting in a north-south dividing line 265 feet west of Hereford.

451 Beacon was built partially on land that previously had been Parker Street.

Click here for an index to the deeds for 451 Beacon, and click here for further information on the land on the south side of Beacon between Hereford and Massachusetts Avenue.

By the 1883-1884 winter season, Anne Dorr and Clarence Dorr had made 451 Beacon their home. They previously had lived next door, at 449 Beacon. He was a stock and note broker.

During the 1892-1893 winter season, they were joined at 451 Beacon by Anne Dorr’s granddaughter, Lilian G. Hayden, the daughter of William Hayden and Louisa Anne (Dorr) Hayden.  Her usual residence was in Washington DC.

Clarence Dorr died in December of 1895 and Anne Dorr died in May of 1897. In her will, she left 451 Beacon to her son, Ellerton Lodge Dorr, a cotton broker. He and his wife, Mary Louisa (Stanwood) Dorr, lived at The Tudor (northwest corner of Beacon and Joy) and later at 45 Commonwealth. He leased 451 Beacon to others.

The house was not listed in the 1898 Boston Blue Book.

In April of 1898, 451 Beacon became the home of Robert Bruce Fairbairn, president of the National Rockland Bank, and his wife, Edith B. (Alexander) Fairbairn.  They previously had lived in Roxbury.

He died in March of 1907. Edith Fairbairn continued to live at 451 Beacon and on April 2, 1910, she purchased the house from Ellerton Dorr.

In October of 1911, Edith Fairbairn married again, to Captain (later Colonel) Cecil Stewart, an artist and former drawing instructor at West Point.  In 1910, he had lived in a hotel in San Francisco.  After their marriage, they lived at 451 Beacon.

Edith Stewart died in May of 1921. Cecil Stewart continued to live at 451 Beacon and in 1924 married again, to Helene C. Bolze, a nurse about 35 years his junior who, according to the June 5, 1924, Boston Globe article on the engagement, had been “attending him for some time at his home.”

On April 30, 1928, 451 Beacon was acquired from Cecil Stewart by Lillian DeWolfe (Pingree) Broughton, the wife of Dr. Arthur Nicholson Broughton, a physician. They previously had lived in Jamaica Plain. They also maintained a home at Bass Rocks in Gloucester.

Arthur Broughton died in December of 1932.  Lillian Broughton and their adopted daughter, Frances, continued to live there until about 1938.  By 1940, they were living at 81 Pinckney.

On May 14, 1938, Lillian Broughton transferred 451 Beacon to the Institution for Savings in Roxbury and Its Vicinity, which held a mortgage on the property.

On August 24, 1938, 451 Beacon was acquired by Dr. Henry C. Turner and his wife, Alberta (Roosa) Turner.  They previously had lived at 155 Massachusetts Avenue.  Henry Turner was a urologist; he maintained his medical office at 451 Beacon and also was head of the Urological Outpatient Department of Boston City Hospital.  Alberta Turner was a graduate of Portia Law School and a real estate broker.

In September of 1938, Dr. Turner applied for (and subsequently received) permission to remodel the interior.  He indicated that the current and proposed use was as a single-family dwelling and doctor’s office.

On June 30, 1972, 451 Beacon was purchased from Alberta Turner by John D. Peters and his wife, Mary E. Peters. It appears that they converted the property into a multiple dwelling, inasmuch as it was assessed as a four-to-six family dwelling by 1984, and probably before.

On January 17, 2001, John and Mary Peters transferred the property to themselves as co-trustees of the Peters Family Realty Trust.

On January 30, 2013, 451 Beacon was purchased from Peterses by the LDJ Development LLC (Robert Weintraub, manager).

It remained an apartment house, assessed as a four- to six-family dwelling, in 2020.