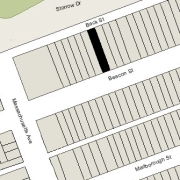 476 Beacon is located on the north side of Beacon, between Hereford and Massachusetts Avenue, with 474 Beacon to the east and 478 Beacon to the west.

476 Beacon was designed by Fehmer and Page, architects, and built in 1891-1892 by Thomas J. Lyons, mason, as the home of retired merchant Edward Frothingham and his wife, Eugenia (Mifflin) Frothingham. He is shown as the owner on the original building permit application, dated November 2, 1891, and on the final building inspection report, dated December 3, 1892.

Eugenia Frothingham purchased the land for 476 Beacon on October 16, 1891, from building contractor George Wheatland, Jr., who had purchased it on that same day from the Boston and Roxbury Mill Corporation. 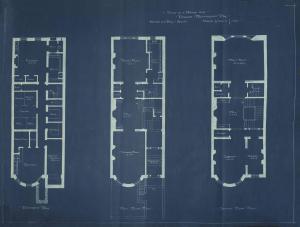 By the 1892-1893 winter season, Edward Frothingham and Eugenia (Mifflin) Frothingham had made 476 Beacon their home. Their three children – Eugenia Brooks Frothingham, Olga Frothingham, and Charles Mifflin Frothingham – lived with them. They previously had lived at 210 Beacon with his nephew, Gorham Hubbard, and his wife, Sarah (Henshaw) Hubbard.

By 1895, the Frothinghams had been joined at 476 Beacon by Mary May (Bradlee) Gaillard, the widow of General Louis Dieudonné Gaillard.  He was a career French military officer and diplomat who had died in January of 1888. They previously had lived at the Villa Bogdane in Pau, France. According to her Boston Globe obituary, before their marriages, Mary Bradlee and Eugenia Mifflin had traveled to France together, where Mary Bradlee met Louis Gaillard, a young widower. They had married in May of 1868. Mary (Bradlee) Gaillard’s sister, Katharine May Bradlee, married Eugenia Mifflin’s maternal first cousin, Benjamin Williams Crowninshield of 164 Marlborough and Marblehead.

In 1899, the Frothingams built a home, Monadnock Hall, in Dublin, New Hampshire.

Edward Frothingham died in December of 1906. Eugenia Frothingham and her unmarried children, Eugenia and Charles, continued to live at 476 Beacon.

Charles Frothingham moved to the Hemenway Chambers at 91 Westland Avenue in about 1909. He was president of the Trojan Cracker Company. He married in August of 1913 to Lillian F. Sault. They subsequently moved to Wayland where he owned and operated a farm.

On April 2, 1914, Eugenia (Mifflin) Frothingham transferred 476 Beacon to Eugenia Brooks Frothingham. She was an author and active suffragette.

Eugenia (Mifflin) Frothingham died in August of 1919, and by the 1919-1920 winter season, Eugenia Brooks Frothingham had been joined at 476 Beacon by Langdon and Olga Frothingham. They previously had lived at 336 Bay State Road.

Eugenia Brooks Frothingham continued to live at 476 Beacon during the 1921-1922 winter season, but moved thereafter to 353 Beacon.

On October 10, 1922, 474 Beacon was acquired from Eugenia Brooks Frothingham by her brother, Charles, and sister, Olga, and on April 9, 1923, Olga Frothingam acquired her brother’s one-half interest in the property.

Langdon and Olga Frothingham continued to live at 476 Beacon. They also maintained a home in Pocasset.

Langdon Frothingham died in July of 1935. Olga Frothingham continued to live at 476 Beacon until about 1937, when she moved once again to The Charlesgate at 535 Beacon.

On May 5, 1937, 476 Beacon was purchased from Olga Frothingham by James Michael Dunbar, Jr., a plumber. He and his wife, Helen R. (O’Brien) Dunbar, lived in West Roxbury. In May of 1937, he applied for (and subsequently received) permission to convert 476 Beacon from a single-family dwelling into twelve apartments.

On December 26, 1984, Lenk Properties transferred 476 Beacon to Richard Lenk as part of the liquidation of the company. Richard Lenk died in March of 1994.

On December 28, 2012, 476 Beacon was acquired from the Richard Van S. Lenk Trust by the 476 Beacon Street LLC (James Keliher, manager of record.

In February of 2013, the 476 Beacon Street LLC applied for (and subsequently received) permission to convert 476 Beacon into four units and construct a garage at the rear of the property.