Click here for an index to the deeds for 20 Hereford, and click here for further information about the land between the north side of Marlborough and Alley 415, from Gloucester to Hereford.

On January 18, 1872, 20 Hereford was purchased from Frances Gibson by Elizabeth Putnam (Proctor) Wetherill, the wife of William Henry Wetherill, a dealer in hides and sheep skins in partnership with Charles H. Morey. They lived in Peabody and may have resided briefly at 20 Hereford. He was a native of Philadelphia and, by 1873, they had moved there, where he became a manufacturer of white lead.

On June 4, 1872, 20 Hereford was purchased from Elizabeth Wetherill by Emma F. (Adams) West, the wife of William West. They had married in October of 1871.

On September 13, 1876, 20 Hereford was purchased from Emma West by William Minot and William Minot, Jr., as trustees of a trust established for the benefit of Frances Elizabeth Appleton in June of 1876, at the time of her marriage to Charles Cabot Jackson. 20 Hereford became Charles and Frances (Appleton) Jackson’s home. He was a stockbroker. Prior to their marriage, Charles Jackson had lived at 88 Marlborough with his mother, Susan Cabot (Jackson) Jackson, the widow of Charles Jackson, Jr., and Frances Elizabeth Appleton had lived in Brookline with her step-father and step-mother, George Upham and Mary Louisa (McCulloh) Mayer Upham (Frances Appleton’s father, Robert Appleton, had died in April of 1851 and her mother, Rebecca Wentworth (Means) Appleton, had married again in November of 1854 to George Upham; Rebecca (Means) Appleton Upham died in June of 1859 and George Upham remarried to Mary (McCulloh) Mayer, the widow of Henry Christian Mayer).

The Jacksons continued to live at 20 Hereford during the 1883-1884 winter season, but moved thereafter to 181 Commonwealth.

On July 29, 1884, 20 Hereford was purchased from Frances Jackson’s trust by Susan Mason (Lawrence) Loring, the wife of William Caleb Loring. They previously had lived at 267 Clarendon.

William Caleb Loring was an attorney and in 1899 would become a justice of the Massachusetts Supreme Judicial Court.

They continued to live at 20 Hereford during the 1893-1894 winter season, after which they moved to a new home they had built at 404 Beacon (2 Gloucester).

On August 21, 1894, 20 Hereford was purchased from Susan Loring by Helen Fisher (Bradford) Howe of Philadelphia, the widow of James Henry Howe. She was living in Europe and leased the house to others.

By the 1894-1895 winter season, it was the home of commission merchant Edward Jackson, his sister, Ellen Jackson, and their niece, Miss Lucy Ellery Russel, daughter of William C. Russel and Sarah Cabot (Jackson) Russel.  They previously had lived in an apartment at the Hotel Agassiz at 191 Commonwealth.

They continued to live at 20 Hereford during the 1896-1897 winter season, but moved back to the Hotel Agassiz soon thereafter.

During the 1897-1898 winter season, 20 Hereford was the home of Joseph Lee and his wife, Margaret Copley (Cabot) Lee.  They had married in June of 1897, and 20 Hereford probably was their first home together.

Joseph Lee was an attorney and would later become a leader of the Metropolitan Civic League, advocates for social and municipal reform.

On November 8, 1899, Helen Howe transferred the property to herself as guardian for her minor son, George Howe.

By the 1899-1900 winter season, 20 Hereford was the home of Dr. Langdon Frothingham, a veterinarian, his brother, Louis Adams Frothingham, an attorney and future Lt. Governor of Massachusetts, and their sister, Anne Gorham Frothingham.  They previously had lived at 29 Gloucester.

Langdon Frothingham in December of 1901 to Olga Frothingham, his first cousin, and they moved to The Charlesgate at 535 Beacon.  Louis and Anne Frothingham continued to live at 20 Hereford in 1904, but had moved to 92 Bay State Road by 1905.  Anne Frothingham married in June of 1905 to Charles Eliot Guild and Louis Frothingham moved to 24 Marlborough.

Helen Howe and George Howe continued to live at 20 Hereford during the 1906-1907 winter season.

On April 5, 1907, 20 Hereford was purchased from Helen Howe, as George Howe’s guardian, by cotton merchant Francis Williams Sargent. He and his wife, Jane Welles (Hunnewell) Sargent, lived at 40 Hereford. He purchased 20 Hereford to be the home of his daughter, Jane Welles Sargent, and her future husband, Dr. David Cheever. They married in June of 1907.

Helen Howe moved back to The Imperial at 308-310 Commonwealth. George Howe graduated from Harvard in June of 1907, the same month he turned 21, and in July of 1907 he married Marie Jesup Patterson. They subsequently lived in Europe where he studied architecture.

By the 1907-1908 winter season, David and Jane (Sargent) Welles had made 20 Hereford their home, having spent the summer months at her parents home in Wellesley. David Cheever was a surgeon and also maintained his office at 20 Hereford. He previously had lived and maintained his office at 557 Boylston with his parents, Dr. David Williams Cheever and Anna Caroline (Nichols) Cheever.

The Cheevers continued to live at 20 Hereford during the 1918-1919 winter season, but moved thereafter to 193 Marlborough.

In January of 1920, at the time of the 1920 US Census enumeration, 20 Hereford was the home of Ralph Blake Williams, a real estate trustee, and his wife, Susan (Jackson) Williams. They had lived at 398 Marlborough during the 1917-1918 winter season. They also maintained homes in Cohasset and Dover, Massachusetts. They moved from 20 Hereford later in 1920 and by the early 1920s were living at 424 Beacon with his mother, Alice (Weld) Williams, the widow of Thomas Blake Williams.

Caleb Loring was treasurer of the Greenough Coal Company and the Huron Metals Company.

The Lorings continued to live at 20 Hereford during the 1923-1924 winter season, but moved thereafter to Brookline.

During the 1923-1924 winter season, 20 Hereford was the home of banker Arnold Welles Hunnewell and his wife Mary Copley (Amory) Hunnewell.  They previously had lived at 179 Beacon.  They also maintained a home in Wellesley.  By the next season, they were living at 7 Fairfield. 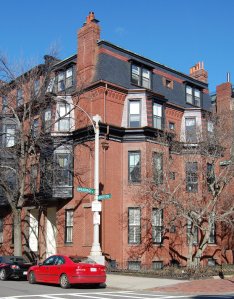 During the 1924-1925 winter season, 20 Hereford was the home of John Babson Thomas and his wife, Marietta (Shea) Reece Thomas.  Living with them were John Reece and Robert Reece, Marietta Thomas’s sons by her previous marriage to John Reece (inventor of the buttonhole sewing machine).  In 1923, they had lived at 34 Gloucester.

On June 29, 1925, 20 Hereford was purchased from the Lorings by Dr. John Hammond Blodgett, a recently-retired ear, nose, and throat specialist.  He was unmarried. He previously had lived in an apartment at 7 Exeter and, before, that at 51 Massachusetts Avenue.

Also living at 20 Hereford was Miss Anna C. Hanson, John Blodgett’s housekeeper.  She also previously had lived at 7 Exeter and at 51 Massachusetts Avenue.

John Blodgett died in February of 1926. In his will, he left 20 Hereford to Anna Hanson.

Anna Hanson continued to live at 20 Hereford until her death in September of 1935.

The house was shown as vacant in the 1936 City Directory.

On November 30, 1936, 20 Hereford was purchased from Anna Hanson’s estate by James Joseph Kelly, a fuel oil company executive. He and his wife, Mary C. (Doyle) Kelley, lived in Medford.

By 1937, 20 Hereford was the home and office of Andreas (Andrew) Forest Christian, a physician and physiotherapist.  He had lived (and maintained his office) at 401 Marlborough in 1936.  He was a widower.

By 1938, he had moved to 469 Beacon, where he lived and operated the Boston School of Physio-Therapy and the Massachusetts Studio for Health.  He continued to live there in 1939.

Also living at 20 Hereford was Miss Matilda Peterson, who had been Dr. Christian’s nurse for many years and had previously lived at 469 Beacon and, before that, at 401 Marlborough. The 1940 US Census indicates that she was Bertram’s Petersen’s wife, which, while possible, is more likely to be an erroneous entry based on the similarity of their names. In all deed records related to 20 Hereford, both Bertram Peterson and Matilda Peterson are shown as unmarried.

Andreas Christian married again In 1941 to Frances Willard Hammond. After their marriage, they lived at 20 Hereford.

Andreas Christian died in September of 1945. Frances Christian and Matilda Peterson continued to live at 20 Hereford in 1946.

In February of 1946, Frances Christian filed for (and subsequently received) permission to convert the property from a single-family dwelling into five apartments. On March 26, 1946, she transferred the property to herself as trustee of the Twenty Hereford Street Trust. By 1947, she had moved to 328 Commonwealth.

On June 13, 1946, 20 Hereford was purchased from Frances Christian by George McEwan, a photo-engraver, and his wife, Ethel Grace (Hartling) McEwan. They lived in Winthrop.

George McEwan died in December of 1948. Ethel McEwan continued to own 20 Hereford and to live in Winthrop.

On July 31, 1959, 20 Hereford was purchased from Ethel McEwan by Donald French Merrill and his wife, Marguerite (Decker) Merrill. They lived in Hanover, Massachusetts.

On April 20, 1967, they transferred the property to Donald F. Merrill as trustee of the Merrill Investment Trust.

On April 30, 1973, 20 Hereford was acquired from Donald Merrill by Betty Bishop.

On November 30, 1973, she converted the property into four condominium units, the 20 Hereford Street Condominium.