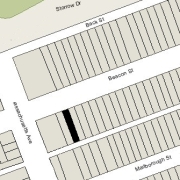 479 Beacon is located on the south side of Beacon, between Hereford and Massachusetts Avenue, with 477 Beacon to the east and 481 Beacon to the west.

479 Beacon was designed by architect Ernest N. Boyden and built in 1891 by John Hurley, mason, for real estate dealer Seth Russell Baker, one of three contiguous four-unit apartment houses (479-481-483 Beacon). 483 Beacon was razed in about 1898 for construction of the Hotel Cambridge. Seth Baker is shown as the owner on the original building permit applications for 479 Beacon and 481 Beacon, both dated March 9, 1891; the application for 483 Beacon has not been located.

Seth Baker bought the land for 479-481-483 Beacon on January 20, 1891, from Frances Anne (Codman) Sturgis, the widow of architect John Hubbard Sturgis. The lot, with a 79 foot frontage, was part of a 375 foot parcel John H. Sturgis purchased on January 24, 1880, from a real estate investment trust formed by Grenville T. W. Braman, Henry D. Hyde, and Frank W. Andrews. The trust had purchased the land from the Boston Water Power Company on March 1, 1872. The 375 foot parcel was one of three John H. Sturgis had purchased in January and February of 1880 comprising all of the land on the south side of Beacon from a line 198 feet west of Hereford to Massachusetts Avenue, with a frontage of 442 feet.

Click here for an index to the deeds for 479 Beacon, and click here for further information on the land on the south side of Beacon between Hereford and Massachusetts Avenue.

As the buildings were nearing completion, they were offered for lease by Henry Wilson Savage, a real estate dealer. On July 30, 1891, he advertised in the Boston Globe: “New Suites to Let – 479, 481, 483 Beacon st., overlooking Charles river and new Harvard bridge, 6 and 7 rooms, beside bath, all open to outside light and sun, extra storage and coal closets, open fireplaces, marble halls, stairs and bathrooms, steam heat and every modern improvement; rents $900 and upwards.”

On October 1, 1891, 479-481-483 Beacon were purchased from Seth Baker by Eugene Hamilton Fay. He and his wife, Emma Frances (Hutchins) Lewis Fay, lived in Chelsea. He was associated with Henry W. Savage, listing himself in the City Directories as a clerk at the same business address. On the same day, Eugene Fay also purchased 491 Beacon from Seth Baker.

On November 12, 1891, 479 Beacon was purchased from Eugene Fay by Dr. Holmes Mayhew Jernegan, a physician. He and his wife, Mary E. (Morrill) Moore Jernegan, lived in an apartment at 366 Commonwealth and would soon move to a new home they built at 375 Commonwealth. Eugene Fay had sold 483 Beacon in October of 1891 and sold 481 Beacon in January of 1892.

By the 1891-1892 winter season, most of the apartments at 479-481-483 Beacon had been leased. Among the first residents at 479 Beacon was Mary Bliss (Dale) Turnbull, the widow of Charles Nesbit Turnbull. She previously had lived at 111 Beacon with her parents, Ebenezer Dale and Caroline Mumford (Young) Dale. Charles and Mary Turnbull’s son, Charles Dale Turnbull, also had lived at 111 Beacon. He had married in October of 1891 to Maria (May) Peck, and they moved to an apartment at 481 Beacon. Mary Turnbull moved to 479 Beacon at the same time. By the 1892-1893 winter season, they all had moved to the Hotel Ludlow (southwest corner of Clarendon and St. James), where they remained until the 1900-1901 season, when Charles and Maria Turnbull moved to 275 Clarendon and his mother moved to the Hotel Hamilton at 260 Clarendon.

On June 15, 1892, 479 Beacon was purchased from Holmes Jernegan by Washington Butcher Thomas. He purchased 481 Beacon later that month. The two properties subsequently remained under the same ownership.

Washington Thomas and his wife, Caroline (Wadleigh) Thomas, lived at 20 Gloucester.  He was a sugar manufacturer and an investor in real estate. In 1895-1896, he built The Marlborough apartments at 416 Marlborough.

Washington B. Thomas purchased 483 Beacon in April of 1896, and in May of 1896 he purchased the empty lot at the corner of Beacon and Massachusetts Avenue. He subsequently demolished 483 Beacon and 1898 built Hotel Cambridge on the combined lot.

On December 26, 1911, Washington B. Thomas created the Marlborough Real Estate Trust, with Leslie C. Wead and Edward Peirce as trustees, to hold his real estate assets. When he established the trust, he transferred the Hotel Cambridge, The Marlborough, and the Symphony Chambers (located at 327 Massachusetts Avenue and 242-248 Huntington) to the trust, and on January 19, 1912, he transferred 479-481 Beacon to the trust.

By the mid-1920s, 479-481 Beacon and the Hotel Cambridge had been converted to be primarily medical offices, with some residential apartments.

Washington B. Thomas died in May of 1929. On December 29, 1933, the Marlborough Real Estate Trust transferred 479-481 Beacon, the Hotel Cambridge, and The Marlborough to a trust that Washington B. Thomas had created in April of 1920 for the benefit of his wife, Caroline, and their children, Helen (Thomas) Warren, the wife of Samuel Dennis Warren, III, and Margaret (Thomas) Gardiner, the wife of William Tudor Gardiner. Herbert G. Sumner, William Tudor Gardiner, and Walter E. Hewins were the trustees. They held all of the outstanding shares of the Marlborough Real Estate Trust, which they terminated in conjunction with the transfer.

Caroline (Wadleigh) Thomas died in May of 1939.

The Thomas family trust continued to own the property until the mid-1950s.

On March 1, 1955, 479-481 Beacon, the Hotel Cambridge, and The Marlborough were acquired by Miss Katherine F. Ladd. She was a secretary with Dreyfus Properties, which managed the buildings, and held them in her name on their behalf. She lived in Roslindale.

In the spring of 1970, Dreyfus Properties merged with another real estate firm, Theodore W. Berenson and Associates, to form Berenson Corp.

On March 10, 1971, 479-481 Beacon and the Hotel Cambridge were purchased from Katherine Ladd by Harold Brown, a real estate developer, and Leonard S. Green, a former Dreyfus Properties executive and subsequently vice president of Berenson Corp., as trustees of the Beacon Towers Trust. On the same day, The Marlborough was acquired by Leonard S. Green, Theodore W. Berenson, Albert L. Manley, and Joel B. Wilder – all executives of Berenson Corp. — as trustees of the Back Bay Trust.