528 Beacon is located on the north side of Beacon, between Massachusetts Avenue and Charlesgate East, with 526 Beacon to the east and 530 Beacon to the west.

528 Beacon was designed by Rotch and Tilden, architects, and built in 1893-1894 by Charles H. Dodge, mason and builder, for Dr. Harold Williams and his wife, Alice Louise (Cary) Williams. He is shown as the owner on the original building permit application dated September 18, 1893, and on the final building inspection report dated March 18, 1895.

Harold Williams purchased the land for 528 Beacon on April 27, 1893, from Leslie G. (McGregor) Morison, the wife of attorney Frank Morison. They lived at 150 Commonwealth. She had purchased the land on June 2, 1887, from the Boston and Roxbury Mill Corporation.

Click here for an index to the deeds for 528 Beacon, and click here for further information on the land on the north side of Beacon, including the Storrow Memorial Embankment on the Esplanade.

On February 24, 1890, Leslie Morison entered into an agreement with the other owners of land on the block limiting (until January 1, 1905) the depth of any new buildings to 90 feet from the north line of Beacon (with bays and other projections limited to extending another 5 feet), and limiting the height of stables and other ancillary buildings further north to no more than 12 feet in height. The agreement probably was prompted by construction of The Austerfield at 7-9 Massachusetts Avenue (502 Beacon). It was the only building on the block and its north façade extended to Back Street.

By the 1894-1895 winter season, Harold and Alice (Cary) Williams had made 528 Beacon their home. They had lived at The Huntington (Huntington at Blagden) during the previous season, and before that at 225 Marlborough. They also maintained a home on Nantucket.

Harold Williams was a physician and later Dean of Tufts Medical School.  He was one of the prime movers in establishing the Forsyth Dental Infirmary for Children at 140 The Fenway, which opened in 1915.  He maintained his medical office at 528 Beacon.  He also was a novelist, having written two books, Mr. and Mrs. Morton and Silken Threads, a Detective Story in the 1880s.

In the memoirs of her childhood, Thru the Turnstile, the Williams’s daughter, Alice Cary Williams, describes her recollections of 528 Beacon: “Our house was built by Arthur Roche [sic] and was of yellow brick, one of the innovations he brought home from the Sorbonne. The downstairs hall had a very high mantel …The staircase (another Paris innovation) parted at the first landing and went two ways, and there was a huge mirror there.  Above the library and parlor floor were two more floors of bedrooms and bath and on top was the final floor with a billiard room and the Nova Scotian servants’ bedrooms.  Also up there was a fine lethal terror, a huge skylight extending from top to bottom of the roof, which my father, armed with pail and mop, walked about on and cleaned while my mother hid her face in her pillow and planned her widow’s weeds.  The glass had no support other than its frames, and if he had fallen through he would have dropped clear down to the first floor.”

During the 1903-1904 winter season, the Williamses were traveling abroad and 528 Beacon was the home of banker William Pratt Lyman and his wife Helen (Beeckman) Lyman. They had lived at 353 Commonwealth during the previous season.  They also maintained a home in Nahant. They traveled abroad during the next season, and by the 1905-1906 season were living at 331 Beacon.

On January 14, 1908, Harold Williams entered into an agreement with the owners of 526 Beacon and 530-532 Beacon restating the restrictions on the depth of buildings and on the height of structures in rear of the properties contained in the 1890 agreement (which had expired in 1905), extending the restrictions until January 8, 1918, for 526 Beacon and until January 8, 1923, for 528-532 Beacon. 530 Beacon remained a vacant lot and the agreement probably was prompted by plans to develop it. The restrictions were further extended to May 1, 1932, by a March 29, 1912, agreement among all of the owners of the property at 506-532 Beacon.

The Williamses continued to live at 528 Beacon during the 1921-1922 winter season. They moved thereafter and by 1924 were living at The Charlesgate at 535 Beacon.

On September 13, 1922, the Theta Chi Trust acquired 528 Beacon from Harold Williams, and the house became the fraternity house of the MIT chapter (Beta Chapter) of Theta Chi fraternity. It previously had been located at 161 Bay State Road.

On August 29, 1988, the Theta Chi Trust transferred the property to the Beta Chapter of Theta Chi. 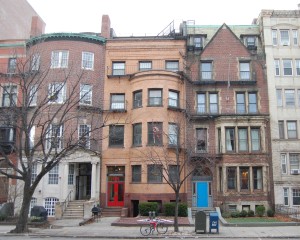