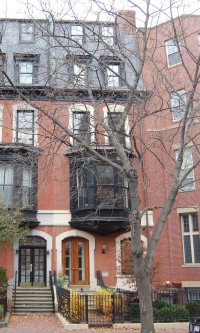 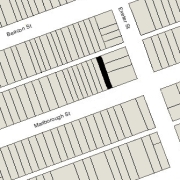 225 Marlborough is located on the north side of Marlborough, between Exeter and Fairfield, with 11 Exeter to the east and 227 Marlborough to the west.

225 Marlborough was designed by architect Louis Weissbein and built in 1873-1874 for building contractor George Wheatland, Jr., for speculative sale, one of four contiguous houses (225-227-229-231 Marlborough), designed as two sets of symmetrical pairs.

George Wheatland, Jr., had built three houses to the east, at 7-9-11 Exeter, which were completed about the time the houses at 225-227-229-231 Marlborough were begun. The deeds for 7-9-11 Exeter houses, and the deed for 225 Marlborough, were written to include various protections for the owners of the new houses.

The deed for 11 Exeter, the first house sold, included language ensuring that the house to be built at 225 Marlborough would have no windows on its eastern wall any further south than 52 feet from Marlborough (i.e., on the portion of the wall of 225 Marlborough behind 11 Exeter).

The deed for 225 Marlborough also included an easement for a “right of unobstructed light and air forever” over a strip of land at the rear of 9 Exeter (which George Wheatland, Jr., still owned) starting at the southwest corner of the lot at 9 Exeter and measuring 16 feet 2 inches north-south and 10 feet east-west. It also included a provision that, for twenty years, no stable would be erected on land George Wheatland, Jr., had retained behind 7 Exeter (he subsequently sold the land to the owner of 7 Exeter).

Click here for an index to the deeds for 225 Marlborough, and click here for further information about the land between the north side of Marlborough and Alley 417, from Exeter to Fairfield.

On August 28, 1874, 225 Marlborough was purchased from George Wheatland, Jr., by Mary Coffin (Lunt) Shepard, the wife of attorney Edward Olcott Shepard. They had married in June of 1874 and it was their first home together. They also maintained a home in Newburyport.

The Shepards continued to live at 225 Marlborough during the 1879-1880 winter season, but moved thereafter to the Hotel Vendôme. By the 1882-1883 winter season, they were living at 318 Commonwealth.

On September 3, 1880, 225 Marlborough was purchased from Mary Shepard by Dr. Harold Williams. He and his wife, Alice Louise (Cary) Williams, made it their home. They recently had returned from Vienna and Paris, where he had studied medicine after graduating from Harvard Medical School in 1878. They also maintained a home on Nantucket..

Harold Williams was a physician and later Dean of Tufts Medical School.  He was one of the prime movers in establishing the Forsyth Dental Infirmary for Children at 140 The Fenway, which opened in 1915.

He also was an author, and wrote two novels while living at 225 Marlborough. In 1883, he wrote Mr. and Mrs. Morton, which was published under the pseudonym of George Afterem, possibly naming the characters “Morton” as a private joke with his Harvard classmate and close friend, Morton Prince.  In 1885, he wrote Silken Threads, a Detective Story, published anonymously as “by the author of ‘Mr. and Mrs. Morton.’”

They continued to live at 225 Marlborough during the 1892-1893 winter season, but moved thereafter to The Huntington (Huntington at Blagden).  By the 1894-1895 season they were living at a new home they had built at 528 Beacon.

On June 16, 1893, 225 Marlborough was purchased from Alice Williams by Dr. Frederick Lafayette Jack. He was a physician and lecturer on Otology at Harvard Medical School, and later became aural surgeon-in-chief at the Massachusetts Eye and Ear Infirmary. He lived at 215 Beacon.

By the 1893-1894 winter season, 225 Marlborough was the home of Isabel (Patterson) Chadbourne, widow of dry goods merchant William Chadbourne, and their son, Dr. Arthur Patterson Chadbourne, a physician and ornithologist. 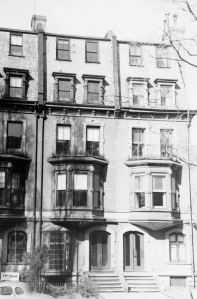 Isabel Chadbourne and Arthur Chadbourne continued to live at 225 Marlborough until about 1903, when they moved to 193 Beacon.

On April 22, 1903, 225 Marlborough was acquired from Frederick Jack by Mary Shreve (Hutchinson) Sumner, the wife of John Osborne Sumner. They previously had lived at 158 Mt. Vernon. They also maintained a home in Dublin, New Hampshire.

John Sumner was a professor of history at MIT.

In August of 1909, they applied for (and subsequently received) permission to add another story to the house.  The building permit application indicates that it was designed by E. P. Putnam.  There was no architect named E. P. Putnam listed in the City Directories for the period, and it appears likely that Eliot T. Putnam was the architect (Eliot Putnam married in November of 1903 to Marguerita Sumner (née Jones); her mother, Ella Maria (Sumner) Jones was John O. Sumner’s half sister).  The addition was constructed by A. Hathaway Co.

On February 17, 1921, it was acquired from William Stober by Clarence Vose Burrage. He and his wife, Alice Elizabeth (Nichols) Burrage, made it their home. They previously had lived at 319 Dartmouth. They also maintained a home in Cohasset.

Clarence Burrage was treasurer of a rug and carpet company.

During the 1924-1925 winter season, the Burrages were living in Kingston, Massachusetts, and 225 Marlborough was the home of Eliot Spalding and his wife, Beatrice Winfield (Cullen) Spalding. They had lived at 233 Marlborough during the previous season.  Eliot Spalding was a former officer of the Endicott Johnson Shoe Company, owned by Henry Bradford Endicott. When Henry Endicott died in 1920, Eliot Spalding was named trustee of his estate, together with Henry Endicott’s son, Henry Wendell Endicott.  The Spaldings had moved to an apartment at 301 Berkeley by the 1925-1926 season.

During the 1925-1926 winter season, 225 Marlborough was the home of publisher Henry Cannon Clark and his wife, Mary Lovering (Head) Russell Clark. By the next season, they had moved to 321 Commonwealth.

The Burrages resumed living at 225 Marlborough during the 1925-1927 season, but were again living elsewhere during the 1928-1928 and 1928-1929 winter seasons, and 225 Marlborough was the Boston home of stockbroker Alvin F. Sortwell and his wife, Elise (Pollard) Sortwell. Their primary residence was their home, Little Comfort, in Beverly Farms.

By mid-1930, the Burrages were living at 225 Marlborough once again, joined by his mother, Edith Dixon (Vose) Burrage, the widow of William Clarence Burrage.

The Burrages were living elsewhere during the 1931-1932 winter season, and 225 Marlborough was the home of Mr. and Mrs. Robert F. Perkins.

The Burrages resumed living at 225 Marlborough during the 1932-1933 winter season. They also maintained a home in Kingston, Massachusetts. Edith Burrage appears not to have continued to live with them (she died in April of 1935 in Peterborough, New Hampshire).

In November of 1936, they applied for (and subsequently received) permission to convert the property from a single-family dwelling into a lodging house.  It does not appear that they ever used the house for that purpose.

Clarence Burrage died in July of 1937. Alice Burrage continued to live at 225 Marlborough.

Alice Burrage continued to live at 225 Marlborough until about 1968. At the time of her death in October of 1975, she lived in Lincoln.

On July 30, 1968, 225 Marlborough was acquired from Alice Burrage by Lance T. Funston and his wife, Georgia Funston.

On June 19, 1969, 225 Marlborough was purchased from the Funstons by Carol B. Horowitz, the wife of Robert L. Horowitz, a real estate agent.  In July of 1969, she applied for (and subsequently received) permission to convert the property from a lodging house back into a single-family dwelling.

The Horowitzes continued to live at 225 Marlborough until about 1978.

On April 28, 1980, 225 Marlborough was purchased from Mary Booth by Emmanuel P. Daskalakis, an importer of Greek olive oils, and his wife, Andrea R. Daskalakis. On May 4, 1990, they transferred the property into her name.

The house changed hands. It remained a single-family dwelling in 2016.