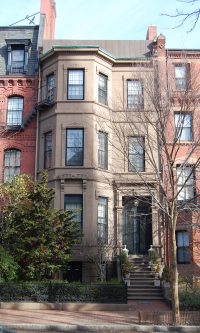 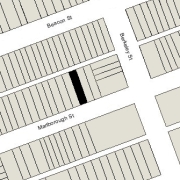 61 Marlborough was built ca. 1873 by James Henry Standish, a carpenter and builder, for speculative sale. He and his wife, Clara Ellen (Winslow) Standish, lived in Brookline,

James H. Standish purchased the land for 61 Marlborough on May 1, 1873, from the Commonwealth of Massachusetts. In April of 1873, he was issued a permit to build the house (reported in the Boston Globe on May 19, 1873), and construction probably started soon thereafter.

Click here for an index to the deeds for 61 Marlborough, and click here for further information about the land between the north side of Marlborough and Alley 420, from Berkeley to Clarendon.

On April 29, 1876, 61 Marlborough was purchased from James M. Standish by William Tucker, Jr. He and his wife, Abby S. (Wood) Tucker, lived in New Bedford, where he was a wholesale dry goods merchant.

On February 14, 1877, 61 Marlborough was acquired from William Tucker, Jr., by his daughter, Elizabeth (Tucker) Luce, the wife of wholesale wool merchant Matthew Luce. They previously had lived at 21 Hancock. They also maintained a home in Cohasset.

Matthew Luce died in February of 1902.  Elizabeth Luce continued to live at 61 Marlborough and, in about 1905, was joined by her son and daughter-in-law, Matthew and Mary Cobb (Hovey) Luce.  Mathew Luce was a wool merchant in the firm founded by his father.  In 1903, they had lived in an apartment at The Graffam at 330 Dartmouth.  They had moved by 1906.

Elizabeth Luce continued to live at 61 Marlborough until her death in February of 1926.

The house was not listed in the 1927 Blue Book.

By the 1927-1928 winter season, 61 Marlborough was the home of Henry Maynard Rees and his wife, Eliza Pugsley (McKeehan) Rees.  They previously had lived at 405 Beacon.  A physician by training, he was an executive with a bearings manufacturing company.  He later would become an investment broker, and, later still, director of medical research for the John Hancock Life Insurance Company.

On December 30, 1929, 61 Marlborough was acquired from the First National Bank of Boston by Eliza Rees.

In mid-1936, Henry and Eliza Rees moved to Brookline and leased 61 Marlborough to Charles Ellis Mason and his wife, Elizabeth (Andrew) Mason.  They previously had lived at 25 Exeter.  They also maintained a home in Hingham.  Charles Mason was a trustee and previously had been a paper manufacturer.

The Masons continued to live at 61 Marlborough in 1939, but moved thereafter to Brookline.

61 Marlborough was shown as vacant in the 1940 City Directory.

On April 29, 1940, 61 Marlborough was purchased from Eliza Rees by John Walmsley Scott. He and his wife, Ruth (Holbrook) Scott, made it their home. They previously had lived in Weston.  He was president of a fuel oil company.  According to his October 13, 1970, Boston Globe obituary, “before joining the fuel oil industry, Mr. Scott had appeared in silent movies with Fred and Adele Astaire and once was a screen dancing partner with Irene Castle.”  The Scotts continued to live at 61 Marlborough in 1942.

On June 28, 1951, 61 Marlborough was acquired from Katherine Smith by Ruth Catherine (Hebb) Hoskin Caffrey, the former wife of Franklin E. Hoskin and of Thomas Francis Caffrey. She previously had lived in Duxbury and, before that, at 256 Commonwealth in the mid-1940s. She was a retired hairdresser and operated 61 Marlborough as a lodging house.  She continued to live there until shortly before her death (in Portland, Oregon) in November of 1964.

On July 10, 1964, 61 Marlborough was acquired from Ruth Caffrey by Margaret L. Stuart.  She converted it into a dormitory for women students and, in October of 1965, filed an application to legalize the occupancy as a lodging house.  At the same time, she also filed to legalize the occupancy of 39 Marlborough, which she also had converted into a dormitory.

In February of 1966, the Board of Appeal denied her petitions.  The Building Department subsequently required that she remove all remodeling that had been installed to convert the house into a dormitory, thereby returning it to its legal use as a two-family dwelling and lodging house.

On January 6, 1967, the Hyatt Investment Corporation foreclosed on its mortgage to Margaret Stuart and transferred 61 Marlborough to Russell L. Amaral, trustee of the Ramsey Realty Trust. In April of 1967, it applied for (and subsequently received) permission to convert the property into nine apartments.

61 Marlborough subsequently changed hands. It remained an apartment house in 2015.