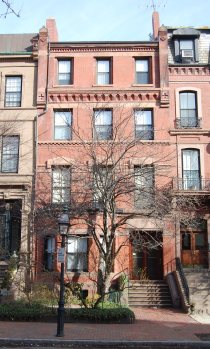 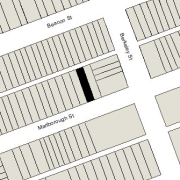 59 Marlborough was designed by Peabody and Stearns, architects, and built in 1873-1874 as the home of James Mason Crafts, and his wife, Clémence (Haggerty) Crafts. He was a professor of chemistry at MIT and later would serve as president of the college.

Click here to view the original plans for 59 Marlborough.

The land for 59 Marlborough was was purchased by Clémence Crafts on February 27, 1873, from a trust established in the will of Charles Russell Codman for the benefit of his daughter, Frances Anne (Codman) Sturgis, the wife of architect John H. Sturgis. The trust also had owned the land at 57 Marlborough, which had been built for John and Frances Sturgis but instead became the home of Charles Russell Codman, Jr., and his wife, Lucy Lyman Paine (Sturgis) Codman. The land for 59 Marlborough was originally purchased on August 1, 1863 from the Commonwealth of Massachusetts by John Sturgis.

Architectural rendering of 59 Marlborough (1873), by Peabody and Stearns; courtesy of the Boston Public Library Arts Department

Click here for an index to the deeds for 59 Marlborough, and click here for further information about the land between the north side of Marlborough and Alley 420, from Berkeley to Clarendon.

In May of 1873, Gideon Currier was issued a permit to build 59 Marlborough (reported in the Boston Globe on May 19, 1873) and construction probably began soon thereafter.  On August 3, 1874, 59 Marlborough was cited at a hearing of the Board of Aldermen as being among several houses that had been recently completed or were under construction “the cellars or basements of which are below the established city grade of twelve feet” (as reported by the Boston Globe and Boston Post on August 4, 1874).

James and Clémence (Haggerty) Crafts briefly made 59 Marlborough their home. They previously had lived at 44 Beacon. In 1874, he took a leave of absence and they moved to Paris, where they remained until 1888. They retained 59 Marlborough and leased to others.

In 1875, it was the home of John Malcolm Forbes and his wife, and Sarah (Jones) Forbes. Their usual residence was in Milton. John Forbes was a merchant in his father’s firm, John M. Forbes & Co., and also a noted yachtsman and horse breeder.

In 1876, 59 Marlborough was the home of John James Dixwell and his wife, Elizabeth Boardman Ingersoll (Bowditch) Dixwell.  They maintained their primary residence in Jamaica Plain.  John Dixwell was president of the Massachusetts National Bank.  He died in November of 1876, and Elizabeth Dixwell moved to their home in Jamaica Plain soon thereafter.

By the 1877-1878 winter season, it was the home of attorney (and future Massachusetts Governor) Roger Wolcott and his wife, Edith (Prescott) Wolcott.  They previously had lived at 22 Commonwealth.  They also maintained a home in Milton.

The Wolcotts continued to live at 59 Marlborough in June of 1880, at the time the 1880 US Census was taken, but moved soon thereafter to a new home they had built at 173 Commonwealth.

By the 1880-1881 winter season, 59 Marlborough was the home and medical offices of Dr. Franklin Henry Hooper, a physician.  He was unmarried and his mother, Adeline Denny (Ripley) Hooper, the widow of Robert Chamblet Hooper, lived with him.  Robert C. Hooper had been a ship builder and merchant.

By the 1888-1889 winter season, James and Clémence Crafts had returned to Boston and resumed living at 59 Marlborough. They also maintained a home, Griffin Croft in Ridgefield, Connecticut.

Anna Crafts married in August of 1891 to Russell Sturgis Codman of 59 Marlborough, a real estate dealer. After their marriage, they lived at 429 Marlborough.

During the 1891-1892 winter season the Crafts were traveling in Europe and 59 Marlborough was the home of Dr. James Johnson Ransom and his wife, Katherine Elizabeth (Touzalin) Ransom.  He was a physician in Burlington, Iowa, and served as chief surgeon of the Santa Fe Railroad’s Hospital Association, credited for establishing several hospitals in communities served by the railroad (his brother-in-law, Albert Edward Touzalin, was president of the Santa Fe).  The Ransoms probably were in Boston in connection with the impending marriage of Katherine Ransom’s niece, Ellen Floyd Touzalin, to textile manufacturer George Augustus Nickerson (they were married in November of 1892 in England and subsequently lived at 183 Commonwealth and in Dedham).

By the 1892-1893 winter season, the Crafts were living at 59 Marlborough once again.  He resumed his position as a professor of chemistry at MIT and, in 1897, was named MIT president.  He remained in that position until 1900.

In 1897, the Crafts added a rear ell designed by Peabody and Stearns. Plans for the remodeling are included in the Peabody and Stearns Collection in the Boston Public Library’s Arts Department (reference PS/MA.047). The drawings also include plans for a fifth story (penthouse) addition to be located in the center of the house between the front and rear chimneys; it appears this addition was not built.

Click here to view the plans for the remodeling.

Marian Crafts married in May of 1899 to Gordon Knox Bell, a lawyer in New York City. They lived in New York after their marriage.

In March of 1905, Clémence Crafts purchased 111 Commonwealth from her sister, Anna Kneeland (Haggerty) Shaw, the widow of Col. Robert Gould Shaw. Anna Shaw had purchased the house the previous year and made it her home.  She continued to live there until her death in March of 1907. After her death, James and Clémence Crafts and their two unmarried daughters, Elisabeth and Clémence, moved to 111 Commonwealth.

59 Marlborough became the home of the Crafts’ son-in-law and daughter, Russell and Anna (Crafts) Codman, who most recently had been living at 14 Gloucester. They also maintained a home in Manchester, Massachusetts. 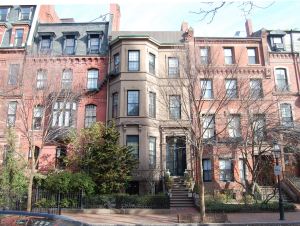 Clémence (Haggerty) Crafts died in February of 1912 and 59 Marlborough was inherited by Anna (Crafts) Codman and her three sisters: Marian (Crafts) Bell, Elisabeth Crafts, and Clémence Crafts.  On January 3, 1913, Anna Codman’s sisters transferred their interest in the property to her.

Charles Codman married in March of 1921 to Theodora Duer Larocque. After their marriage, they lived at 53 Pinckney and in Manchester.

Russell Codman, Jr., married in May of 1926 to Elinor (Eleanor) Medill Patterson, a stage actress in New York, daughter of Joseph Medill Patterson, publisher of the Chicago Times and the New York Daily News.  They separated in November of the same year and were divorced in January of 1929.  He continued to live with his parents at 59 Marlborough.

Russell Codman, Sr., died in May of 1941 and Anna Codman moved to an apartment at the Hotel Agassiz at 191 Commonwealth.  59 Marlborough remained Russell Codman, Jr.’s, home.  He and his brother, Charles, continued to be in partnership as real estate dealers. They were both wine experts and served as consultants to the S. S. Pierce Co., importers and grocers.

Russell Codman, Jr., married again in June of 1947 to Jane Davies Ferguson and they continued to live at 59 Marlborough.  On December 26, 1950, he transferred the property to her.

59 Marlborough remained in the Codman family, assessed as a single-family dwelling, in 2021.