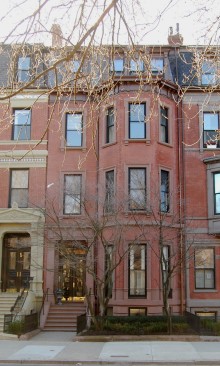 68 Commonwealth was designed by Snell and Gregerson, architects, and built ca. 1869 for David Rice Whitney and his wife, Sophia Paine (Dunn) Whitney. He was a merchant dealing in dye stuffs and later a banker. They previously had lived at 105 Pinckney.

Click here for an index to the deeds for 68 Commonwealth, and click here for further information about the land between the south side of Commonwealth and Alley 436, from Berkeley to Clarendon.

Frances Elinor Whitney married in May of 1876 to Walter Burgess, a sugar merchant in his family’s firm.  Prior to their marriage, he had lived at 62 Beacon with his parents, Benjamin Franklin Burgess and Cordelia (Ellis) Burgess  After their marriage, Walter and Frances Burgess lived at 231 Marlborough (which David Whitney had purchased in March of 1876 to be their home).

In September of 1883, Walter Burgess’s business failed. They and their daughter, Mabel Whitney Burgess, moved to 68 Commonwealth to live with David and Sophia Whitney.  Walter Burgess subsequently became a real estate dealer.

Sophia Whitney died in December of 1885.  The Burgesses moved at about that time to the Hotel Kempton at 237 Berkeley. David Whitney and his daughter, Mabel Blanche, continued to live at 68 Commonwealth.

The Burgesses divorced in about 1890, and by the 1890-1891 winter season Frances Elinor Burgess and their daughter, Mabel, had moved back to 68 Commonwealth to live with her father.

Mabel Blanche Whitney married in June of 1898 to David Everett Whitney of New York City, a medical student and later a physician.  After their marriage, they lived in Manhattan.

Mabel Burgess married in June of 1902 to William DeForest Thomson, an iron manufacturer from New York City, where they moved after their marriage.

David Whitney and Frances Elinor Burgess (frequently called F. Elinor) continued to live at 68 Commonwealth.  He also continued to own 231 Marlborough, which he had kept as rental property after the Burgesses moved in 1883. In October of 1912, he transferred it to Frances Burgess and she transferred it to her daughter, Mabel. William and Mabel Thomson subsequently made it their home.

David Burgess died in December of 1914, and Frances Burgess moved to the Hotel Vendome. 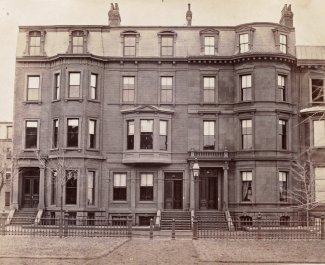 On March 31, 1917, 68 Commonwealth was acquired by real estate dealer Thomas G. Washburn. In February of 1918, he declared bankruptcy, and on July 12, 1918, the North End Savings Bank foreclosed on its mortgage and took possession of 68 Commonwealth. On April 14/15,1920, Thomas Washburn and Alexander G. Gould, trustee in bankruptcy, released all remaining interest in the property to the bank.

On July 21, 1921, 68 Commonwealth was acquired by John Valentine Dittemore. That same month he filed for (and subsequently received) permission to convert the house from a single-family dwelling into apartments. Plans for the remodeling, designed by architect Frank Chouteau Brown, are included in the City of Boston Blueprints Collection in the Boston City Archives (reference BIN G-34). The permit application does not indicate the number of apartments to be created. The plans indicate four apartments, but based on the subsequent occupancy, it appears that there were only three.

A former meat packing executive in Indianapolis, John Dittemore had retired in 1908 and moved to Boston to become a leader of the Christian Science Church. After the death of Mary Baker Eddy in December of 1910, he had differed with the Church leadership and affiliated with Mrs. Annie C. Bill in a rival organization, the Christian Science Parent Church of the New Generation. In 1932, he co-authored Mary Baker Eddy: the Truth and the Tradition.

John Dittemore and his wife, Edith Louise (Bingham) Dittemore, lived in one of the apartments at 68 Commonwealth. They previously had lived in an apartment at 330 Dartmouth, and by the 1924-1925 season moved to an apartment at 45 Commonwealth, which they owned and had converted into a multiple dwelling.

On October 27, 1926, 68 Commonwealth was acquired from John Dittemore by Earle I. Brown, probably on behalf of real estate dealer Frank A. Connors, who was reported as the buyer in a November 7, 1926, Boston Globe article.

68 Commonwealth continued to be occupied as a multiple family dwelling, with the number of units increased to four by 1940.

On February 28, 1940, 68 Commonwealth was acquired from Smith Burton, Jr., by the Berkeley Realty Corporation (Louis Heller, treasurer). and on April 26, 1940, it transferred the property to Walter H. Scott.

On May 8, 1942, the Boston Safe Deposit and Trust Company foreclosed on its mortgage from 1923 to John Dittemore, which had been assumed by subsequent buyers.

Among the residents at 68 Commonwealth from about 1942 were Paul Bromley (born Paul Bloomberg) and his wife, Eleanor Ayres (Magrane) Smith Bromley. They previously had lived at 520 Boylston.

Paul Bromley was a travel and airline agent, restaurant operator, and theatrical promoter. In his July 23, 1986, Boston Globe obituary, he was said to have “operated a number of entertainment bars and restaurants” and to have “established the nation’s first discotheque in the Old Vendome Hotel in the 1930s. … he had telephones installed on every table and customers could dial a number to order drinks and request songs.” He later would become a sales representative for the Designers Knitting Mills.

On March 30, 1946, 68 Commonwealth was acquired by Mary F. (O’Meara) Timmins, the widow of Dr. Edward Timmins. She lived in one the four apartments with their son, Paul Timmins. They previously had lived at 527 Broadway.

She continued to live at 68 Commonwealth until her death in 1957.

On December 30, 1957, 68 Commonwealth was purchased from the estate of Mary Timmins by Peter Joseph Fitzgerald and his wife, Evelyn (McDonnell) Fitzgerald. They lived in one of the apartments. On March 24, 1969, Peter Fitzgerald transferred the property into his name and the name of their daughter, Jane D. (Fitzgerald) Stearns, the wife of Edward D. Stearns.

On October 30, 1972, 68 Commonwealth was purchased from Peter Fitzgerald and Jane Stearns by George Hastings Swift, Jr., grandson of Gustavus Franklin Swift, founder of the Swift meat packing company. The property remained four apartments, with one occupied by his unmarried daughter, Byrd Goodrich Swift.

George Swift, Jr. died in December of 1982, and the property was held in trust for the benefit of his wife, Byrd Worthington (Littlefield) Swift. She died in July of 1988 in Virginia. On August 2, 1994, the property was transferred to the Swifts’ surviving children — George Hastings Swift, III, Byrd Goodrich Swift, and Ann Swift Robinson — each having one-third interest.