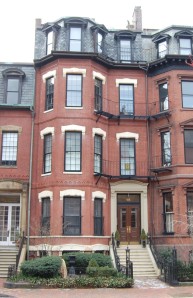 72-80 Marlborough were built first, in 1866, as a symmetrical grouping of five houses, on land which Charles Kirby acquired from Henry Lee, Jr. After completing these houses, Charles Kirby entered into an agreement on March 27, 1868, with the City of Boston to purchase a 75 foot wide lot to the east, between the new houses and the First Church, where he subsequently built 70 Marlborough in 1868-1869 and 66-68 Marlborough in 1870. The 75 foot lot was the western part of a 250 foot parcel extending to Berkeley, the eastern 175 feet of which the City had sold to the First Church. The City had acquired the parcel from the Commonwealth of Massachusetts on July 7, 1859, as partial settlement of its dispute with the Commonwealth over rights to lands in the Back Bay.

Click here for an index to the deeds for 68 Marlborough, and click here for further information about the land between the south side of Marlborough and Alley 423, from Berkeley to Clarendon.

On April 18, 1870, Charles Kirby filed with the Board of Aldermen a Notice of Intention to build at 66-68 Marlborough.

On October 20, 1870, the new house at 68 Marlborough was purchased from Charles Kirby by Harvey D. Parker, the founder and owner of the Parker House hotel. He and his wife, Julia A. (Brown) Parker, lived at 141 Boylston. Charles Kirby also assigned to him his right to purchase the land at 68 Marlborough from the City of Boston, and Harvey Parker purchased the land directly from the City.

Advertisement for Miss Putnam’s School at 68 Marlborough; The Congregationalist, 30Jul1874

Harvey Parker purchased 68 Marlborough to be the home of his niece, M. Louise (born Martha Louisa) Putnam (the daughter of William Putnam and his wife, Lydia Parker). She operated a private school for girls in the house, teaching languages and art.  She previously had lived and operated her school at 12 Boylston Place.

68 Marlborough may have been designed and built under an agreement with Harvey Parker rather than purchased by him as a completed house.  A January 26, 1871, article in The Congregationalist indicated that the house was “erected by the generosity of Mr. Parker,” and an October 10, 1878, article in the Boston Globe stated that it was “built at a liberal cost” from Louise Putnam’s “own plans, especially for school uses and conveniences.”

M. Louise Putnam continued to live (and operate the school) at 68 Marlborough during the 1885-1886 winter season, but moved thereafter to 36 Commonwealth.

On February 23, 1886, 68 Marlborough was acquired from M. Louise Putnam by Dr. Grace Wolcott. She and Dr. Lena A. Ingraham made it their home. They previously had lived at the Hotel Cluny at 543 (233) Boylston.

Both physicians, Dr. Wolcott and Dr. Ingraham were associated with the Trinity Dispensary.  They became the first medical staff members of Vincent Memorial Hospital when it was formed in 1891 to provide medical services to wage-earning women.

Vincent Memorial Hospital was named in honor of Mary Ann (Farlow) Vincent Wilson, the widow of James R. Vincent and John Wilson, Jr. She was an actress with the Boston Museum who performed under the name Mrs. J. R. Vincent. She died in September of 1887.

Dr. Ingraham also taught physiology at the Pauline Shaw’s school at 6 Marlborough, and in 1892 she inspired several of her students to form the Vincent Club to raise funds for the Vincent Hospital. The club began a tradition of annual theatrical evenings, the first of which was held in April of 1892 at 257 Commonwealth, the home of Alexander and Mary (Sullivan) Cochrane. The club continued its annual shows for many decades, becoming one of the fixtures of the social season.

By the 1887-1888 season, Dr. Wolcott and Dr. Ingraham had been joined at 68 Marlborough by Dr. Ella L. Dexter, a physician and ophthalmologist.

Dr. Ingraham and Dr. Dexter continued to live at 68 Marlborough during the 1894-1895 winter season, but moved thereafter to 7 Gloucester.

At about the same time as Dr. Ingraham and Dr. Dexter moved, Dr. Wolcott was joined at 68 Marlborough by Miss Laura Fisher. She previously had lived at 108 Marlborough. She was a teacher at the Boston Normal School in charge of training kindergarten teachers and, before that, had taught kindergarten teachers at Pauline Shaw’s School at 6 Marlborough.  In December of 1894, she was appointed by the Boston School Board to be the first Director of Kindergartens.  She resigned in 1906 and opened her own private kindergarten.

In about 1895, Dr. Wolcott and Miss Fisher were joined by George Hollis Blake and his wife, Eleanor LeFevre (Morrison) Blake.  They previously had lived at 355 Boylston. He was a manufacturers’ agent.  By the 1896-1897 winter season, the Blakes had moved to 7 Gloucester, where Drs. Ingraham and Dexter had moved the year before.

In the fall of 1895, Arthur Ludwig Karl Volkmann opened his college preparatory school for boys at 68 Marlborough. He previously had been a teacher at the Hopkinson School at 29 Chestnut. He lived in Brookline. By 1897, he had moved the school to Trinity Court (southeast corner of Dartmouth and Stuart), and in 1901 he built his own building at 415 Newbury.

In the fall of 1896, Dr. Wolcott and Miss Fisher were joined at 68 Marlborough by Miss Bertha von Seckendorff, a language teacher who offered private lessons at the house.  She continued to live there until the fall of 1898, when she moved to 24 Newbury.

Dr. Wolcott and Miss Fisher continued to live at 68 Marlborough in 1904. In mid-1904, Dr. Wolcott purchased 292 Marlborough, and they moved there together.

On May 26, 1904, 68 Marlborough was purchased from Grace Wolcott by Mary Lowell (Coolidge) Barton, the widow of Frederick Otis Barton, a merchant in New York City. Prior to her husband’s death in February of 1904, the Bartons had lived at 43 East 64th Street in Manhattan. She returned to Boston (where she was born) and purchased 68 Marlborough as her home and the home of their four children: Frederick Otis Barton, Jr., Ellen Randolph Barton, Mary Lowell Barton, and Francis Lowell Barton.

Looking west from 66 Marlborough towards Clarendon (ca. 1942), photograph by Bainbridge Bunting, courtesy of The Gleason Partnership

Mary Barton and her children continued to live at 68 Marlborough during the 1906-1907 winter season, but moved thereafter. At the time of the 1910 US Census, they were living in Concord, Massachusetts. She continued to own 68 Marlborough and lease it to others.

By the 1907-1908 winter season, 68 Marlborough was the home of Dr. Harold Townsend Swain, an obstetrician, and his wife, Harriet (French) Swain. They previously had lived in an apartment at The Grosvenor at 259 Beacon. They continued to live at 68 Marlborough during the 1913-1914 season, but moved thereafter to 226 Commonwealth .

In April of 1915, Mary Barton applied for (and subsequently received) permission to remodel the house, including making changes in the basement and to a bay window (probably in the rear).

The house was not listed in the 1915 Blue Book.

By the 1915-1916 winter season, Mary Barton and her children were once again living at 68 Marlborough. They were joined that year by Mary Barton’s unmarried sister, Ellen Wayles Coolidge. She previously had lived at 81 Marlborough with their parents, Dr. Algernon Sidney Coolidge and Mary (Lowell) Coolidge. Dr. Coolidge had died in January of 1912, and Mary Coolidge had died in February of 1915. Ellen Coolidge resumed living at 81 Marlborough by the 1916-1917 season.

Mary Barton’s daughter, Ellen, died in February of 1922 in Switzerland.

By 1925, the Warners had moved to Lincoln (where they maintained their primary residence), and Mary Barton and her children were living with her sister, Ellen Coolidge at 12 Fairfield (they are listed at both 68 Marlborough and 12 Fairfield in the 1925 City Directory).

On May 29, 1926, 68 Marlborough was purchased from Mary Barton by banker Max Ordway Whiting. He and his wife, Marion (Shearman) Whiting, made it their home.  They previously had lived in Brookline. They also maintained a home in Manchester.

Marion Whiting died in August of 1940. He moved soon thereafter to Brookline, but continued to own 68 Marlborough and lease it to others.

By 1941, 68 Marlborough was the home of William Stuart Forbes and his wife, Gertrude (Potter) Cox Forbes.  They had lived at 8 Louisburg Square in 1940.  He operated a lithography company founded by his father.  They continued to live at 68 Marlborough in 1942.

By 1943, 68 Marlborough was once again Max Whiting’s home.  After living in Brookline, he had lived briefly at 81 Beacon and then moved back to 68 Marlborough.  In 1943, he married again, to Constance (Jaques) Wadley Bader, the former wife of Edward Dow Tracy Wadley and the widow of Louis Frederick Stanton Bader.  They continued to live at 68 Marlborough in 1947, but had moved to 61 Beacon by 1948.

On July 11, 1947, 68 Marlborough was purchased from Max Whiting by Bettina (Fittemore) Makler Winant, the wife of B. Heywood Winant (called Ben Zion Winant). They were interior decorators and previously had lived at 127 Bay State Road. By 1949, they had moved to New York City, where he died in October of 1949.

On June 22, 1948, 68 Marlborough was acquired from Bettina Winant by George Constantine Anagnos and his wife, Marie A. (Decoster) Anagnos. They previously had lived at 21 Ridgewood. He was a restaurant chef. In November of 1948, they applied for (and subsequently received) permission to convert the property from a single-family dwelling into a lodging house. They continued to live there, and operate it as a lodging house, until about 1957.

On February 4, 1958, 68 Marlborough was purchased from George and Marie Anagnos by Barnett Feldstein and his wife, Edith (Martin) Feldstein. They lived in Newton.

In September of 1958, he applied for permission to legalize the occupancy as nine apartments, which he stated had been the existing condition for many years. He subsequently abandoned the application and continued to operate the property as a lodging house.

The property subsequently changed hands and on May 14, 1965, was acquired by the Hub Management Corporation (Channing S. MacDonald, president). In August of 1964, it applied for (and subsequently received) permission to convert it from a lodging house into eleven apartments.

The property subsequently changed hands, and on November 7,1973 was acquired by Margaret Rothman, Diane Pabich, and Richard Pabich, trustees of the 68 Marlborough Trust.