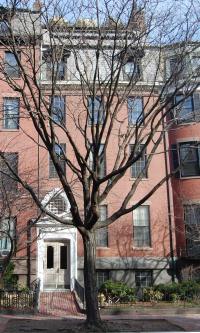 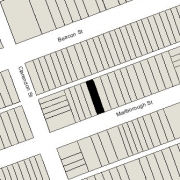 Click here for an index to the deeds for 81 Marlborough, and click here for further information about the land between the north side of Marlborough and Alley 420, from Berkeley to Clarendon. 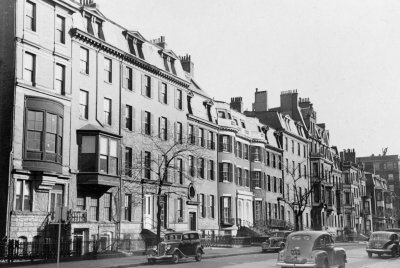 By 1868, it was the home of John L. Gardner’s son, shipping merchant and investor George Augustus Gardner, and his wife Eliza Endicott (Peabody) Gardner.  In 1865, they had lived at 7 Beacon.

Eliza Gardner died in January of 1876, and by 1877, George Gardner had moved to a new home he had built at 51 Commonwealth.

81 Marlborough was listed as vacant in the 1878 Blue Book.

By the 1878-1879 winter season, it was the home of Dr. Algernon Sidney Coolidge, a physician, and his wife, Mary (Lowell) Coolidge.  They previously had lived at 1 Fisher, and before that at 70 Chestnut. In 1871, they had lived at 71 Marlborough.  Algernon Coolidge’s brother, Joseph Randolph Coolidge, was married to John Lowell Gardner’s daughter, Julia (Gardner) Coolidge; Mary (Lowell) Coolidge was the granddaughter of John Lowell Gardner’s sister, Mary (Gardner) Lowell and her husband, Francis Cabot Lowell.

By the mid-1880s, the Coolidges also maintained a home in Cotuit.

Sidney Coolidge moved to St. Joseph, Missouri, in the mid-1880s to work for the Kansas City, St. Joseph and Council Bluffs Railroad. He married in August of 1890 to Mary Laura Colt.

Algernon Sidney Coolidge, Jr., a physician, lived with his parents at 81 Marlborough until about 1893, but had moved to 1 Exeter by 1894.

Mary Lowell Coolidge married in June of 1898 to Frederick Otis Barton, a merchant in New York City. After his death in February of 1904, she and their children returned to Boston and lived at 68 Marlborough.

Francis Lowell Coolidge, a cotton buyer, married in November of 1901 to Alice Brackett White. After their marriage, they lived in an apartment at 362 Commonwealth and then at 296 Marlborough.

On March 2, 1907, Algernon Coolidge purchased 81 Marlborough from the trustees under John L. Gardner’s will.

After their deaths, their daughter, Ellen Wayles Coolidge, moved live with her widowed sister, Mary (Coolidge) Barton, at 68 Marlborough during the 1915-1916 winter season. 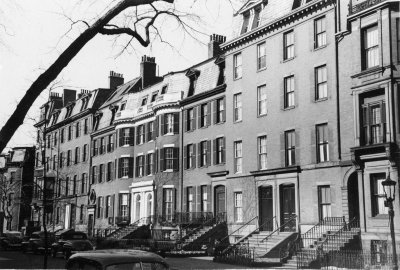 On April 24, 1917, 81 Marlborough was purchased from the five children of Algernon and Mary Coolidge by Dr. John Lewis Bremer. He and his wife, Mary (Bigelow) Bremer, lived at 416 Beacon. He was a physician and professor of histology at Harvard Medical School.

On February 28, 1919, 81 Marlborough was purchased from John Lewis Bremer by real estate trustee Augustus Peabody Loring, Jr., and his wife, Rosamond (Bowditch) Loring. They also maintained a home in Pride’s Crossing, which previously had been their primary residence.

In April of 1919, Augustus Loring applied for (and subsequently received) permission to remodel the interior of the house.  It appears likely that it was at this point that the front entrance was lowered to street level and a round window added above the entrance. The remodeling was designed by Loring and Leland, architects (Augustus Loring was the first cousin, once removed, of architect Charles Greely Loring, of Loring and Leland).

Augustus and Rosamond Loring continued to live at 81 Marlborough until about 1932, when they moved to 2 Gloucester (later numbered 404 Beacon), which he appears to have inherited from his uncle, William Caleb Loring, who died in September of 1930.

By the 1932-1933 winter season, 81 Marlborough was the home of Mrs. Mary Disbro (Sylvester) Lyman, the widow of Dr. John Van Reed Lyman.  John V. R. Lyman had been a physician in Eau Claire, Wisconsin, where he died in December of 1926.  She was an interior decorator.  She continued to live at 81 Marlborough until 1938.

By 1938, it was the home of Miss Fannie Marjorie Kattelle. She previously had lived in Virginia. She continued to live at 81 Marlborough until her death in January of 1942.

By 1943, 81 Marlborough was the home of Harold Pearson (Harald Persson) and his wife, Signe (Holmlin) Ivarson Pearson, who operated it as a lodging house. They previously had been lodgers at 127 Beacon.

They continued to live there until about 1953.

On March 18, 1954, 79 Marlborough was purchased from the Pearsons by Emil James Schiari and his wife, Dorothy E. (Johnson) Schiari, who continued to operate it as a lodging house. They previously had lived in Vermont.

On February 23, 1966, he transferred the property into both of their names.

On August 15, 1967, 81 Marlborough was acquired from Dorothy Schiari by Miss Mary Angela Cocuzzo and Miss Nancy A. Casey. They owned several Back Bay properties which they operated as lodging houses.

The property subsequently changed hands, with the owners continuing to operate it as a lodging house.

On August 3, 1979, 81 Marlborough was purchased by real estate dealer George P. Demeter. That same month, he filed for (and subsequently received) permission to convert the house from a single-family dwelling into five apartments, noting that its actual current use was as a lodging house.

On August 7, 1980, he converted the five apartments into condominium units, the 81 Marlborough Street Condominium.