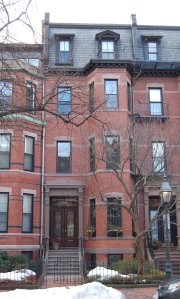 302 Marlborough was designed by architect Frederic H. Moore and built in 1878 by Daniel Weeks Beckler, builder, and Michael Nolan, mason, one of five contiguous houses (302-304-306-308-310 Marlborough) built for speculative sale.

Daniel Beckler is shown as the owner on the original building permit application for all five houses, dated January 2, 1878. It appears that he built the houses under an agreement with the Metropolitan Railroad Company, operators of a horse car system in Boston, which owned the land at the time he filed the permit application. The Company had purchased the land in 1871: two 24 foot wide lots on February 16, 1871, from Franklin Evans, and two 24 foot wide lots on April 5, 1871, from Solomon H. Howe. Daniel Beckler built five houses on the land, each on a 19.2 foot lot. The land originally was part of one of several parcels purchased from the Boston Water Power Company on January 29, 1866, by a real estate investment trust formed by John Templeman Coolidge, Franklin Evans, and Charles Henry Parker.

Click here for an index to the deeds for 302 Marlborough, and click here for further information about the land between the south side of Marlborough and Alley 427, from Fairfield to Gloucester.

After acquiring the land in 1871, the Metropolitan Railroad constructed a stable and horse car building on it, in apparent violation of the deed restrictions which provided that only private stables could be built on the land. In 1874, Charles W. Seabury, owner of the nearest house to the west, at 322 Marlborough, brought suit to require removal of the stables (Seabury v. Metropolitan Railroad Company; 115 Mass. 53). The case was dismissed on demurrer (the court concluded that Charles Seabury had not shown a basis entitling him to enforce the deed restrictions). By the time of the decision, however, the company had already made plans to relocate the stables. At its January 14, 1874, annual meeting, the management reported that “arrangements have been made for the lease for a short term of a tract of land at the junction of Marlborough and Parker streets, to which the car-house and stable on Marlborough will be removed as soon as the spring opens, and the land owned there by the corporation can then be sold” (as reported in the Boston Daily Advertiser on January 15, 1874). By mid-1874, the company had moved the stables and car-house to the leased land (located about where 390–396 Marlborough later would be built). According to an October 31, 1900, Boston Globe article about Timothy C. Taylor, a car starter who had worked with the street railway from 1871, the buildings were “carried bodily on rollers to the corner of Parker and Marlboro sts.”

In 1878, while 302-310 Marlborough were being built, the Metropolitan Railroad Company apparently entered into an agreement to sell the land to Harvey Jewell, one of the company’s directors, and he is shown as the owner (and Daniel Beckler as the former owner) on the final building inspection report dated December 23, 1878. The Metropolitan Railroad Company conveyed the land to Harvey Jewell on April 9, 1879.

Harvey Jewell held the five houses at 302-310 Marlborough as rental property. He was a lawyer and former state legislator, who had served as Speaker of the Massachusetts House of Representatives from 1868 through 1872. He and his wife, Susan A. (Bradley) Jewell, lived at 204 Beacon.

By the 1879-1880 winter season, 302 Marlborough was the home of retired Rear Admiral Charles Steedman and his wife, Sarah (Bishop) Steedman.

Rear Admiral Steedman had commanded the Boston Navy Yard from 1869 to 1872 and the South Pacific Squadron from October of 1872 to September of 1873, when he retired. Charles and Sarah Steedman had lived at 13 Hereford from about 1873 until about 1877, when Charles Steedman made an extended trip to Egypt and the Holy Land. While he was away, Sarah Steedman and their daughter, Rosa, probably lived with one of the Steedman’s married daughters.

The Steedmans continued to live at 302 Marlborough during the 1880-1881 season, but moved thereafter to Washington DC.

During the 1881-1882 winter season, 302 Marlborough was the home of William Latham Candler and his wife, Fannie Vaughan (Chandler) Candler.  They had lived in Brookline in 1880.  William Candler was treasurer and manager of the Aspinwall Land Company. He had served as a colonel in the Civil War, on the staff of General Joseph Hooker. By 1883, the Candlers were living in Brookline once again.

On July 20, 1882, 302 Marlborough was purchased from Harvey Jewell’s estate by Julia E. Hilliard and her sister, Sarah Miriam (called Miriam) Hilliard.  They lived at 116 Mt. Vernon with their mother, Elizabeth T. (Newhall) Hilliard, the widow of William Hilliard.  The Hilliard sisters and their mother were teachers and operated a school for girls in their home.

After acquiring 302 Marlborough, Miriam Hilliard opened a school for girls under twelve there. They also rented rooms to lodgers. Julia Hilliard continued to operate their primary and preparatory school at 116 Mt. Vernon, and they both continued to live there with their mother.

Elizabeth Hilliard died in April of 1886.  Julia and Miriam Hilliard continued to live at 116 Mt. Vernon until about 1887, when they moved to 302 Marlborough.

In 1885, while the Hilliard sisters were living with their mother, 302 Marlborough was the home of George Thurston, a salesman.  He continued to live there until about 1888, when he moved to 26 St. James.

After they moved to 302 Marlborough Julia and Miriam Hilliard consolidated their two schools there. They also continued to accept lodgers.

Among the lodgers in 1889 were Matthew Lewis Pennell Hurd and his wife, Wilhelmina (Williamine) Emma (Brown) Hurd. They previously had lived at 235 West Newton, and had moved to Stoneham by 1890. He was cashier for the Boston office of the Cunard Steamship Company. On January 28, 1890, he disappeared from his office, and the possibility of either foul play or embezzlement and flight were raised in the press. He returned to his home in Stoneham on February 16, 1889, and explained that ill health combined with fear of discovery of unintentional errors in his accounts had caused his absence.

The sisters ceased to operate their school in about 1889, and by 1890 they had moved to 111 Pinckney.  The next year, they moved back to 116 Mt. Vernon. They continued to own 302 Marlborough and lease it to others.

By the 1889-1890 winter season, 302 Marlborough was the home of Charles Whipple Smith, a real estate and insurance broker, and his wife, Harriet Elizabeth (Farnsworth) Smith.  They previously had lived at 34 Gloucester.  They continued to live at 302 Marlborough during the 1891-1892 season, but moved thereafter to 270 Newbury.

By the 1892-1893 winter season, 302 Marlborough was the home of Dr. George Hamlin Washburn, a physician specializing in obstetrics and gynecology, and his wife, Anna Marilla (Hoyt) Washburn.  They previously had lived at 313 Marlborough.

They all continued to live there during the 1894-1895 season, but moved thereafter to 311 Marlborough.

By the 1896-1897 winter season, 302 Marlborough was the home of Arthur Dehon Hill and his wife Henrietta Post (McLean) Hill.  They previously had lived at 19 Marlborough with his parents, Adams Sherman Hill and Caroline Inches (Dehon) Hill.

Arthur Dehon Hill was a lawyer and strong defender of civil liberties, and later would be known for representing Nicola Sacco and Bartolomeo Vanzetti after their appellate counsel, William G. Thompson, retired.

In about 1898, his parents joined them at 302 Marlborough.  They had lived in an apartment at 9 Massachusetts Avenue the previous year, and by 1899 had moved to 190 Commonwealth.

Arthur and Henrietta Hill continued to live at 302 Marlborough during the 1900-1901 season, but moved thereafter to 83 Mt. Vernon.

On May 5, 1903, 302 Marlborough was offered for sale at auction. The successful bidder probably was Serafina (Loring) Lincoln, the widow of attorney Arthur Lincoln, who took title to the property on May 12, 1903, from Julia and Miriam Hilliard. Serafina Lincoln and her daughter, Serita Lincoln, made it their home. They previously had lived at 13 Gloucester (where Arthur Lincoln died in December of 1902).

Soon after acquiring 302 Marlborough, Mrs. Lincoln and her daughter traveled abroad (they sailed from Boston on the SS Commonwealth on August 27, 1903) and 302 Marlborough was leased by others for several years.

During the 1903-1904 winter season, it was the home of James A. Jones and his wife, Mary E. (Brown) Jones.  He was general manager of the West Indies Department of the United Fruit Company.  By 1905, they were living in Swampscott.

By the 1906-1907 winter season, Serafina Lincoln and Serita Lincoln had resumed living at 302 Marlborough.

In April of 1910 (at the time of the 1910 US Census), they were living in Washington DC and 302 Marlborough was the home of William Brewster, a trustee and manager of trust estates. He traveled frequently and maintained homes in Newport and in Ryde on the Isle of Wight. He previously had maintained his Boston home at 131 Beacon.

By the 1910-1911 winter season, Serafina and Serita Lincoln were living at 302 Marlborough once again.  In October of 1911, Serita Lincoln married Matthew Bartlett, a banker and broker; after their marriage; after their marriage, they lived in Brookline. By the 1917-1918 winter season, they lived at 356 Beacon. They also maintained home in Beverly Farms.

Serafina Lincoln continued to live at 302 Marlborough during the 1913-1914 season, but moved thereafter to The Abbotsford at 186 Commonwealth.

Serafina Lincoln moved back during the 1915-1916 season, but then moved permanently to The Abbotsford, where she continued to live until her death in November of 1926.

302 Marlborough was not listed in the 1917-1920 Blue Books and appears to have been largely unoccupied during that period. William Brewster listed it as his residence in the 1917 City Directory and showed it as his mailing address on a passport application in May of 1920 and April of 1921.

On February 13, 1922, Serafina Lincoln transferred the property to her daughter.

Matthew and Serita Bartlett at 15 Gloucester but do not appear to have leased 302 Marlborough to others. The house was omitted from the Blue Books, but the Lists of Residents indicate that it was the home of a cook and a maid during most years in the 1920s and early 1930s.

On June 26, 1934, 302 Marlborough was acquired from Serita Bartlett by the Massachusetts Woman’s Christian Temperance Union (WCTU).  In July of 1934, it applied for (and subsequently received) permission to convert the property from a single-family dwelling into “offices and dwelling.”

By 1953, the property was considered by the Building Department as a lodging house and dormitory, and was cited for failing to have adequate egress from all rooms.

On June 22, 1993, 302 Marlborough was purchased from Knight Radio, Inc., by Peter S. Voss and his wife, Pamela L. Voss. In November of 1993, they applied for (and subsequently received) permission to convert the property from offices and dwelling units into a single-family dwelling.

302 Marlborough remained a single-family dwelling in 2021.