From May 17 to May 27, 1875, the vacant land on the west side of Exeter between Commonwealth and Marlborough was the site of P. T. Barnum’s Great Roman Hippodrome.

Advertisements and press accounts for the extravaganza indicated that it was held at the corner of Commonwealth and Exeter, and a May 17, 1875, Boston Evening Transcript commented that the “hippodrome which [Barnum] has erected covers the whole square between Commonwealth avenue and Marlborough street.” The Hotel Agassiz had already been constructed at 191 Commonwealth, on the northeastern corner of Commonwealth and Exeter, and it therefore appears that the lots used by the Hippodrome were on the western side of Exeter, where 17-19 Exeter, 197 Commonwealth, and 220-224 Marlborough later would be built (and possibly also on lots further west).

Barnum’s Hippodrome was held in an amphitheater which the Transcript article described “will comfortably seat some 16,000 persons.  The central section, at opposite points of the ellipse, will be provided with chairs at a higher price.” The program featured (according to Barnum’s advertising) a “spectacular pageant,” the “Congress of Nations,” which the Boston Globe’s May 18, 1875, report on the show described as a procession of actors representing “the dignitaries of the various great countries of the world in characteristic vehicles, followed by soldiers in appropriate uniforms, Indians, Chinese, Turks, Africans, etc.” The advertising also promised elephants, dromedaries, and bison; chariot races and exhibitions of other “sports of ancient Greece and Rome;” trotting horse races, and a balloon ascension by aeronaut Washington H. Donaldson in his hot air balloon, the “P. T. Barnum.”

The last performance was on May 27, 1875, the Boston Evening Transcript reporting on that date that “the popular enthusiasm for the magnificent sports and spectacles of the grand arena continues unabated to the last,” and that “the full programme will be presented as usual this evening, but by tomorrow morning the whole vast organization will have been transferred to Lynn, where it will finish the week.” 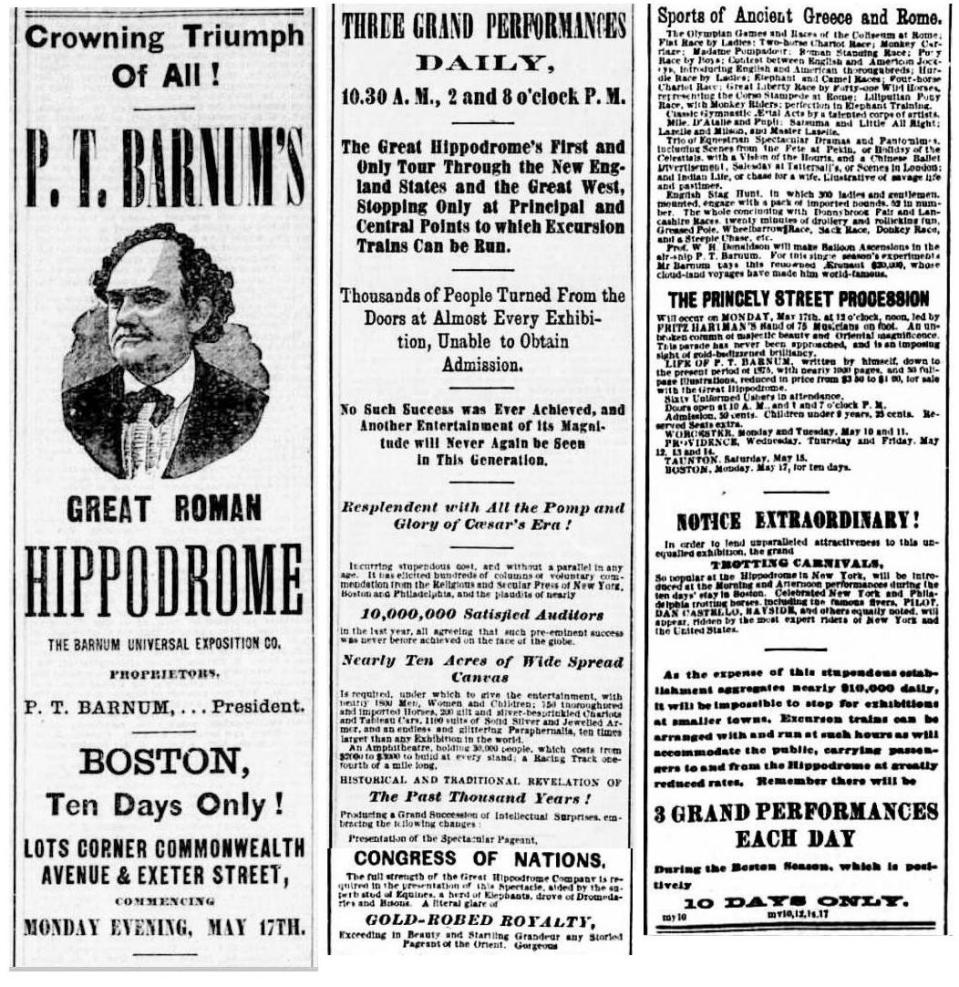 Advertisement from the Boston Post, 12May1875 (single column advertisement reformatted into three columns)