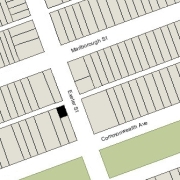 17 Exeter is located on the west side of Exeter, between Marlborough and Commonwealth, with 220-224 Marlborough to the north, across Alley 426, and 19 Exeter to the south.

17 Exeter was built ca. 1881 as a stable and carriage house for 19 Exeter, which was designed by architect J. Pickering Putnam for Dr. Henry Cecil Haven, a physician.

The house and stable were built on land Henry Haven purchased from the Commonwealth of Massachusetts on May 9, 1881. The original lot had a frontage of 56 feet on Commonwealth, and on May 19, 1881, he sold the western half to Thomas M. Rotch, who subsequently built his home at 197 Commonwealth.

Click here for an index to the deeds for 17 Exeter, and click here for further information about the land between the north side of Commonwealth and Alley 426, from Exeter to Fairfield.

The original stable extended the width of Henry Haven’s lot and across 23 feet of the rear of 197 Commonwealth and was two stories high. On February 7, 1883, he entered into an agreement with Thomas Rotch providing for the shared use of the stables and for the eventual construction of a party wall on the boundary line, dividing them into separate structures. This division appears to have occurred soon thereafter and the stables are shown as separate structures on the 1887 Sanborn map.

Henry Haven lived and maintained his medical practice at 19 Exeter. He was unmarried. Living with him were Rev. Henry Freeman Allen, Rector of the Church of the Messiah (Episcopalian) on Florence Street in the South End, and his wife, Georgianna May (Stowe) Allen, the daughter of author Harriet Beecher Stowe. They all continued to live at 19 Exeter during the 1886-1887 winter season. In May of 1887, Rev. Allen purchased 200 Beacon, and he and his wife made it their home. Dr. Haven moved there with them.

In June of 1887, Henry Haven petitioned the Board of Aldermen for (and subsequently received) approval to add a bay window projecting 2½ feet over the street from the second story of the stable. It was identified in the petition as 17 Exeter, implying his intention to convert it into a dwelling.

On July 13, 1887, 19 Exeter was purchased from Henry Haven by Charlotte Pyncheon (Wales) Chamberlain, the wife of Dr. Myron Levi Chamberlain. He was a physician and also maintained his medical office at the house.

The Chamberlains completed the remodeling of 17 Exeter initiated by Dr. Havens, including adding a third story.  The 1887 Sanborn map shows the house as three stories and with a bay window on Exeter, with a notation “Being built Aug. ’87.”

17 Exeter was first listed as a residence in the 1888 Blue Book and remained a residence thereafter. As part of the conversion, the Chamberlains created windows in the party wall overlooking the stable at 197 Commonwealth, and on July 18, 1899, they entered into an agreement with Thomas Rotch that the windows could be maintained under a “revocable license” from the owner of 197 Commonwealth. 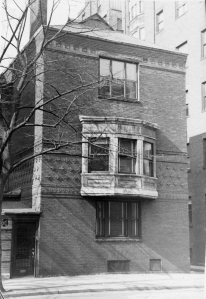 By the 1887-1888 winter season, 17 Exeter was the home and studio of artist Frederic Porter Vinton and his wife Annie Mary (Pierce) Vinton.  They previously had lived (and he had maintained his studio) at 1 Park Square.

During the 1889-1890 winter season the Vintons were living elsewhere and 17 Exeter was the home of George Howland Stoddard and his wife, Eoline (Sheffield) Stoddard.  They previously had lived at 3 Beacon Hill Place.  George Stoddard was manager (and later treasurer and manager) of the Quincy Cold Storage Warehouse.  They subsequently moved to Brookline and by the 1892-1893 season were living at The Grosvenor at 259 Beacon.

By the 1892-1893 winter season, 17 Exeter was the home of Hannah Elizabeth Snow and Mary A. Snow, daughters of Rev. Theodore W. Snow, an Episcopal minister.  They previously had lived at 5 Brimmer.

A June 4, 1893, note in the Boston Herald’s Personal and Social Gossip column commented that the  “Misses Snow have been occupying this season the quaint little house in Exeter street, built for F. P. Vinton, the artist, with its winding turret staircase, corner chambers and the great salon, which was formerly the studio.”

Hannah and Mary Snow continued to live at 17 Exeter during the 1894-1895 season, but moved thereafter to the Hotel Victoria at 273 Dartmouth.

By the 1896-1897 winter season, 17 Exeter was the home of Mary (Power) Lord, the wife of George Washington Taylor Lord, a partner in Lord and Taylor, the dry goods and clothing store founded by his father.  She continued to live there in 1898.

By the 1903-1904 winter season, 17 Exeter was the home of Edward Lane White and his wife, Ida Vining (Moseley) White.  They also maintained a home in Lowell, which previously had been their year-round residence.  He was a leather manufacturer.  They continued to live at 17 Exeter during the 1904-1905 season, after which they moved to 408 Beacon. 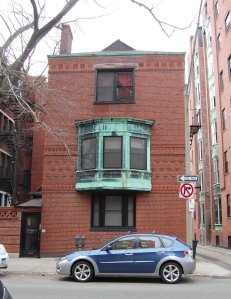 By the 1906-1907 winter season, 17 Exeter was the home of architect Amos Amory Lawrence (whose sister, Edith, had married Harold Jefferson Coolidge in 1903).  Amos Lawrence previously had lived at 61 Commonwealth with his father and step-mother, Amory Appleton Lawrence and Gertrude Austin (Rice) Lawrence.  He had moved back to 61 Commonwealth by 1909.

On July 27, 1908, 17-19 Exeter were purchased from Charlotte Chamberlain by Lillior (Lillie) Taylor (Dowling) Nutting, the widow of William B. Nutting. She was the sister of Mark Temple Dowling, a real estate dealer in partnership with James Sumner Draper. She transferred the property to J. Sumner Draper on July 30, 1908. In a August 2, 1908, Boston Globe article on the transaction, the new owners were said to “propose to make extensive improvements and convert it into one of the most up-to-date apartment hotels in the Back Bay.”

On February 15, 1909, 17-19 Exeter were purchased from J. Sumner Draper by Mary (McBurney) Schlesinger, the widow of iron and steel merchant Barthold Schlesinger. She lived in Brookline. A trust established under the will of her husband owned 220-224 Marlborough, across the alley.

17 Exeter remained a single-family dwelling and by April of 1910 (when the US Census was taken), it had become the home of Mary Schlesinger’s son-in-law and daughter, Jasper Whiting and Marion McBurney (Schlesinger) Whiting. They had lived at 68 Chestnut in 1909.

A chemical engineer by training, Jasper Whiting was a chemical company executive and an inventor.  Among his inventions were a process for making Portland cement from blast furnace slag and the “Whiting Cell” used in the manufacture of chlorine gas.

During the 1911-1912 winter season, 17 Exeter was the home of Dr. Charles Galloupe Mixter, a physician, and his wife, Helen Worthington (McIntosh) Mixter.  They had married in October of 1911 and 17 Exeter probably was their first home together.  Prior to their marriage, he had lived at 180 Marlborough with his parents, Dr. Samuel Jason Mixter and Wilhelmina (Galloupe) Mixter.  He also maintained his medical practice there with his father and brother, William Jason Mixter.  By the 1912-1913 winter season, Charles and Helen Mixter had moved to 247 Beacon.  He continued to maintain his medical practice at 180 Marlborough.

During the 1912-1913 winter season, 17 Exeter was the home of William Arthur Mitchell, secretary and assistant treasurer of a shoe manufacturing company.  Earlier in 1912, he and his wife, Grace (Rogers) Harwood Mitchell, had lived at 1100 Beacon.  They were divorced in May of 1912 and he moved to 17 Exeter.  He subsequently moved to the Hotel Lenox at 61 Exeter and remarried in November of 1914 to Adeline Louise (Bachelder) Magee, the former wife of Charles Gilbert Magee.

During the 1918-1919 winter season, 17 Exeter was the home of Miss Eliza Chapman Post.  She previously had lived in an apartment at 50 Commonwealth and, before that, at 406 Marlborough with her maternal aunt, Susan (Chapman) Dexter, the widow of Frederic Dexter.  Eliza Post died in March of 1919.

During the 1919-1920 winter season, 17 Exeter was the home of Allen Gilbert Cram, an artist, and his wife, Sylvia Dorothy (Parkyns) Cram.  They moved soon thereafter and by 1923 were living in Santa Barbara, California.

By the 1920-1921 winter season, 17 Exeter was the home of Dallas Lore Sharp and his wife, Grace (Hastings) Sharp.  They previously had lived in Hingham.  He was a professor of English at Boston University and a noted author and naturalist.  They continued to live at 17 Exeter during the 1921-1922 season, but then moved back to Hingham.

During the same period, 17 Exeter also was the home of Leon L. Collver, a tour company executive, and his wife Ethel (Blanchard) Collver, an artist.  They had lived at 19 Beacon earlier in 1920, and had moved to 125 Commonwealth by mid-1922.

By the 1922-1923 winter season, 17 Exeter was the home of Ellen Augusta (Raymond) Whitman, widow of Francis Henry Whitman, and their son, Henry B. Whitman, a woolen mill executive.  They previously had lived in Cambridge.

On May 2, 1923, 17-19 Exeter were purchased from Mary Schlesinger by coal merchant Smith Payne Burton, Jr. On the same day, he also purchased 220-222-224 Marlborough from the Schlesinger trust. The May 6, 1923, Boston Globe article on the transaction described the properties as follows: “one building contains 18 modern suites, another six suites, and there is also a single brick dwelling.”

Ellen Whitman died in April of 1925.  Henry Whitman continued to live at 17 Exeter until about 1930, when he moved to Brookline.

By the 1932-1933 winter season, 17 Exeter was the home of Miss Bertha Martha Louise Von Hauck.  In 1934, she married James F. Cavanagh, an attorney and former State Senator.  After their marriage they lived at the Maryland Apartments at 512 Beacon.

By the 1935-1936 winter season, 17 Exeter was the home of Alexander Macomber, a consulting engineer, and his wife, Alfrieda (Terry) Macomber.  They previously had lived in an apartment at the Hotel Royal at 295 Beacon.

The Macombers continued to live at 17 Exeter until about 1939, when they moved to an apartment in the Miles Standish at 30 Bay State Road.

On May 9, 1940, real estate dealer Henry C. Brookings foreclosed on a mortgage given by Mary Schlesinger and assumed by subsequent buyers and sold 17-19 Exeter to Elina M. Johnson of Woburn. She was a stenographer with the First National Bank and probably was acting for Henry C. Brookings or a subsequent owner.

By 1940, 17 Exeter was the home of Walter Roy McCormack, an architect and Dean of MIT’s School of Architecture, and his wife, Lillian Hutchins (Amsden) McCormack. They previously had lived in Cleveland.

The McCormacks continued to live at 17 Exeter until about 1949.

In August of 1949, Haven Realty filed for (and subsequently received) permission to convert the property from a single-family dwelling (described as a “one duplex apartment”) into three apartments.

In March of 1954, Julius Kalman’s real estate firms were identified as among the victims of George L. Maitland, who had been indicted for obtaining loans based on fraudulent representations. On February 6, 1956, Julius Kalman committed suicide at his home in Allston. The Boston Globe reported that the suicide was “on the eve of one of the trials growing out of the so-called Maitland loan fraud case” in which he “was to have been a star witness” for the prosecution.

On March 29, 1957, Haven Realty transferred 17 Exeter to Jennie Loitman Barron, Mark R. Werman, and Jacob Grossman, executors of the will of Julius Kalman.

On September 3, 1958, 17 Exeter was acquired from Julius Kalman’s estate by the Clover Realty Corporation of Newton (Peter Turchon, treasurer).

On January 16, 1959, 17 Exeter was acquired from the Clover Realty Corporation by Sidney Paul Dobrov and his wife, Mary J. (D’Amore) Dobrov. He was a grocer and she was the president and treasurer of the Mar-Jean Sportswear Company. They lived at 304 Commonwealth and appear to have purchased 17 Exeter as income property.

Sidney Dobrov died in August of 2005.

On January 26, 2012, 17 Exeter was purchased from Mary Dobrov by Nada Ibrahim Abdulkarim.

17 Exeter remained assessed as a three-family dwelling in 2016.