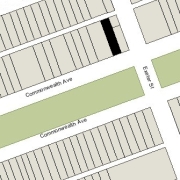 197 Commonwealth is located on the north side of Commonwealth, between Exeter and Fairfield, with 19 Exeter to the east and 199 Commonwealth to the west.

197 Commonwealth was designed by Rotch and Tilden, architects, and built in 1881-1882 by Woodbury & Leighton, masons, as the home of Dr. Thomas Morgan Rotch, a pediatrician and professor at Harvard Medical School, and his wife Helen (Rotch) Rotch. They previously had lived at 77 Marlborough.  Thomas Rotch is shown as the owner on the original building permit application, dated October 28, 1881.

Thomas Rotch purchased the land for 197 Commonwealth on May 19, 1881, from Dr. Henry Cecil Haven. It was the western half of a 56 foot wide lot that Dr. Haven had purchased from the Commonwealth of Massachusetts on May 9, 1881. He built his home on the eastern half at 19 Exeter (195 Commonwealth). 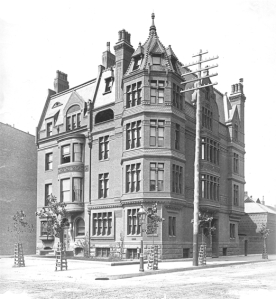 Click here for an index to the deeds for 197 Commonwealth, and click here for further information about the land between the north side of Commonwealth and Alley 426, from Exeter to Fairfield.

Henry Haven also built a large stable and carriage house behind 19 Exeter, extending the width of his lot and across 23 feet of the rear of 197 Commonwealth. On February 7, 1883, he entered into an agreement with Thomas Rotch providing for the shared use of the stables and for the eventual construction of a party wall on the boundary line, dividing them into separate structures. This division appears to have occurred soon thereafter and the stables are shown as separate structures on the 1888 Bromley map. The stable behind 19 Exeter subsequently became a separate residence with the address of 17 Exeter.

The Rotches’ only son, Thomas, Jr., died at the age of 23 of pneumonia. The Rotches donated the Thomas Morgan Rotch, Jr., Memorial Hospital building at Harvard Medical School in his memory.

In his will, Thomas Rotch left 197 Commonwealth in trust for the benefit of Helen Rotch during her lifetime and then for the benefit of her nephew (and his first cousin, once removed) Arthur Grinnell Rotch and his wife, Helen Gilman (Ludington) Rotch.

By the 1915-1916 winter season, Arthur and Helen (Ludington) Rotch had made it their home. They previously had lived at their home in Lakeville, Massachusetts, Hill Top Farm.

Arthur G. Rotch was a landscape architect prior to World War I.  He subsequently he served as New England division manager of the American Red Cross and was a leader in various social works organizations.  He was the first Massachusetts administrator of the Works Progress Administration and was Commissioner of the Massachusetts Department of Public Welfare during World War II.

Josephine Noyes Rotch married in June of 1929 to Albert Smith Bigelow, Jr. In December of 1929, she died in a highly-publicized murder-suicide or double suicide in New York City with her lover, Henry (Harry) Grew Crosby. The son of Stephen Van Rensselaer Crosby and Henrietta Marian (Grew) Crosby, he was born at 304 Berkeley and raised at 95 Beacon. He was a poet and publisher, and lived in Paris where he and his wife, Mary (Polly) Phelps (Jacob) Peabody Crosby (known as Caresse Crosby), founded the Black Sun Press, an English language press that published the works of many of the modernist authors of the day, including James Joyce, D. H. Lawrence, and others.

Helen Morgan Rotch married in September of 1938 to Dr. Charles Lee Buxton, a gynecoiogist and later a professor at Yale School of Medicine and noted advocate of birth control. After their marriage, they lived in New York City.

Arthur and Helen Rotch and their unmarried daughters, Lydia, Katherine, and Phoebe, continued to live at 197 Commonwealth until about 1942. By 1943, they had moved to an apartment at 137 Marlborough. They also continued to maintain Hill Top Farm in Lakeville.

The house was shown as vacant in the 1943 Boston City Directory.

On November 29, 1943, 197 Commonwealth was acquired from Kate Goldberg by Ada S. (Hertz) Bourne Autio, the wife of Matti Autio, and Elin (Villander) Spongberg, the wife of Nels Spongberg. Matti and Ada Autio lived in Maynard; Nels and Elin Spongberg lived at 111 Commonwealth, where they operated a lodging house.

Earlier in November of 1943, prior to taking title to the property, they had filed to convert 197 Commonwealth from a single-family dwelling into a lodging house.  They abandoned their application and in June of 1944, they were cited by the Building Department for failure to change the legal occupancy to a lodging house and also for failure to provide the necessary additional means of egress.

In March and April of 1945, the Spongbergs filed for (and subsequently received) permission to convert the property into a single-family dwelling and lodging house, and to construct fire balconies to provide the required egress.

On February 13, 1947, 197 Commonwealth was acquired from Elin Sponberg by Benjamin F, Ross, trustee of The One Hundred Ninety-Seven Commonwealth Avenue Trust. The property was managed by Frances Willard (Hammond) Christian, widow of Dr. Andreas (Andrew) Forest Christian, who lived at 223 Beacon.

In March of 1947, she filed for (and subsequently received) permission to remodel the property and convert it into eleven apartments, including rebuilding the roof to convert the existing attic into a penthouse with a small deck in the front and lowering the front entrance from the first floor to the basement.  The remodeling was designed by architect Clark F. Merrick.  Plans for the remodeling are included in the City of Boston Blueprints Collection in the Boston City Archives (reference BIN R-78). 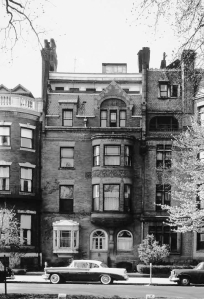 197 Commonwealth (ca. 1955-1959); detail from photograph from the Kepes-Lynch Photograph Collection; copyright Massachusetts Institute of Technology and licensed under the Creative Commons Attribution/Non-Commercial license

The same month, Frances Christian also applied for (and subsequently received) permission to convert the garage and servants’ quarters at the rear of the property into a single-family dwelling. In conjunction with that filing, she and Benjamin Ross filed a letter with the Building Department indicating that the property “was purchased with the verification of the fact that the building was first used as a coach house and servants quarters and later as a two car garage and chauffeurs living quarters.”

On December 15, 1947, David S. Green foreclosed on a mortgage given by Benjamin Ross and took possession of the property.

The property subsequently changed hands and on February 1, 1966, was acquired by Glenn Fortier, trustee of the 197 Realty Trust.  In December of 1974, he filed for (and subsequently received) permission to legalize the occupancy of the property as twelve (rather than eleven) units, which he indicated was the existing condition.

On March 21, 1979, 197 Commonwealth was acquired from Glenn Fortier by the Phaeton Corporation (Paul S. Cohen, president and treasurer). In September of 1979, it filed for (and subsequently received) permission to convert the property from twelve apartments into six apartments.  In April of 1980, it amended the permit to add a mansard roof on the top floor, enclosing the deck in front of the existing penthouse. In June of 1980, it applied for (and subsequently received) permission to remodel the interior of the former carriage house at the rear of the building, retaining it as a single-family dwelling.

On September 8, 1980, Phaeton Corporation converted the property into seven condominium units (six in the main building and the seventh in the former carriage house), the 197 Commonwealth Condominium.