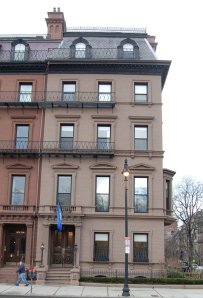 The land on which 1-2-3 Arlington were built was originally part of a larger tract purchased from the Commonwealth of Massachusetts on August 1, 1857, by William Warren Goddard and T. Bigelow Lawrence.  They sold a corner lot (40 feet on Beacon by 112 feet on Arlington) to John C. Gray on September 1, 1859, and a second lot of the same size, immediately to the west, to John Simmons on October 1, 1859.  John Simmons purchased John Gray’s lot on November 1, 1859, and purchased an additional strip of land five feet by 112 feet from Goddard and Lawrence on April 30, 1860, completing a lot which was 112 feet on Arlington and 85 feet on Beacon on which he had 1-2-3 Arlington built.

Click here for an index to the deeds for 1 Arlington, and click here for further information about the land on the south side of Beacon from Arlington to Berkeley, north of Alley 421.

An April 10, 1860, Boston Evening Transcript article reported that J. E. & N. Brown had filed a Notice of Intention with the Board of Alderman to build build “on Arlington and Beacon streets.” On May 25, 1860, the Transcript reported that “”At the corner of Beacon and Arlington streets the piles are now being driven for a block of three uniform houses, each 30×65 feet, the exteriors to be of Connecticut brown stone, of a highly ornamental character.  They are erected under the superintendence of Messrs. J. E. & N. Brown, for John Simmons, esq., and are intended to be finished throughout in a style equal to the best houses in that vicinity.” On August 7, 1861, the Boston Traveller reported that the three houses were “nearly completed.”

In his Houses of Boston’s Back Bay, Bainbridge Bunting indicates that 1-2-3 Arlington “probably” were designed by Gridley Bryant. A May 6, 1862, advertisement published in the Boston Evening Transcript by John Simmons, offering two of the three houses for sale, confirms that the architect was Gridley Bryant. Roger Reed, in his Building Victorian Boston: The Architecture of Gridley J. F. Bryant states that they were designed by Bryant in association with Arthur Gilman, and cites a May 25, 1860, Boston Evening Transcript article as his source (that article discusses a number of houses and states that thirteen of them were by Bryant and Gilman, without providing specific addresses).

1-2-3 Arlington were designed to give the appearance of one large, monumental building, in the French Academic style popular in Paris during the 1850s and 1860s.  2 Arlington – the middle house – is set slightly further back from the street than the two surrounding houses, whose mansard roofs project outwards slightly to frame it. As originally designed, there was a five foot wide passageway at the rear of 2 and 3 Arlington, running parallel to Arlington and underneath the rear ells, to provide access to the alley for all three houses.

On June 22, 1863, William Fletcher Weld and his wife Isabella Melissa (Walker) Weld purchased 1 Arlington from John Simmons.  William Weld was a shipping merchant whose firm, William F. Weld & Co., was at one time the largest ship owner in America, sailing under the “Black Horse” flag.  He also was a major investor in railroads and real estate.

The Welds lived at 1 Arlington until about 1879, when they moved to Philadelphia. He continued to own 1 Arlington, which appears to have been left vacant. They also maintained a home in Newport.  Their unmarried son, George Walker Weld, lived with them. William Weld died in December of 1881. After his death, Isabella and George Weld moved to 115 Commonwealth.

On September 14, 1882, William F. Weld’s estate offered 1 Arlington for sale at auction. The auction notice published in the Boston Journal by Samuel Hatch & Co., auctioneers, noted that “on the main entrance floor is a large reception room, dining and library room, beautiful drawing rooms on second story, and ample chambers and dressing rooms above, with bath rooms, water closets, and the best of plumbing throughout the house.  Heavy plate glass windows.”

The successful bidder was Leonard Richard Cutter, who took title from the Weld estate on October 9, 1882. He and his wife Mercy Fairbank (Taylor) Cutter, made it their home.  They previously had lived at 27 Hancock.

Leonard Cutter was a builder and real estate investor, and served at various times as Assessor, Alderman, Member of the Boston Water Board, and Water Commissioner.  He also served as interim Mayor of Boston in 1873.

Emma Cutter married in March of 1885 to Horace W. Baxter, Jr., a bookkeeper in a bank and later a real estate investor and trustee in association with Leonard Cutter. After their marriage, they lived in Brighton with his parents, Horace W. Baxter and Elizabeth Corey (Davis) Baxter.

Agnes Cutter married in November of 1887 to Dr. Enos Hoyt Bigelow, a physician. After their marriage, they lived in Framingham.

The Cutters continued to live at 1 Arlington until their deaths in 1894: Mercy Cutter in January of 1894 and Leonard Cutter in July of 1894.

In September of 1905, Horace Baxter, Jr., married again, to Sarah E. Jenks, and they moved soon thereafter to 524 Commonwealth.

1 Arlington continued to be owned by the Cutter estate. It was not listed in the 1907-1909 Blue Books.

By 1910, 1 Arlington was the home of Mrs. Celia E. Murray, who operated it as a lodging house.  She continued to live there until about 1917, when she moved to 14 Newbury.

On August 12, 1920, 1 Arlington was acquired from the Cutter estate by attorney John D. Graham. On the same day, he transferred the property to the Roman Catholic Archbishop of Boston.

1 Arlington became the diocesan center of the League of Catholic Women of Boston.  An August 14, 1920, Boston Globe article noted that it would be the first “permanent headquarters” of the organization. The League continued to maintain its offices there until about 1968.

In September of 1951, the Commonwealth of Massachusetts Metropolitan District Commission modified the intersection at Arlington and Beacon, creating a curve at the southwest corner that reduced the lot at 1 Arlington by approximately 69 feet.

On August 28, 1968, 1 Arlington was acquired from the Roman Catholic Archbishop of Boston by the One Arlington Associates LP, a partnership of Daniel J. Finn, Joseph M. Krol, William E. Sayers, and Francis B. Sellew.

In December of 1968, the One Fifty Four Beacon Street Associates LP (another partnership of the same co-venturers) filed for (and subsequently received) permission to convert the property from a club (the League of Catholic Women) into ten apartments.

Joseph and Ute DeMarco owned and operated the Boston School of Modern Languages, located at 795 Boylston, and moved the school to 1 Arlington after purchasing the building. It remained there until the late 1980s, when it moved to Roslindale. Emerson College subsequently occupied the building for office space.

Joseph Jokton DeMarco died in November of 1994 and 1 Arlington was inherited by Ute DeMarco. She continued as president of the Boston School of Modern Languages. In October of 1998, she married again, to Count Jochen von Haller.

View across the Public Garden towards Arlington and Beacon (ca. 1895), courtesy of Anthony Mitchell Sammarco