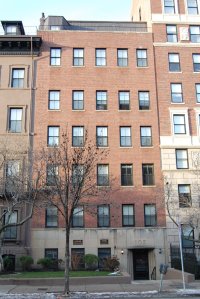 102 Beacon is located on the north side of Beacon, between Arlington and Berkeley, with 100 Beacon to the east and 104 Beacon to the west.

102 Beacon was designed by architect Arthur Gilman and built ca. 1856, one of a symmetrical pair (100-102 Beacon) with a shared portico and front stairs and a mansard roof (among the earliest in the Back Bay). It was originally numbered 101 Beacon, but re-numbered as 102 Beacon ca. 1862 when homes were built on the south side of the street.

102 Beacon was built for Charles Bucknam Fessenden and his wife, Susan Elizabeth (Skinner) Fessenden. Charles Fessenden was a shipping merchant and ship owner in the East India trade. They lived at 6 Beacon and then at 22 Beacon; it does not appear that they ever occupied 102 Beacon.

In his Houses of Boston’s Back Bay, Bainbridge Bunting does not attribute 100-102 Beacon to a specific architect. However, the October 1859 edition of the Architect’s and Mechanic’s Journal, commenting on the houses built on Beacon in the Back Bay, notes that “the first houses of the new block have been erected from the designs of Mr. Arthur Gilman, architect, and for size, beauty of finish and general elegance of architectural style, they are not exceeded by any in the country.” And a May 15, 1863, article in the Boston Evening Transcript lists them among four houses designed by Arthur Gilman “in the early stages of the improvements upon the Back Bay and Mill Dam territories.”

Charles Fessenden purchased the land for 102 Beacon on January 1, 1855, from the Boston and Roxbury Mill Corporation. The lot originally had a frontage of 30 feet. On the same day, George O. Hovey acquired the lot to the east, at the corner of Beacon and Otter Street (later Embankment Road and then David G. Mugar Way). Otter Street had not yet been built, and in May of 1855 the Boston and Roxbury Mill Corporation sold a lot with a 10 foot frontage to the east of where the street was planned to go so that William Walter Goddard could construct a stable behind his house at 99 Beacon. To accommodate Otter Street, on May 24, 1855, George Hovey sold the eastern ten feet of his lot back to the Boston and Roxbury Mill Corporation, Charles Fessenden sold the eastern ten feet of his lot to George Hovey, and the corporation sold Charles Fessenden a lot with a thirteen foot frontage to the west of his lot, increasing his lot from thirty to thirty-three feet.

Click here for an index to the deeds for 102 Beacon, and click here for further information on the land on the north side of Beacon, including the Storrow Memorial Embankment on the Esplanade.

On December 1, 1856, after the houses were built, Charles Fessenden and George Hovey entered into an agreement to clarify their rights with respect to the shared portico, coal bin located under the front steps, cesspool, and drainage.

On March 20, 1857, 102 Beacon was purchased from Charles H. Mills, William Perkins, and Jacob C. Rogers, assignees of Charles Fessenden, by Henry Parkman Sturgis. He and his wife, Elizabeth Orne (Paine) Sturgis, made it their home. George R. R. Sturgis, Henry Sturgis’s son by his first marriage (to Mary Howard), lived with them until his death in 1865.

Henry and Elizabeth Sturgis continued to live at 102 Beacon in 1868.

March of 1868, Henry Sturgis offered 102 Beacon for sale through real estate dealer John Jeffries, Jr., whose advertisement in the Boston Journal indicated that it had been built “under the immediate superintendence of Mr. Harmon,” presumably Ivory Harmon of the firm of I. and H. M. Harmon, masons.  The advertisement also noted that “the finish in the first story is of rosewood, the ceilings lofty, and the rooms throughout the house large,” and that it would be sold “at a low price, compared to the value, the owner being about to sail for Europe.”

Henry and Elizabeth Sturgis subsequently traveled to Europe.  He died in December of 1869 in London.

On June 23, 1868, 102 Beacon was acquired from Henry Sturgis by shoe manufacturer Joseph Whitney and his wife, Elizabeth (Pratt) Whitney.

Joseph Whitney died in September of 1869, and on October 11, 1869, she elected to have 102 Beacon owned by their son, Henry Austin Whitney, as trustee under Joseph Whitney’s will. She continued to live at 102 Beacon until her death in January of 1890.

On the same day, 102 Beacon was acquired from Marian Hovey by Dr. Joseph Oliver. In the deed, Marian Hovey added a series of conditions restricting any change the building or its use during her lifetime that would “diminish the comfort of occupants of the adjoining estate No. 100 Beacon Street.” 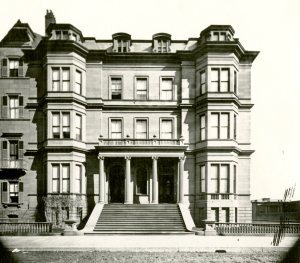 Joseph Oliver was a physician and Harvard Medical School lecturer on children’s diseases.  He also maintained his medical office at 102 Beacon.

Dr. Oliver was separated from his wife, Grace Atkinson (Little) Ellis Oliver, who lived with her father, James Lovell Little, at 2 Commonwealth and then in Salem.  She was an author and biographer, and at the time of her death in May of 1899, served as a member of the Salem School Committee.

By 1894, Dr. William Lothrop Edwards, also a physician, had joined Dr. Oliver at 102 Beacon.  Dr. Edwards married in June of 1897 to Alice Loring.  After their marriage, they lived in an apartment at The Grosvenor at 259 Beacon, and he continued to maintain his office at 102 Beacon with Dr. Oliver.

In about 1900, William and Alice Edwards moved to 102 Beacon to live with Dr. Oliver.

Joseph Oliver died in September of 1903 while traveling in Paris with William and Alice Edwards.  The Edwardses moved thereafter to 125 Beacon.

During the 1903-1904 winter season, 102 Beacon was the home of Ogden Codman and his wife, Sarah Fletcher (Bradlee) Codman. Their usual residence was in Lincoln, where he died in October of 1904.

During the 1904-1905 winter season, it was the home of retired cotton manufacturer Moses Brown Lockwood Bradford and his wife, Florence (Hoar) Bradford.  They previously had lived at 441 Beacon.  They also maintained a home in Concord. By the next season, they had moved to 80 Bay State Road.

On January 17, 1906, 102 Beacon was acquired from the estate of Joseph Oliver by Samuel Eliot Guild. He and his wife, Jessie Rodman (Motley) Guild, made it their home. They previously had lived at 161 Beacon. They also maintained a home in Nahant.

On February 17, 1922, Samuel Guild transferred the property into his wife’s name.

Jessie Guild continued to live at 102 Beacon until about 1937, when she moved to an apartment at 282 Beacon.

On July 1, 1937, 102 Beacon was acquired from Jessie Guild by Katherine Kelly. She was a secretary in the Brookline offices of real estate dealer William Walter Taff, Jr. He and his widowed mother, Agnes Celia (O’Riorden) Taff, owned and lived at 100 Beacon.

In February of 1938, Katherine Kelly applied for (and subsequently received) permission to significantly remodel 102 Beacon, changing it from a single-family dwelling into an apartment house with 18 units. The remodeling – designed by Herman L. Feer — included a new front façade, new stairs, and an exterior addition and “piazza” at the rear.  Plans for the remodeling — including a front elevation, floor plans, framing plans, and a foundation plan — are included in the City of Boston Blueprints Collection in the Boston City Archives (reference BIN R-7).

On May 21, 1938, the remodeled building was acquired from Katherine Kelly by 102 Beacon Street, Inc., of which William Taff was president.

Among the first residents of the newly remodeled building were Meyer Lansky and his wife, Anna (Citron) Lansky. Their three children – Bernard (Buddy) Irving Lansky, Paul Lansky, and Sandra Lansky – lived with them.  They previously had lived at 100 Beacon, where they had moved from New York City in abut 1937 to obtain medical treatment for Buddy Lansky. They continued to live at 102 Beacon until about 1941, when they moved back to New York City.

In September of 1942, 102 Beacon Street, Inc., acquired 104 Beacon, and in August of 1948, 106 Beacon was acquired by William Taff’s brother-in-law, Edward Richardson Mitton, the president of Jordan Marsh department stores, who was married to Marie Frances (Taff) Mitton.

Among the residents at 102 Beacon from about 1945 was Mary (Curley) Donnelly, the daughter of former Governor and Mayor James M. Curley and the former wife of Edward Calvin Donnelly, Jr., chief executive of John Donnelly & Sons, outdoor advertisers. She previously had lived at The Colonial at 382 Commonwealth. She died at 102 Beacon on February 11, 1950, and her brother, Leo, died in her apartment at 102 Beacon the next day.

In December of 1964, Fisher College applied for (and subsequently received) permission to convert the building from an 18 unit apartment house into a dormitory. 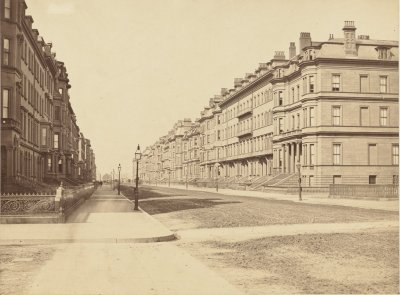