114 Beacon is located on the north side of Beacon, between Arlington and Berkeley, with 112 Beacon to the east and 116 Beacon to the west.

Bainbridge Bunting’s Houses of Boston’s Back Bay does not attribute 104-116 Beacon to a specific architect.  However, in his Building Victorian Boston: The Architecture of Gridley J. F. Bryant, Roger Reed indicates that they were designed by Gridley J. F. Bryant.

114 Beacon was built as the home of Dr. Robert William Hooper, a physician. He was a widower. He previously had lived at 44 Summer. His brother, Nathaniel Hooper, lived at 112 Beacon. 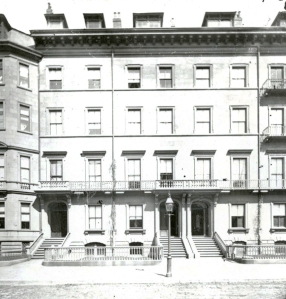 Robert Hooper purchased the land for 114 Beacon on June 28, 1855, from the Boston and Roxbury Mill Corporation. As part of the purchase, he obtained a deed condition prohibiting any owner of the lot at 116 Beacon from building any structure in the rear of 116 Beacon that extended any further north than the north wall of 114 Beacon or was larger in dimensions than any structure in the rear yard of 114 Beacon, unless permission was granted by the owner of 114 Beacon. This restriction subsequently was superseded by an agreement on October 20, 1926, among the owners of all of the houses at 104-116 Beacon limiting rear additions for a period of fifteen years.

Click here for an index to the deeds for 114 Beacon, and click here for further information on the land on the north side of Beacon, including the Storrow Memorial Embankment on the Esplanade.

On June 13, 1885, 114 Beacon was purchased from Robert Hooper’s estate by John Templeman Coolidge, III. He and his wife, Catherine (Parkman) Coolidge., made it their home  They previously had lived in Paris, having returned in May of 1885, and before that, in 1880, had lived at 108 Beacon with his mother, Mary Louisa (Coolidge) Coolidge, the former wife of Joseph Swett Coolidge, and her parents, John Templeman and Louisa (Tilden) Coolidge.

John Coolidge was an artist and antiquarian.  After acquiring 114 Beacon, he built his studio in the house.

In 1886, he purchased as a second home the Governor Wentworth estate in Newcastle (Portsmouth), New Hampshire, originally the home of Colonial Governor Benning Wentworth.

On July 23, 1915, 114 Beacon was acquired from John T. Coolidge by Alice (Crowninshield) Bradlee, the widow of Josiah Bradlee, who lived at 112 Beacon.

On February 4, 1916, 114 Beacon was acquired from Alice Bradlee by Alice Putnam (Bacon) Lothrop, the widow of banker William Sturgis Hooper Lothrop. As part of the transaction, Alice Bradlee added a deed condition restricting the erection of any structure in the rear yard of 114 Beacon that was larger in dimensions than any structure in the rear yard of 112 Beacon. As with the similar restriction on rear yard additions at 116 Beacon, this was superseded by an agreement on October 20, 1926, among the owners of all of the houses at 104-116 Beacon limiting rear additions for a period of fifteen years.

Alice Lothrop lived at 114 Beacon with her son, Francis Bacon Lothrop. They previously had lived in an apartment at Haddon Hall at 282 Berkeley (29 Commonwealth).

Francis B. Lothrop continued to live at 114 Beacon until his marriage in April of 1922 to Eleanor Abbott. After their marriage, they moved to 12 Fairfield.

Alice Lothrop continued to live at 114 Beacon until about 1939, when she moved to an apartment at 100 Beacon.

On May 22, 1939, 114 Beacon was acquired from Alice Lothrop by Charles H. Bucek of Watertown. He was proprietor of the Oriental Tea & Coffee Company and president of the Foster Lunch Company

On August 12, 1940, the Franklin Savings Bank for the City of Boston foreclosed on its mortgage to Charles Bucek and took possession of the property.

On October 31, 1940, 114 Beacon was acquired from the Franklin Savings Bank by Jonas Edward (Edward Johan) Olsson, a machinist, and his wife, Johanna K. (Johanson) Olsson. They lived and operated a lodging house at 119 Beacon, and she also was temporarily managing a third lodging house at 103 Beacon.

The Olssons operated 114 Beacon as a lodging house. They continued to live at 119 Beacon in 1947, but moved soon thereafter to Onset, and by 1950 had moved to 114 Beacon. Jonas Olsson died in January of 1951. Johanna Olsson moved thereafter to Barnstable.