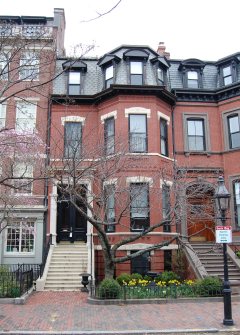 Click here for an index to the deeds for 105 Marlborough, and click here for further information about the land between the north side of Marlborough and Alley 419, from Clarendon to Dartmouth.

On November 14, 1870, Charles Kirby filed a Notice of Intention with the Board of Aldermen to build at 105-107-109 Marlborough. Construction started soon thereafter.

On September 16, 1871, 105 Marlborough was purchased from Charles Kirby by Oliver White Peabody. He and his wife, Mary Ann (Lothrop) Peabody, made it their home. They previously had lived at 249 Berkeley. They also maintained a home in Milton.

Oliver Peabody was co-founder of the investment banking firm of Kidder, Peabody & Company.

From about 1879, the Peabodys made their home in Milton. 105 Marlborough was not listed in the 1879 Blue Book.

During the 1879-1880 winter season, it was the home of merchant and ship owner George Bruce Upton, Jr. and his wife, Geraldine Ipolite (Russell) Rivers Upton. They previously had lived at 79 Beacon. By the 1880-1881 winter season, they had moved to 175 Marlborough.

They continued to live there during the 1885-1886 winter season, but moved thereafter to 25 Commonwealth, next door to Mary Ann Peabody’s brother, Thornton K. Lothrop, who lived at 27 Commonwealth.

On December 17, 1885, 105 Marlborough was purchased from Oliver Peabody by Miss Eliza Goodwin. Her mother, Lucy Ann Newell (Chapman) Goodwin, the widow of Ozias Goodwin (a shipping merchant in the Calcutta trade), lived with her. They previously had lived at 29 Mt. Vernon.

Lucy Goodwin died in April of 1887. Eliza Goodwin continued to live at 105 Marlborough until her death in September of 1906. 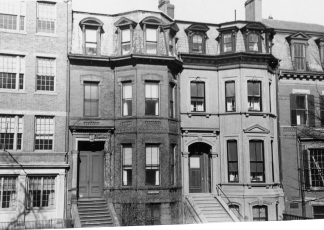 On December 19, 1906, 105 Marlborough was purchased from Eliza Goodwin’s estate by Emily Augusta (Eustis) Jeffries, the widow of Dr. John Amory Jeffries, a physician. She had lived at 413 Beacon during the previous season. She also maintained a home in Readville in the Hyde Park neighborhood of Boston.

By the 1915-1916 winter season, Emily Jeffries was living at 105 Marlborough once again.  Her son, John Temple Lloyd Jeffries, lived with her while attending Harvard Law School.  They continued to live there during the 1916-1917 season, but moved thereafter.

During the 1917-1918 winter season, 105 Marlborough was the home of William Francis Warden and his wife, Eleanor Cotton (Denham) Warden.  They had lived at the Hotel Vendome during the previous season.   He was an artist and, prior to the outbreak of World War I, they had lived in Paris for a number of years.  By the 1918-1919 season, they had moved to 263 Beacon.

By 1920, 105 Marlborough was the home of Samuel Grant Shartle, and his wife, Marion Carter (Chapman) Shartle.  He was an Army officer and had served as military attaché in Berlin from 1909 to 1912.

By 1921, 105 Marlborough had been leased from Emily Jeffries by Miss Frances Lee.

Frances Lee was a graduate of Radcliffe College, the daughter of theologian and educator James Hattrick Lee, and the granddaughter of William Augustus Stearns, president of Amherst College.

She had founded Miss Lee’s School in 1912 and in January of 1916 she had purchased 107 Marlborough, razed it, and built a new building, where she lived and operated Miss Lee’s School (later The Lee School).  It was a day school that provided college preparatory and general courses for girls, and also prepared boys for secondary school.

On September 8, 1926, Frances Lee acquired 105 Marlborough from Emily Jeffries; that same month, she transferred the property to The Lee School, Inc.

In 1937, the Lee School closed due to financial difficulties. On June 29, 1937, the Suffolk Savings Bank for Seamen foreclosed on its mortgages on 105-107 Marlborough and took possession of the property. Frances Lee moved and became the national supervisor of leader training for the Girl Scouts of America.

On September 16, 1937, the Mary Brooks School acquired 105 and 107 Marlborough from the Suffolk Savings Bank for Seamen.  The Mary Brooks School specialized in training medical lab technicians and secretaries, and teaching other para-medical skills.  It previously had been located at 132 Newbury.

105 Marlborough is not listed in the City Directories for 1939-1943, nor in the Boston Lists of Residents.

By 1944, 105 Marlborough was the home of George Francis Brennen and his wife, Jane Elizabeth (Brooks) Brennen.   Jane Brennen (who kept the name Jane Brooks in her profession) was the founder, president, and treasurer of the Mary Brooks School and George Brennen was the corporate clerk and business manager.   Jane Brennen died in February of 1951; George Brennen moved soon thereafter.

By 1953, 105 Marlborough was the home of Henry (Harry) Joseph O’Meara and his wife, Mildred Marie (O’Brien) O’Meara.  They previously had lived in Osterville and, before that, at 225 Commonwealth.  Henry O’Meara was a real estate dealer and former business associate of Joseph P. Kennedy (not long after graduating from Harvard in 1912, Joseph Kennedy had invested in Harry O’Meara’s company and served briefly as its treasurer).  They continued to live at 105 Marlborough in 1955, but moved soon thereafter.

In July of 1956, Jane (Brooks) Brennen’s sister, Sallie Ann Brooks, requested that the Building Department inspect the adequacy of the fire escapes at 107 Marlborough to determine whether it would be satisfactory if the school expands into “the next building.”  By 1957, 105 Marlborough was called the “Jane Brooks House,” a dormitory for the school.  It remained the Jane Brooks House in 1967.

By 1970, 105 Marlborough had become the East-West Yoga School, and in 1973 it was shown as vacant in the City Directory. The Mary Brooks School continued to operate at 107 Marlborough.

On August 8, 1975, 105 Marlborough was acquired from Sallie Ann Brooks by Herbert Friedman and his wife, Harriet Marcia (Katz) Friedman. That same month, they applied for (and subsequently received) permission to repair fire damage to the second and third floor, and to convert the building into three apartments.

On September 2, 1977. 105 Marlborough was purchased from the Friedmans by Donald M. Allen.

On January 14. 1983, it converted the property into three condominium units, the 105 Marlborough Street Condominium.