13 Marlborough was designed by architect Charles K. Kirby and built in 1863, one of four contiguous houses (9-11-13-15 Marlborough).  The four houses form two pairs of mirror opposite buildings (9-11 Marlborough and 13-15 Marlborough); each pair with a single entrance porch creating a symmetrical entryway.

9-11-13-15 Marlborough were built on what were originally three lots, each with a 25 foot frontage. Charles Kirby bought the middle lot on February 24, 1863, from attorney Elias Gilbert Merwin, and the other two lots on March 9, 1863, from attorney George Otis Shattuck. He then subdivided them into three 19 foot lots and one 18 foot lot (for 15 Marlborough). The land was part of a larger parcel originally purchased from the Commonwealth of Massachusetts on November 6, 1858, by George Goss. He and his partner, Norman Carmine Munson, were the contractors responsible for filling the Commonwealth’s Back Bay lands.

Click here for an index to the deeds for 13 Marlborough, and click here for further information about the land on the north side of Marlborough from Arlington to Berkeley, south of Alley 421.

On April 30, 1864, 13 Marlborough was purchased from Charles K. Kirby by Elijah Dana Brigham as trustee for his sister, Maria D. (Brigham) Peabody Furber, the widow of Rev. David Peabody and the wife of Rev. Daniel Little Furber. Daniel and Maria Furber lived in Newton, where he was pastor of the First Congregational Church.

Elijah Brigham was a merchant, first in the firm of Chandler, Howard & Co., and then in his own firm, E. D. Brigham & Co., which failed in 1857. At the outset of the Civil War he was named by Governor John Andrew as Commissary-General of Massachusetts, with the rank of Colonel. In 1863, he also was treasurer of the St. Mary’s Canal Mineral Land Company, formed to develop copper mines in Michigan.

On September 1, 1864, 13 Marlborough was purchased from Elijah Brigham by woolens importer and dry goods merchant Edwin Oramal Tufts. He and his wife, Ruth Bradstreet (Foster) Tufts, made it their home. They previously had lived at 4 Derne. They continued to live at 13 Marlborough in 1871, but moved thereafter.

On October 31, 1872, 13 Marlborough was purchased from Edwin Tufts by wool merchant and banker Henry Augustus Rice. He and his wife, Agnes Lee (Cushing) Rice, made it their home. They also maintained a home, Bay Bank, in Newport.

Henry Rice died in December of 1898. Agnes Rice continued to live at 13 Marlborough until her death in June of 1909.

On October 11, 1909, 13 Marlborough was purchased from the estate of Henry Rice by Caroline Miller (Bigelow) Amory, widow of George Washington Amory, a cotton buyer. Their daughter, Caroline, lived with her. They previously had lived at 361 Beacon.

Caroline Amory continued to live at 13 Marlborough with her daughter until her death in 1921.  After her death, her daughter moved to 101 Chestnut.

On October 28, 1921, 13 Marlborough was purchased from the estate of Caroline (Bigelow) Amory by banker Jonathan Stone Raymond. He and his wife, Pauline (Pollard) Raymond, made it their home. They previously had lived at 267 Beacon. They also maintained a home at Eastern Point in Gloucester.

On May 15, 1929, 13 Marlborough was purchased from Jonathan Raymond by Merrill Griswold. He and his wife, Lillian (Lowell) Griswold, made it their home. They previously had lived at 101 Chestnut.

Merrill Griswold was lawyer and financier. He was a founder of the Massachusetts Investors Trust in the mid-1920s, and of the American Research and Development Corporation in 1946.

The Griswolds continued to live at 13 Marlborough in 1931, but in 1932 were living elsewhere and 13 Marlborough was the home of lumber dealer Roger Wilson Cutler and his wife, Edith Callender (Cryder) Ames Cutler. They had married in May of 1931 (she was the widow of Frederick Lothrop Ames II, who had died in June of 1921). They also maintained a home in Newport.

By 1933, the Cutlers had moved to an apartment at 6 Arlington and the Griswolds were once again living at 13 Marlborough.

In November of 1953, Grace Dawes filed for (and subsequently received) permission to convert 13 Marlborough from a single-family dwelling into a lodging house.

On May 1, 1957, 13 Marlborough was acquired from Grace B. Dawes by Pollyann Elizabeth (Tillinghast) Frost, the former wife of Burton Willis Frost, Jr., as trustee of the Pollyann Realty Trust. She acquired 211 Beacon and 256 Commonwealth from Grace Dawes at the same time, and operated all three as lodging houses. She lived in an apartment at 29 Fairfield and then, from 1961, at 1 Exeter.

On January 16, 1942, 13 Marlborough was acquired from Pollyann T. Frost by the Wendell Realty Corporation (Herbert Levin, president). It acquired 256 Commonwealth from her on the same day. 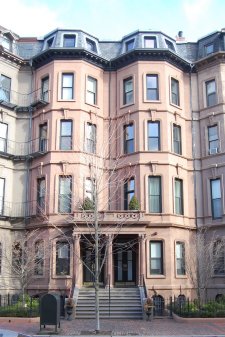 On April 8, 1965, 13 Marlborough was acquired from the Wendell Realty Corporation by Robert Gross and his wife, Dorothy B. Gross. They purchased 256 Commonwealth at the same time. The Grosses lived in Brookline and continued to operate both properties as lodging houses.

On October 23, 1978, 13 Marlborough was acquired from Robert and Dorothy Gross by real estate dealer Charles C. Patsos, trustee of the Marlboro Associated Trust. He had purchased 256 Commonwealth from them the month before.

In February of 1979, Charles Patsos acquired 15 Marlborough, and in August of 1995, he filed for (and subsequently received) permission to convert 13 Marlborough and 15 Marlborough into twelve apartments each.

On June 5, 2002, 13-15 Marlborough were purchased from Charles Patsos by the Marlborough Street Acquisition 2002 LLC (Sean P. McGrath, manager). In April of 2003, it filed for (and subsequently received) permission to combine the two houses into one property and remodel the combined property into six apartments.