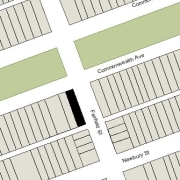 The original house at 29 Fairfield (244 Commonwealth) was designed by William Whitney Lewis, architect, and built in 1876-1877 by William H. Sayward, mason, for banker and real estate investor Asa Perkins Potter and his wife, Delle (Sheldon) Potter. He is shown as the owner on the original building permit application, dated November 11, 1876, and on the final building inspection report, dated November 9, 1877. As originally designed, the entrance was on Commonwealth Avenue with the address of 244 Commonwealth. In 1877-1878, a two horse stable was added at the rear of the house, also designed by William Whitney Lewis and built by William H. Sayward.

Delle Potter purchased the 26 foot wide lot for 244 Commonwealth (29 Fairfield) on May 31, 1876, from wholesale dry goods merchant George H. Braman. The land was part of a parcel previously owned by Nathan Matthews, part of an even larger tract which was purchased by Nathan Matthews on January 2, 1871, from David Sears, Jr., Frederick R. Sears, and Knyvet Sears.

Click here for an index to the deeds for 29 Fairfield, and click here for further information about the land between the south side of Commonwealth and Alley 432, from Fairfield to Gloucester.

By the 1877-1878 winter season, Asa and Delle (Sheldon) Potter had made 244 Commonwealth their home. They previously had lived at 60 Bowdoin. They also maintained a home in Cohasset.

On May 31, 1876, the same day as Delle Potter purchased the corner lot, Asa Potter had purchased the land to the west and south from George Braman, with a 30 foot 6 inch frontage on Commonwealth (west of 29 Fairfield) and a 56 foot six inch frontage on the alley (south of 29 Fairfield) running to Newbury. On October 21, 1878, he entered into an agreement with National Bank of Commerce of Boston to purchase the land on the east side of Fairfield between the alley and Newbury, with a 60 foot frontage on Newbury. In 1877-1879, Asa Potter had two blocks of four houses each built on Fairfield on the land between the alley and Newbury: 31-33-35-37 Fairfield on the west and 32-34-36-38 Fairfield on the east. On June 21, 1879, after 32-38 Fairfield had been built, he purchased and took title to the land from the National Bank of Commerce.

In early 1890, the Potters decided to rebuild 29 Fairfield. On March 1, 1890, the Boston Journal observed that “within a few weeks the residents of Commonwealth avenue will witness the first indication that the avenue has reached the period when re-building will begin. Mr. Asa P. Potter will soon begin the entire reconstruction of his house. The present house will give way to a new house, covering the entire lot, and will provide quite an addition to the ornamental structures of modern date. Mr. Potter was one of the pioneers on the upper portion of the avenue.”

The permit application and final inspection for the re-built house have not been located.

Bainbridge Bunting notes that “although 29 Fairfield was built in 1876, the recessed entrance on Fairfield Street was not added until 1890 when the house was drastically remodeled and the front door was moved from Commonwealth Avenue to Fairfield Street.” The remodeling was designed by William R. Emerson, who is credited as the architect by the American Architect and Building News when it published a photograph of the house in its November of 1892 edition. The builders were James Smith, mason, and Flanagan Brothers, carpenters.

The rebuilt house encompassed the area at the rear, on the alley, previously occupied by the house’s stable. Within the arched recessed entrance on Fairfield Street, the stairs ran north up to the front door, with a small round window at the porch. The front door later was moved to the south side of the recessed entry, the stairs reversed to run south, and the round window relocated to the south of the arch.

On July 26, 1890, the Boston Journal reported that Asa Potter had leased 183 Commonwealth “while his own house is being rebuilt.”

Asa Potter was president and part-owner of the Maverick National Bank of Boston.  In October of 1891, the bank failed and he was indicted on various charges, including violating federal banking laws.  Jonas H. French (of 128 Commonwealth), a director and part owner, and Thomas Dana (of 311 Commonwealth), a bank director, also were indicted. Asa Potter was found guilty in February 1893, and fined $1,000 and sentenced to 60 days in jail. On appeal to the U. S. Supreme Court in December of 1894, the decision was reversed because the court found that Potter had not “willfully” violated the law.

The Potters lived at 183 Commonwealth during the 1890-1891 winter season. By 1892, they had moved to the Longwood neighborhood of Brookline; they subsequently moved to New York City and then to Rye, New York.

On March 22, 1893, the Boston Herald reported on the sale of 29 Fairfield: “When the crash in the affairs of the Maverick Bank came, a house on the southwest corner of Commonwealth avenue and Fairfield street, owned by Mr. Asa P. Potter, was approaching completion. This residence, which has never been occupied, has just been sold by Meredith & Grew to parties whose names are not made known.”

The purchaser was Arthur Astor Carey, who took title to the property on April 3, 1893, 29 Fairfield Delle Potter. He and his wife, Agnes L. M. (Whiteside) Carey, made it their home. During the previous season, they had lived at the Hotel Agassiz at 191 Commonwealth. They also maintained a home, Creek Farm, in Little Harbor, at Sagamore Creek near Portsmouth, New Hampshire.

A great-grandson of John Jacob Astor, Arthur Carey was an amateur artist, archeologist, astronomer, and musician.  In the early 1900s, he became a lay preacher in the New Church and built a non-denominational chapel on his New Hampshire property where he preached during the summer.  He founded a reading room, school, and summer camp for boys and girls in Waltham.

The Careys continued to live at 29 Fairfield in during the 1898-1899 winter season, but were no longer listed there in the 1900 Blue Book. He continued to own the house and lease it to others.

During the 1899-1900 winter season, 29 Fairfield was the home of Urban Hanlon Broughton and his wife, Cara Leland (Rogers) Duff Broughton.  They previously had lived at 520 Commonwealth.

Urban Broughton was a civil engineer.  Originally from England, he had come to the United States in 1887 to consult on the Fairhaven, Massachusetts, sewer system, sponsored by Henry Huddleston Rogers, a principal of Standard Oil.  He subsequently married Henry Rogers’s daughter and remained in the United States until 1912, consulting as a civil engineer and later becoming a mining and railroad company executive.  After returning to England, he served as a Member of Parliament; he died in January of 1929 during the pendency of his elevation to the peerage.  Cara Broughton subsequently was named Lady Fairhaven and his son Baron Fairhaven.

By the 1900-1901 winter season, 29 Fairfield was the home of Charles Hamilton Paine and his wife, Lucy Grundy (Tate) Paine.  They previously had lived at 36 Perrin.  They also maintained a home in Paris.

Charles Paine was a principal in the investment banking firm of Paine, Webber & Company, founded by his brother, William Alfred Paine, and Wallace G. Webber.

Charles Paine died in September of 1909.

By 1912, 29 Fairfield had become Guild & Evans School for Girls, operated by Miss Fannie Carleton Guild and Miss Jeannie (Jennie) Carter Evans.  It was the successor to the Commonwealth Avenue School at 324 Commonwealth, founded by Miss Hannah E. Gilman and Miss Julia R. Gilman, who had retired in about 1910.  Fannie Guild had been co-principal of the school with Julia Gilman.

The school continued to be located at 29 Fairfield in 1914, but had moved to 255 Newbury by 1915 and then to 200 Commonwealth by 1916.  Fannie Guild and Jeannie Evans continued to live at 29 Fairfield until about1919 and may have continued to conduct some school business there, inasmuch as it continued to be listed as a “private school” in the Blue Books through 1920.  By 1920, Fannie Guild had retired to Milford, New Hampshire, where she had been born, and Jeannie Evans had retired to Portland, Maine, also where she had been born.

On February 28, 1922, 29 Fairfield was leased from Arthur Carey by Edward P. Hicks and his wife, Maud L. (Gatchell) Hicks.  They previously had lived in Jamaica Plain.

Edward Hicks was a salesman, and Maud Gatchell Hicks was a teacher at Emerson College of Oratory.  In 1922, she founded the Academy of Speech Arts and operated it at 29 Fairfield.  The Academy taught classes in voice building, dramatic art, oratory, and related subjects.  The Hickses also provided lodging at 29 Fairfield for several of the teachers in the Academy.

Arthur Carey died in June of 1923 and on November 24, 1924, 29 Fairfield was acquired from his estate by Eda Adams (Woolson) Hurlbut. She and her husband, Byron Satterlee Hurlbut, lived in Cambridge, where he was a professor of English at Harvard (where he had served as dean from 1902 through 1916).

The Hickses continued to live and operate the Academy of Speech Arts at 29 Fairfield until mid-1925, but had moved to 208 Commonwealth by 1926. 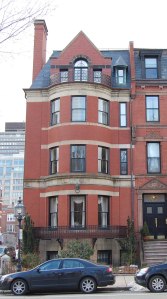 On June 16, 1925, 29 Fairfield was acquired from Eda Hurlbut by The Girls’ Friendly Society, which opened a lodge for members there in the fall of 1925. In a November 20, 1925, article announcing its opening, the Boston Globe indicated that it had “living accommodations for 33 girls … with the lower floor given over to clubrooms for members.”

The Girls’ Friendly Society was an international organization affiliated with the Episcopal Church which provided lodging for unmarried young women.

In September of 1928, it acquired 246 Commonwealth next door.

The Girls’ Friendly Society continued to be located at 29 Fairfield and 246 Commonwealth until about 1942.

On July 23, 1942, 29 Fairfield and 246 Commonwealth were acquired from The Girls’ Friendly Society by Francis J. Dempsey. He was an elevator operator and probably acquired the property on behalf of attorney and real estate investor Maurice Eli Goldberg.

29 Fairfield was shown as vacant in the 1943 City Directory, and as the Mutual Housing Trust (offering “furnished rooms”) in the 1944-1946 City Directories.

On April 26, 1944, Kate Goldberg transferred 29 Fairfield and 246 Commonwealth to real estate dealer Ray C. Johnson, and on September 22, 1944, he transferred both properties to William A. Sargent. In both cases, the property was held on behalf of the Goldberg family.

29 Fairfield remained the property of Maurice Goldberg — one of a number of holdings of the Maurice E. Goldberg Charitable and Educational Trust — until his death in July of 1972.

On July 22, 1976, the trust sold 29 Fairfield to his daughter, Barbara (Goldberg) Weingarden (a resident of St. Louis, Minnesota). At the same time, it also sold her 234 Beacon, and sold her brother, Richard H. Goldberg (a resident of Tuckahoe, New York), 113 Commonwealth, 207 Commonwealth and 246 Commonwealth.

On January 11, 1978, 29 Fairfied was purchased from Barbara Weingarden by Kent T. Damon and Irwin H. Frankel.

The property changed hands and on September 21, 1979, was purchased by Anthony M. Rando, trustee of the 29 Fairfield Trust. In November of 1979, he filed for (and subsequently received) permission to convert the property from twelve apartments into five apartments.

On December 12, 1979, he converted the property into five condominium units, the 29 Fairfield Street Condominium.