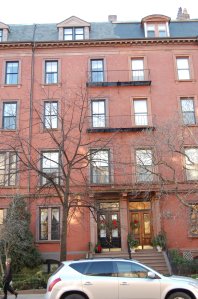 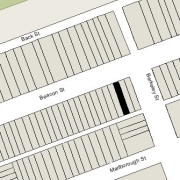 153 Beacon is located on the south side of Beacon, between Berkeley and Clarendon, with 151 Beacon to the east and 155 Beacon to the west.

Click here for an index to the deeds for 153 Beacon, and click here for further information about the land between the south side of Beacon and Alley 420, from Berkeley to Clarendon.

153 Beacon was purchased on July 5, 1860, by a trust created by Charles Jackson for the benefit of his daughter, Lucy Cabot (Jackson) Morse, the wife of cotton manufacturer John Torrey Morse. The Morses made it their home; they previously had lived at 9 Hamilton Place.

John T. Morse, Jr., married in June of 1865 to Fanny Pope Hovey; after their marriage, they lived at 129 Charles and then, by 1869, at 100 Beacon with her parents, George Otis Hovey and Mary Ann Leveley (Cotton) Hovey. John Torrey Morse, Jr., was an attorney and later would become an historian and biographer.

E. Rollins Morse, a banker and stockbroker in partnership with his brother, Charles, married in May of 1873 to Marion Ronaldson Steedman. After their marriage, they lived at 241 Beacon.

Charles Morse withdrew from his partnership with E. Rollins Morse in 1888. An October 7, 1888, “Table Gossip” entry in the Boston Globe noted that he had retired “on account of ill health” and would “go to Europe for an indefinite period.” He subsequently made his home in Pau, France (where he died in February of 1912), but continued to list 153 Beacon as his Boston residence in the City Directories through 1892.

Lucy Morse died in December of 1892. John Torrey Morse continued to live at 153 Beacon until his death in September of 1906.

On January 20, 1907, it was purchased from Lucy Morse’s trust and her estate by architect Richard Clipston Sturgis. He and his wife Esther Mary (Ogden) Sturgis, made it their home.

From about 1917, R. Clipston Sturgis’s nephew, Alanson Hall Sturgis, lived with them.  He previously had lived with his parents, William Codman Sturgis and Carolyn (Hall) Sturgis, at 61 Mt. Vernon and, before that, at 155 Beacon.  Alanson Sturgis was a draftsman in R. Clipston Sturgis’s offices and when his parents moved to New York City, he came to live at 153 Beacon.  He married in June of 1918 to Mary Wharton.  After their marriage, they continued to live at 153 Beacon with R. Clipston and Esther Sturgis, who also maintained a home in Portsmouth, New Hampshire.

Both families continued to live at 153 Beacon during the 1925-1926 winter season, but moved thereafter. By the 1927-1928 season, they both were living in apartments at 261 Beacon.  R. Clipston Sturgis continued to own 153 Beacon and lease it to others. 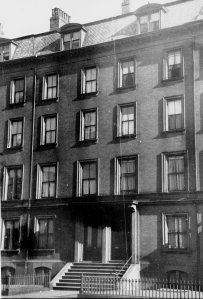 By the 1926-1927 winter season, 153 Beacon was the home of Lucy Sturgis (Codman) Borland, the widow of stockbroker William Gibson Borland, and their daughter, Rosamond. They also maintained a home in Beverly Farms.

In February of 1932, R. Clipson Sturgis wrote the Chairman of the Zoning Adjustment Board, indicating his intention to resume living there in 1933 and asking whether there would be “any objection to my carrying on my profession of architecture in part of the house.”

The Chairman’s answer is not known, but apparently R. Clipston Sturgis decided not to resume living there and, instead, to sell the property.

On August 1, 1932, 153 Beacon was acquired by Mabel W. (Robertson) Gleason, the wife of Walter Howard Gleason. They lived at 183 Beacon until about 1933 and at 188 Beacon from 1934. Walter Gleason was an attorney, real estate dealer, and investment broker.

In August of 1933, Walter Gleason applied for (and subsequently received) permission to install fire escapes, indicating that the building would be used as “lodgings.”

By 1934, 153 Beacon was the home of Miss Gladys F. Churchill, a secretary, who probably managed the lodging house for the Gleasons.  The previous year, she had lived in an apartment at 231 Beacon.  She continued to live at 153 Beacon until about 1942.

On May 29, 1947, 153 Beacon was acquired from Mabel Gleason by Dr. Arthur Joseph Driscoll, Jr., a physician and orthopedic surgeon, who continued to operate it as a lodging house. He lived at 153 Beacon with his parents, Arthur Joseph Driscoll, an egress inspector for the Boston Building Department, and Edith Louise (Robertson) Driscoll. They previously had lived in an apartment at 124 Marlborough.

In May of 1952, Arthur Driscoll applied for (and subsequently received) permission to remodel the building and convert it into eleven apartments.

Arthur and Edith Louise Driscoll continued to live in an apartment at 153 Beacon. She died in 1958, and in he remarried soon thereafter to Doris Buchanan. After their marriage, they lived at 153 Beacon until the early 1960s, when they moved to Needham.

On November 1, 1960, 153 Beacon was acquired from Arthur J. Driscoll by Wainwright J. Wainwright.

On March 31, 1961, 153 Beacon was acquired from Wainwright J. Wainwright by real estate dealer and property manager Robert White. In May of 1961, he also acquired 151 Beacon, also an apartment house with eleven units.

In May of 1961, he applied for (and subsequently received) permission to remove a wooden shed from the rear of the two buildings. He subsequently installed parking for the tenants.

On March 31, 1970, 151 Beacon and 153 Beacon were purchased from Robert White by real estate broker and investor George Demeter. On March 16, 1984, he transferred both properties to himself as trustee of the Demeter Realty Trust.