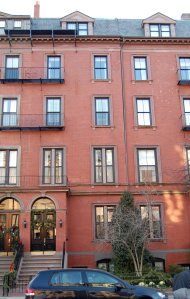 151 Beacon is located on the south side of Beacon, between Berkeley and Clarendon, with 149 Beacon to the east and 153 Beacon to the west.

Click here for an index to the deeds for 151 Beacon, and click here for further information about the land between the south side of Beacon and Alley 420, from Berkeley to Clarendon.

151 Beacon was purchased on July 5, 1860, by Mary Ellen (Parker) Lowell, the wife of retired merchant George Gardner Lowell. They previously had lived at 30 Mt. Vernon.

George Lowell died in February of 1885. Mary Ellen Lowell continued to live at 151 Beacon until her death in April of 1915. In her will, she left 151 Beacon to her daughter-in-law, Cornelia (Baylies) Lowell.

In December of 1915, Alice Putnam (Bacon) Lothrop, the widow of banker William Sturgis Hooper Lothrop, applied to remodel the interior of the house.  She lived in an apartment at Haddon Hall at 29 Commonwealth, and probably had intended to purchase 151 Beacon as her home.  She subsequently abandoned the permit and by late 1916 had purchased and moved to 114 Beacon.

On March 29, 1922, 151 Beacon was acquired from William Stober by attorney John Lothrop Motley. He and his wife, Nancy (Barton) Motley, made it their home. They previously had lived at 7 Marlborough. They also maintained a home in Nahant.

On May 1, 1943, 151 Beacon was acquired from J. Lothrop Motley by Shirley Clifford Speed, a real estate dealer who converted many Back Bay houses into lodging houses and apartments.

In May of 1943, he applied for (and subsequently received) permission to convert the house from a single-family dwelling into a lodging house.

It appears that the lodging house was operated briefly in 1943 by Max Feer, who owned a grocery and variety store, and his wife, Emma (Korb) Wolffers Feer.  In 1942, they had lived and operated a lodging house at 323 Beacon, and were in the process of converting 113 Beacon into a lodging house, where they had moved by 1944.

On August 7, 1946, 151 Beacon was acquired from Alice Lauren by Frances Willard (Hammond) Christian, widow of Dr. Andreas (Andrew) Forest Christian. She lived at 20 Hereford. That same month, she applied for (and subsequently received) permission to convert 151 Beacon into eleven apartments.

The property subsequently changed hands and on May 1, 1961, was acquired by real estate dealer and property manager Robert White. In March of 1961, he had acquired 153 Beacon, also an apartment house with eleven units.

In May of 1961, he applied for (and subsequently received) permission to remove a wooden shed from the rear of the two buildings. He subsequently installed parking for the tenants.

On March 31, 1970, 151 Beacon and 153 Beacon were purchased from Robert White by real estate broker and investor George Demeter. On March 16, 1984, he transferred both properties to himself as trustee of the Demeter Realty Trust.