171 Commonwealth was designed by Snell and Gregerson, architects, and built in 1879 by Webster & Dixon, builders, as the home of Augustus Lowell and his wife, Katharine Bigelow (Lawrence) Lowell. Augustus Lowell is shown as the owner on the original building permit application, dated June 25, 1879.

171 Commonwealth was built on the eastern portion of a larger parcel that Augustus Lowell purchased on May 9, 1879, from the Commonwealth of Massachusetts. He sold the western portion in September of 1879 to Roger Wolcott, who had 173 Commonwealth built as his home.

Click here for an index to the deeds for 171 Commonwealth, and click here for further information about the land between the north side of Commonwealth and Alley 425, from Dartmouth to Exeter.

By the 1880-1881 winter season, Augustus and Katharine (Lawrence) Lowell had made 171 Commonwealth their home. They previously had lived at 97 Beacon.  They also maintained a home, Sevenels, in Brookline.

Augustus Lowell was treasurer of the Boott Cotton Mills in Lowell and a director of several other textile mill companies.

Four of the Lowell’s five surviving children lived with them: Percival, Katharine, Elizabeth, and Amy Lowell.  Their fifth surviving child, Abbott Lawrence Lowell, had married in June of 1879 to Anna Parker Lowell; they lived at 73 Marlborough. A. Lawrence Lowell was an attorney and later would become President of Harvard University.

Katharine Lowell married in December of 1882 to Alfred Roosevelt, a banker in New York City, where they lived after their marriage. He died in July of 1891.  By the 1895-1896 winter season, she had moved back to Boston and was living at 167 Commonwealth.

Percival Lowell worked with his father’s cotton manufacturing companies until 1883. He then traveled to Japan and Korea, and subsequently authored of several works on the Orient.  In the 1890s, he took up the study of astronomy and in 1894 founded the Lowell Observatory in Flagstaff, Arizona, where he conducted extensive research on Mars and other planets. He married in June of 1908 to Constance Savage Keith. He died in November of 1916 in Flagstaff, and in April of 1917 his estate purchased 180 Beacon, which became his widow’s Boston home.

Elizabeth Lowell married in June of 1888 to William Lowell Putnam, an attorney.  After their marriage, they lived at 67 Marlborough.

Augustus Lowell continued to live at 171 Commonwealth and in Brookline with their daughter, Amy. He died in June of 1900.

After his death, Amy Lowell purchased the Brookline residence from his estate and made it her home. She subsequently became a noted poet. Her siblings all had their own residences and 171 Commonwealth was offered for sale.

On February 3, 1901, Boston Globe’s “Table Gossip” commented that the house “has one of the most attractive interiors of any house on the avenue. The hall is surrounded by a gallery and the drawing rooms are very spacious. In former days, during the lifetime of Mrs. Lowell, 500 guests have been entertained at once, without crowding.”

On February 25, 1901, 171 Commonwealth was purchased from Augustus Lowell’s estate by Susan Greene (Amory) Dexter, the estranged wife of shipping merchant and railroad investor Franklin Gordon Dexter. During the 1900-1901 winter season, she had lived at 456 Beacon.

F. Gordon Dexter died in January of 1903.  In his will, he left her an annual income of $10,000. He his estate in trust for his two surviving sons and their male heirs, specifying that: “I have made the distinction in this will between male and female descendants because I would avoid the chance of any descendant of mine bearing my respectable name coming to absolute want, and because the thought of my whole property perhaps coming into the possession of a single female inheritor, and she becoming the wife of one of the modern fortune hunters, a class for whom I have small respect, is distasteful to me.”

Susan Dexter continued to live at 171 Commonwealth until her death in September of 1924.

On June 1, 1925, 171 Commonwealth was purchased from Susan Greene Dexter’s estate by John Gardner Coolidge. He and his wife, Helen Granger (Stevens) Coolidge, made it their home. They previously had lived at 55 Commonwealth.  They also maintained a home in North Andover.

John Coolidge retired in 1908 from the US Diplomatic Corps, having served in France, China, Mexico, and Nicaragua.  In 1914, he was appointed a special agent at the American Embassy in France, where he served until 1917. In 1918, he served as a special assistant at the State Department in Washington DC.

John Coolidge died in February of 1936.  Helen Coolidge continued to live at 171 Commonwealth until her death in April of 1962. 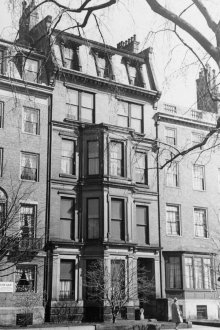 In her will, Helen Coolidge left 171 Commonwealth to the Trustees of Public Reservations or, if they declined, to the Society for the Preservation of New England Antiquities (later renamed Historic New England).  She also left $150,000 for maintenance of the properties.  Both organizations declined the bequest.

On June 21, 1965, 171 Commonwealth was purchased from Helen Coolidge’s estate by Nick Haddad, trustee of the Haddad Realty Trust.

In October of 1965, he filed for (and subsequently received) permission to convert the property from a single-family dwelling into apartments (the permit application was for eight apartments but was changed to twelve; the Building Department synopsis remained at eight apartments).

It appears that the remodeling may not have been done in conformance with the building code.

On May 15, 1968, the building was severely damaged by a fire which injured three residents.  In November of 1968, Nick Haddad filed for permission to repair the fire damage and legalize the occupancy as twelve units.  The application was denied because it failed to designate a registered architect and appeared to vastly underestimate the cost of the repairs.  He submitted a revised permit application, which was approved.

The building suffered another, smaller fire in 1971, and was the subject of numerous violations issued by the Building Department.

In October of 1998, Marrano/Marc Equity (presumably on behalf of the 171 Commonwealth Avenue Limited Partnership)  filed for (and subsequently received) permission to reduce the number of units from twelve to three.

On October 26, 1999, the 171 Commonwealth Avenue Limited Partnership converted the property into three condominium units, the 171 Commonwealth Condominium. In December of 1999, it filed for (and subsequently received) permission to reduce the number of units from three to two, and on January 15, 2000, it amended the Condominium Master Deed to reflect the reduced number of units.

The two units subsequently changed hands, and in September of 2020, both units were acquired by David J. Murphy as trustee of the 171 Commonwealth II Nominee Trust. In April of 2019, in anticipation of acquiring the units, the Trust received permission to remodel the building and convert it back into a single-family dwelling.

171 Commonwealth was assessed as a single-family dwelling in 2021.