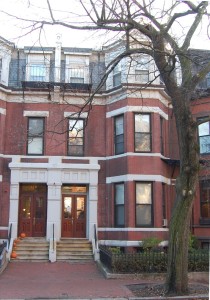 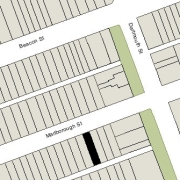 The six houses were built on two parcels of land, with a combined frontage of 150 feet, originally sold by the Commonwealth of Massachusetts at its public sale on April 10, 1869. The successful bidder at the auction was building contractor George Wheatland, Jr., who subsequently sold or transferred his right to purchase the land, probably under an agreement with Eben D. Jordan under which he oversaw construction of the houses. Eben Jordan took title to the land from the Commonwealth after the houses were built: a 100 foot wide parcel running west from Dartmouth on October 19, 1875, and a 50 foot wide parcel to the west of the first parcel on February 21, 1877.

Click here for an index to the deeds for 172 Marlborough, and click here for further information about the land between the south side of Marlborough and Alley 425, from Dartmouth to Exeter.

On June 14, 1876, 172 Marlborough was acquired from Eben D. Jordan by his son, James Clark Jordan. He and his wife, Helen Lincoln (Stevens) Jordan, made it their home. They previously had lived at 76 Chestnut.  On June 15, 1876, James Jordan transferred the property back to his father as trustee for the benefit of Helen Jordan.

James Jordan was a member of his father’s dry goods firm. 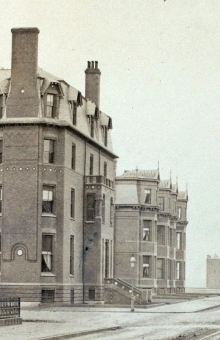 164-172 Marlborough (ca. 1875), detail from a photograph of the south side of Marlborough, looking west; courtesy of Historic New England

By the 1886-1887 winter season, 172 Marlborough was the home of Dr. Thomas Waterman, a physician, and his wife, Harriet Henchman (Howard) Waterman. They previously had lived at 146 Boylston, where he also maintained his medical offices. They continued to live at 172 Marlborough during the 1887-1888 season, but moved thereafter to 68 St. James.

By May of 1887, 172 Marlborough also was the home of William Henry Rideing and his wife, Margaret E. (Bockus) Rideing. They had married in March of 1887, and 172 Marlborough was their first home together. He was associate editor of the Youth’s Companion magazine and later would author several books. They continued to live there until about 1888, when they moved to Brookline.

During the 1892-1893 winter season, Helen Jordan was traveling abroad, and 172 Marlborough was the home of  John Emory Tippett and his wife, Clara (Bentler) Tippett.  They previously had lived at 185 West Chester Park.  He was Superintendent of the Boston Art Club at 270 Dartmouth. By the 1893-1894 season, the Tippetts had moved to the Hotel Huntington (Huntington at Blagden) and 172 Marlborough was once again Helen Jordan’s home.

Helen Jordan’s daughter, Helen, married in June of 1906 to Alfred Talbot Baker, a bond broker.  After their marriage, they lived in Concord. They subsequently divorced and Helen (Jordan) Baker and her son, Alfred Talbot Baker, Jr., were living with her mother and sister at 172 Marlborough by the 1908-1909 winter season. She continued to live with them during the 1909-1910 winter season.

Marion Baker married in February of 1913 to William F. Bentinck-Smith. After their marriage, they also lived in an apartment at 220 Marlborough.

Helen Jordan continued to live at 172 Marlborough during the 1919-1920 winter season.

During the 1920-1921 winter season, 172 Marlborough was the home of MacGregor Jenkins and his wife, Alice B. (Duncan) Jenkins. They also maintained a home in Dover.

MacGregor Jenkins had been associated with Houghton, Mifflin as business manager of the Atlantic Monthly from 1890.  In 1908, when Houghton, Mifflin ceased publishing the magazine, he was one of the organizers of The Atlantic Monthly Company, which continued its publication.  He served as treasurer of the company until his retirement in 1928.  He also was the author of numerous books and articles. 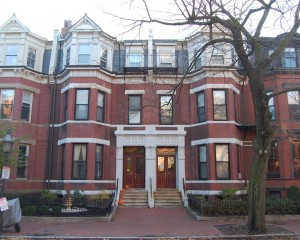 On April 10, 1925, 172 Marlborough was purchased from Helen Jordan’s trust by Christine J. (Murdock) Manahan, the wife of Ernest Manahan. They also maintained a home on Little’s Point in Swampscott.

On October 14, 1935, the Massachusetts Hospital Life Insurance Company foreclosed on its mortgage to Christine Manahan and took possession of 172 Marlborough.

172 Marlborough was shown as vacant in the 1936 Boston Directory.

In July of 1937, Massachusetts Hospital Life Insurance applied for (and subsequently received) permission to convert the property from a single-family dwelling into a lodging house.

Conrad Zeverin Granath and his wife, Myrtle H. (Fredenburgh) Granath, lived at 172 Marlborough from 1937 and probably were the operators of the lodging house.  They previously had lived at 50 Gloucester.  He was an embalmer and later would become director of a funeral home in Medford.  They continued to live at 172 Marlborough in 1939, but had moved to Brookline by 1940.

On June 26, 1941, 172 Marlborough was acquired from Massachusetts Hospital Life Insurance by Harriett Elizabeth (Burns) Brown, the wife of Everett Alonzo Brown, who operated it as a lodging house. She previously had lived at 295 Newbury, where she also had operated a lodging house, and many of her lodgers moved with her to 172 Marlborough. She was living apart from her husband, a former telegraph operator who lived in Franklin; he died in September of 1947.

On March 30, 1948, 172 Marlborough was purchased from Harriett Brown by Ingrid S. Hanson. She previously had been a lodger at 114 Beacon.

On May 16, 1957, 172 Marlborough was acquired from Ingrid Hanson by Maria Margarete de Lozano, the wife of Dr. Armando de Lozano, a pathologist. They lived in Jamaica Plain. 172 Marlborough continued to be operated as a lodging house.

On April 16, 1962, 172 Marlborough was acquired from Maria Margarete de Lozano by Beatrice H. Pattenden and Octavia Morley (Sawyer) Walsh, the widow of Edward M. Walsh. Beatrice Pattenden lived at 172 Marlborough and operated it as a lodging house. Octavia Walsh lived at 191 Beacon. She owned the Walsh Sprinkler Company, dealers in automatic sprinkler systems.

On September 16, 1963, 172 Marlborough was acquired from Beatrice Pattenden and Octavia Walsh by real estate dealer George P. Demeter. On February 1, 1996, he transferred the property to the Yia Yia Realty Limited Partnership (the general partner of which was one of George Demeter’s affiliated companies); and on January 2, 2007, it transferred the property to the LIA 172 Marlborough Limited Partnership (the general partners of which was another of George Demeter’’s affiliated companies).

In November of 2013, Alexandra Demeter applied for (and subsequently received) permission to legalize the occupancy as eight apartments, indicating that had been the use for many years.

172 Marlborough remained an apartment building in 2016. 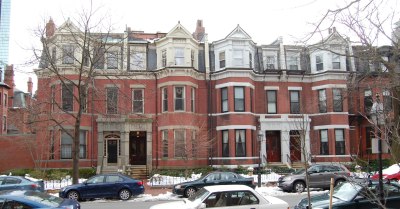