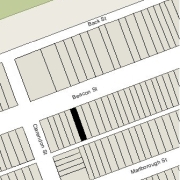 191 Beacon is located on the south side of Beacon, between Berkeley and Clarendon, with 189 Beacon to the east and 193 Beacon to the west.

The land for 191-193 Beacon was purchased by James H. Blake from William Carpenter in two transactions, 193 Beacon on December 21, 1870, and 191 Beacon on March 23, 1871. The land for 195 Beacon was purchased by Nathaniel Curtis on December 16, 1870, from Francis E. Parker, a lawyer, who had purchased it from William Carpenter on April 11, 1870. William Carpenter was a builder and it is possible that he constructed all three houses. The land had previously had several owners and originally was part of two larger parcels acquired from the Commonwealth of Massachusetts on March 7, 1860, and May 2, 1860, by Norman Munson. Norman Munson and his partner, George Goss, were the contractors responsible for filling the Commonwealth’s Back Bay lands.

Click here for an index to the deeds for 191 Beacon, and click here for further information about the land between the south side of Beacon and Alley 420, from Berkeley to Clarendon.

James Henry Blake and his wife, Alice (Spring) Blake, made 193 Beacon their home. He was a banker.

On December 2, 1872, 191 Beacon was purchased from James Blake by banker and railroad investor Nathaniel Thayer. He and his wife, Cornelia Patterson (Van Rensselaer) Thayer, lived at 70 Mt. Vernon.

191 Beacon became the home of the Thayers’ daughter-in-law, Alice (Robeson) Thayer, the widow of Stephen Van Rensselaer Thayer, and their infant son, Stephen, Jr. Prior to her husband’s death in October of 1871, they had lived at 6 Commonwealth.  She also maintained a home in Tiverton, Rhode Island.

Alice Thayer continued to live at 191 Beacon during the 1882-1883 winter season, but then lived elsewhere for the next two seasons. For at least a portion of that time, she and her son were traveling in Europe with her mother, Mary Arnold (Allen) Robeson, the widow of Andrew Robeson, who lived at 267 Clarendon.

By the 1884-1885 winter season, Annah Curtis had purchased and moved to 29 Hereford and 191 Beacon had become the home of her parents, Joseph Swain Lovering and Mary (Taylor) Lovering. They had lived at 188 Beacon during the previous season. He was a dry goods merchant and importer.  By the 1885-1886 season, they had moved to 232 Beacon and Alice Thayer had resumed living at 191 Beacon.

Nathaniel Thayer had died in March of 1883 and, in his will, he devised 191 Beacon to Alice Thayer and Stephen Van Renssaeler Thayer, Jr.

During the 1888-1889 winter season, Alice Thayer was living elsewhere and 191 Beacon was the home of Dr. William Sohier Bryant and his wife, Martha Lyman (Cox) Bryant. They previously had lived at 292 Marlborough.  William Bryant had graduated from Harvard Medical School in 1888 and had just begun practice as a physician, specializing in the ear.

In October of 1893, Alice Thayer again traveled abroad and during the 1893-1894 winter season, 191 Beacon was the home of Mrs. Julia (Du Gay) Nevins, widow of Henry Coffin Nevins, a textile manufacturer and wholesale merchant. They had lived in New York City prior to his death in June of 1892.

By the 1894-1895 winter season, Julia Nevins had moved to an apartment at the Hotel Agassiz at 191 Commonwealth and Alice Thayer was once again living at 191 Beacon.

On August 21, 1895, 191 Beacon was purchased from Alice Thayer and Stephen V. R. Thayer, Jr., by Edward Wilbur Dean Hamilton and his wife, Lilian (Derby) Holmes Hamilton. They previously had lived in an apartment at 222-224 Marlborough.  E. Wilbur Dean Hamilton was an impressionist artist and illustrator. They continued to live at 191 Beacon during the 1897-1898 winter season, but moved thereafter to The Belvoir at 636-638 Beacon.

The house was not listed in the 1899 Blue Book.

On October 1, 1898, 191 Beacon was purchased from Edward Hamilton by wool merchant Henry Clay Weston. He and his wife, Evelyn (Owen) Weston, lived at 177 Beacon.

By the 1899-1890 winter season, 191 Beacon was the home of the Westons’ son-in-law and daughter, Allen Curtis and Evelyn (Weston) Curtis. They previously had lived at 277 Clarendon. They also maintained a home, Sunfield, in Beverly Farms.

Allen Curtis was a stockbroker.

Allen and Evelyn Curtis continued to live at 191 Beacon during the 1916-1917 winter season, but moved thereafter to 51 Beacon.

Evelyn Weston died in November of 1917 and 191 Beacon was inherited by Evelyn Curtis.

On April 24, 1919, 191 Beacon was purchased from Evelyn Curtis by Justine Van Rensselaer (Barber) Hooper, the wife of attorney Roger Fellowes Hooper. They previously had lived at 403 Marlborough.  They also maintained a home, Treetops, in Manchester.

On December 31, 1928, she transferred the property into both of their names.

Roger Hooper died in December of 1959; Justine Hooper continued to live at 191 Beacon until about 1960.

On December 27, 1960, 191 Beacon was acquired from Justine Hooper by Octavia Morley (Sawyer) Walsh, the widow of Edward M. Walsh. She previously had lived at 75 Marlborough.  She owned the Walsh Sprinkler Company, dealers in automatic sprinkler systems.  She had moved to 251 Beacon by 1963.

On July 9, 1962, 191 Beacon was acquired from Octavia Walsh by the R. S. R. Realty Company, Inc. (Richard Senter Robie, Jr., Vice President) and subsequently was converted into a dormitory for the Robie Secretarial School. The change in occupancy was not legalized until December of 1965.

On November 29, 1967, 191 Beacon was acquired from R. S. R. Realty by Emerson College, which continued to operate it as a dormitory.

On April 25, 1975, 191 Beacon was acquired from Emerson College by James C. Lawless and his wife, Christina H. Lawless, trustees of the C & J Realty Trust.

In March of 2005, they applied for (and subsequently received) permission to convert the property from a lodging house into thirteen apartments.