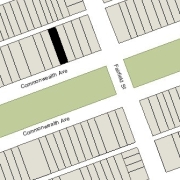 251 Commonwealth was designed by Shaw and Shaw, architects, and built in 1880-1881 by Shepard & Weston and B. D. Whitcomb, builders, as the home of Joseph Smith Bigelow and his wife, Mary Cleveland (Bryant) Bigelow. He is shown as the owner of 251 Commonwealth on the original building permit application, dated November 2, 1880.

Joseph Bigelow purchased the land the house on October 5, 1880, from John W. Wheelwright. The lot previously had changed hands several times, and originally was part of one of several parcels purchased from the Boston Water Power Company on January 29, 1866, by a real estate investment trust formed by John Templeman Coolidge, Franklin Evans, and Charles Henry Parker. The trust had subsequently subdivided the parcels into lots, which it sold to investors and builders, who then frequently resold the lots to others.

Click here for an index to the deeds for 251 Commonwealth, and click here for further information about the land between the north side of Commonwealth and Alley 427, from Fairfield to Gloucester.

By the 1882-1883 winter season, Joseph and Mary (Bryant) Bigelow had made 251 Commonwealth their home.  They had married in April of 1877, after which their primary residence had been in Cohasset, where they continued to maintain a home after completing 251 Commonwealth. In December of 1881, when their son, Arthur George Bigelow was born, they were living at 61 Beacon with Mary Bigelow’s mother, Elizabeth Brimmer (Sohier) Bryant, the widow of Henry Perkins Bryant.

Joseph Bigelow was a banker and investor in copper mines.

During the 1889-1890 winter season, the Bigelows were traveling abroad and 251 Commonwealth was the home of Joseph Bigelow’s brother-in-law and sister, Thomas Nelson and Anne S. (Bigelow) Nelson.  A former real estate dealer, he was treasurer of several mining companies.  They had lived at 166 Marlborough during the previous season, and by the 1890-1891 season were living at 128 Marlborough, where Anne Nelson died in March of 1891.

Henry Bigelow married in August of 1906 to Elizabeth Perkins Shattuck of 135 Marlborough. After their marriage, they lived in Concord, Massachusetts,  A marine biologist and oceanographer, he was a founder of the Woods Hole Oceanographic Institution and served as its first director, from 1930 to 1939.

Mary Bigelow married in September of 1906 to John Lewis Bremer, Jr., of 416 Beacon. He was an instructor and later professor of histology at Harvard Medical School. After their marriage, they lived at 18 Fairfield and then at 10 Fairfield.

During the 1908-1909 winter season, Joseph and Mary Bigelow spent the earlier part of the season in Cohasset and the latter part at 10 Fairfield while John and Mary Bremer were traveling.

The Bigelows leased 251 Commonwealth to ornithologist John Eliot Thayer and his wife, Evelyn Duncan (Forbes) Thayer. They had lived at 173 Commonwealth during the previous season. They leased the house again during the 1909-1910 season (the Bigelows spent the season in Cohasset) and then moved to 25 Exeter for the next season.

The Bigelows resumed living at 251 Commonwealth for 1910-1911 winter season. Their unmarried sons – Joseph, Arthur, Cleveland, and Stephen – lived with them.

Joseph Bigelow, Jr., a member of the Harvard Class of 1900, left college in 1899 and went to the West Indies, where he was a sugar grower.  He returned to Boston and lived with his parents, but (according to the his 1915 Harvard Class Report) spent most of his time “in travel and yachting,“ including traveling “around the world on a sailing ship and spending a year on a trading schooner in the Solomon Island.” He married in September of 1912 to Ernestine Hilda Gazan. They subsequently made their home at Snug Harbor Farm in Anne Arundel County, Maryland.

Cleveland Bigelow married in December of 1913 to Frances Constance Folsom. After their marriage, they lived in Cohasset. He was a lawyer until about 1919, when he became a cotton merchant. During the 1920-1921 winter season, they lived at 10 Gloucester.

Stephen Bigelow, an insurance agent, married in May of 1921 to Ann Meredith. After their marriage, they lived in apartment at 405 Marlborough. They divorced in the early 1920s and he resumed living at 251 Commonwealth and in Cohasset with his parents and brother, Arthur.

Arthur Bigelow, a dry goods merchant, continued to live at 251 Commonwealth during the 1929-1930 winter season but had moved to an apartment at 499 Beacon by April of 1930, at the time of the US Census.

On January 2, 1932, 251 Commonwealth was purchased from Joseph Bigelow’s estate by Shirley Clifford Speed, a real estate dealer who converted many Back Bay houses into lodging houses and apartments.

In June of 1932, he filed for permission to convert 251 Commonwealth from a single-family dwelling into “apartments and rooms [for] two families.”  He subsequently abandoned the application.

In the spring of 1933, 251 Commonwealth was acquired from Frances Fagen by the School of Expression. The deed was dated August 2, 1932 (the same day as Frances Fagan had purchased the property) but was not recorded until March 30, 1933.

In October of 1932, the school had applied for (and subsequently received) permission to convert the property from a single-family dwelling into a school and one residential unit. 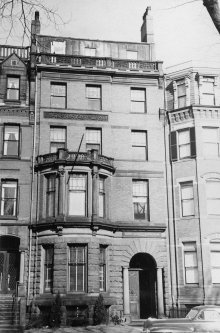 By the 1940s, the school was using the residential portion of the property as a lodging house. They were cited by the Building Department and in March of 1942, applied for (and subsequently received) permission to convert the property into a school and lodging house.

In June of 1943, the School of Expression changed its name to Curry College. It continued to be located at 251 Commonwealth until about 1953. From about 1950 to 1953, it also maintained a dormitory at 253 Commonwealth.

The building was shown as vacant in the 1954 City Directory.

On May 27, 1954, 251 Commonwealth was acquired from Curry College by the Boston Music School, Inc., a non-profit community music school. It previously had been located at 41 Allen Street. In January of 1954, prior to taking title to 251 Commonwealth, it applied for (and subsequently received) permission to convert the property from a school of expression into a school of music.

On April 20, 1971, 251 Commonwealth was acquired from the Community Music Center by the Psychomotor Institute, a school for training psychologists. The Institute was founded by Albert Pesso and his wife, Diane (Boyden) Pesso, to develop and apply their system of psychotherapy described on their website (in 2014) as “interactional, body-based group therapy that enables one to recreate past experiences in order to compensate emotional deficits earlier in life.”

On April 30, 1975, Albert and Diane Pesso acquired 251 Commonwealth from the Psychomotor Institute.

On August 3, 1976, 251 Commonwealth was acquired from the Pessos by Victor B. Castellani and his wife, Marianne M. (Sukert) Castellani. In June of 1979, Victor Castellani applied for (and subsequently received) permission to convert the property from a school of music and one apartment into a four-family dwelling, including remodeling the existing fifth-floor penthouse.

251 Commonwealth remained a four- to six-family dwelling in 2020.