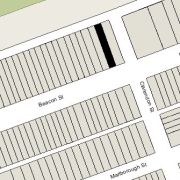 184 Beacon is located on the north side of Beacon, between Clarendon and Dartmouth, with 182 Beacon to the east and 186 Beacon to the west.

184 Beacon was designed by architects Snell and Gregerson and built ca. 1866, one of two contiguous houses (182-184 Beacon) designed as a symmetrical pair and built for John Lowell Gardner on land which he purchased on July 16, 1860, from the Boston and Roxbury Mill Corporation. John L. Gardner and his wife, Catharine Elizabeth (Peabody) Gardner, made 182 Beacon their home.

Bainbridge Bunting’s Houses of Boston’s Back Bay does not attribute 182-184 Beacon to a specific architect. However, a March 12, 1866, article in the Boston Evening Transcript reported that “Mr. John L. Gardner has laid the foundations of a new dwelling-house, on a corner lot far out on the water side, from designs by Messrs. Snell & Gregerson.” Given the symmetrical design of the two houses, it appears likely that Snell and Gregerson designed both houses for John L. Gardner.

Click here for an index to the deeds for 184 Beacon, and click here for further information on the land on the north side of Beacon, including the Storrow Memorial Embankment on the Esplanade.

On March 25, 1870, 184 Beacon was purchased from John L. Gardner by shipping merchant Joseph Coolidge. He and his wife, Ellen (Eleanor) Wayles (Randolph) Coolidge, made it their home. They had lived at 12 Pemberton Square in the mid-1860s. Ellen Coolidge was the daughter of Thomas Mann Randolph and Martha Jefferson (daughter of President Thomas Jefferson).

Ellen Coolidge died in April of 1876. Joseph Coolidge continued to live at 184 Beacon until his death in December of 1879.

In January of 1880, 184 Beacon was advertised for sale by real estate dealers John Jeffries & Sons. The house did not sell and was not listed in the 1881 and 1882 Blue Books.

On October 6, 1881, it was offered for sale at public auction by Samuel Hatch & Co., auctioneers.  The successful purchaser was investment banker Henry Chapman Wainwright, who took title to the property on October 19, 1881, from Joseph Coolidge’s estate.  He probably was acting on behalf of Joseph Coolidge’s son, Thomas Jefferson Coolidge, to whom he transferred the property on December 5, 1881.

T. Jefferson Coolidge and his wife, Mehitable (Hetty) Sullivan (Appleton) Coolidge, lived at 93 Beacon. He was an investor in textile mills, banks, and railroads, and later would serve as Ambassador to France. In 1901, soon after his wife’s death, he purchased 315 Dartmouth and made it his home.

By the 1882-1883 winter season, 184 Beacon was the home of T. Jefferson and Hetty Coolidge’s son-in-law and daughter, attorney Lucius Manlius Sargent and Marian Appleton (Coolidge) Sargent. They previously had lived at 231 Beacon.

In May of 1883, Lucius Sargent applied for (and subsequently received) permission to build a stable at the rear of the property.

Lucius Sargent died in November of 1893, and Marian Sargent moved thereafter to the Tudor at the corner of Beacon and Joy Streets.  By the 1903-1904 winter season she was living with her widowed father at 315 Dartmouth (Hetty Coolidge had died in March of 1901).

On November 1, 1894, 184 Beacon was acquired from T. Jefferson Coolidge by his daughter-in-law, Clara Gardner (Amory) Coolidge, the wife of Thomas Jefferson Coolidge, Jr. They previously had lived at 170 Beacon.  They also maintained a home in Magnolia.

Thomas Jefferson Coolidge, Jr., was a banker and co-founder (with his father) of the Old Colony Trust Company.

In July of 1917, she applied for (and subsequently received) permission to remodel an existing garage (presumably the former stables, being used as a garage), bringing it into conformance with fire and building code requirements.

Clara Coolidge continued to live at 184 Beacon until about 1932.

On March 31, 1934, 184 Beacon was acquired from Herbert Sumner by Margaret (Thomas) Gardiner, wife of William Tudor Gardiner. They also maintained a home in Augusta, Maine, and later in Woolwich, Maine.

William Gardiner was an attorney and had served as Governor of Maine from 1928 through 1932.

The Gardiners continued to live at 184 Beacon until about 1949.

On June 30, 1950, 184 Beacon was acquired from Margaret Gardner by Emerson College. In May of 1950, prior to taking title, it had filed for permission to remodel the house and convert it from a single-family dwelling into a radio and television instruction studio. The application was approved, but appears to have been abandoned.

In April of 1980, Divine Word Missionaries filed to confirm the existing occupancy as a “missionary house for priests,” noting that this had been the use for many years.

In June of 2006, it filed for (and subsequently received) permission to convert the property into four apartments, including constructing a penthouse depressed into the roof line.

On January 7, 2008, it converted the property into four condominium units, the 184 Beacon Street Condominium.