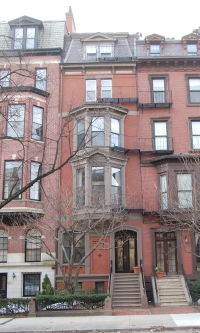 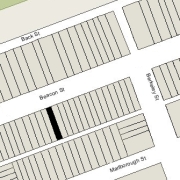 177 Beacon is located on the south side of Beacon, between Berkeley and Clarendon, with 175 Beacon to the east and 179 Beacon to the west.

177 Beacon was built ca. 1871 as the home of wool merchant Henry Clay Weston and his wife, Evelyn (Owen) Weston.  They previously had lived at 73 Marlborough. They also maintained a home, The Uplands, in Beverly Farms.

Henry Weston purchased the land for 177 Beacon on December 9, 1870, from merchant, cotton manufacturer, and real estate developer Charles William Freeland. It was part of two parcels originally purchased from the Commonwealth of Massachusetts on February 4, 1860, and February 10, 1860, by Norman Munson. He and his partner, George Goss, were the contractors responsible for filling the Commonwealth’s Back Bay lands.

Click here for an index to the deeds for 177 Beacon, and click here for further information about the land between the south side of Beacon and Alley 420, from Berkeley to Clarendon.

Bainbridge Bunting, in Appendix A of his Houses of Boston’s Back Bay, indicates that 177 Beacon was built ca. 1871 and was designed by the architectural firm of Snell and Gregerson.  However, in the introduction to Appendix A, he notes that “subsequent to the second printing of this book in 1968 the attributions to important architects of several early Back Bay houses have been brought to my attention by friends.”  Among these, Bunting indicates that, “from a sifting of mountainous drawings and office correspondence now in the possession of the Boston Public Library, Wheaton Holden has been able to identify” that 177 Beacon was designed by Peabody and Stearns. 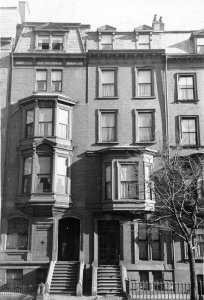 Henry Weston died in July of 1904, and Evelyn Weston continued to live at 177 Beacon until her death in November of 1917. 177 Beacon was inherited by the Westons’ only child, Evelyn (Weston) Curtis. She and her husband, Allen Curtis, a stockbroker, lived at 51 Beacon, where they had moved earlier that year from 191 Beacon.

On August 11, 1919, 177 Beacon was purchased from Evelyn (Weston) Curtis by Dr. Edwin Allen Locke. He and his wife, Elizabeth (Ferguson) Locke, made it their home. They previously had lived at 311 Beacon.

Edwin Locke was a physician specializing in internal medicine and a professor at Harvard Medical School.  After moving to 177 Beacon, the Lockes continued to own 311 Beacon, where he maintained his medical practice.

They continued to live at 177 Beacon until about 1935, when he retired from practice and accepted a full-time position as Professor of Hygiene and Director of Health and Athletics at Williams College in Williamstown.

In February of 1937, Edwin Locke filed for (and subsequently received) permission to convert 177 Beacon from a single-family dwelling into a lodging house. 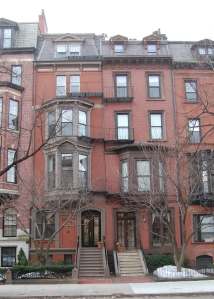 By 1938, it was the home of Mrs. Helen (Taylor) Hunt, the widow of Arthur P. Hunt, who operated it as a lodging house.  She previously had lived at 339 Marlborough.  She continued to live and operate a lodging house at 177 Beacon until about 1940.

On November 16, 1945, 177 Beacon was acquired from Edwin Locke by Carlton Lloyd Bain and his wife, Harriet Preston (Kelly) Bain, who continued to operate it as a lodging house. He was a supervisor for the Internal Revenue Service. They lived at 23 Maple in West Roxbury, and never resided at 177 Beacon.

They continued to operate it as a lodging house (called the Bain Guest House) until about 1965.

On September 7, 1965, 177 Beacon was acquired from the Bains by Chamberlayne School and Chamberlayne Junior College. The legal occupancy remained a lodging house, but was used by the school as a dormitory for thirty people. It continued to operate a dormitory there in 1973.

On March 15, 1974, 177 Beacon was purchased from Chamberlayne by attorney Frank S. Ganak and his wife, Yola Nina (DiCecca) Ganak. In June of 1974, Frank Ganak applied for (and subsequently received) permission to convert the property from a lodging house/dormitory into eleven apartments.

On December 15, 1975, they transferred the property to Yola Ganak’s brother, Dr. Charles A. DiCecca, as trustee of the 177 Beacon Street Trust.

On October 17, 1978, 177 Beacon was acquired from Charles DiCecca by real estate broker Lili Banani, trustee of the Moshiri Company Trust. In October of 1978, she and her husband, Farshid Banani, filed for (and subsequently received) permission to remodel the property and convert it into four units.