192 Commonwealth was designed by Bigelow and Wadsworth, architects, and built in 1926-1927 as an eight story, eight unit apartment house for investment brokers Harold B. Raymond and Walter Carlton Rich, as trustees of the Investors Securities Trust. The Investors Securities Trust is shown as the owner on the original building permit application, dated August 24,1926.

192 Commonwealth replaced the original townhouse at 192 Commonwealth. It had been purchased by the Investors Securities Trust on August 15, 1926, from the estate of Franklin Blackwood Fay, and razed soon thereafter.

Click here for an index to the deeds for 192 Commonwealth, and click here for further information about the land between the south side of Commonwealth and Alley 434, from Dartmouth to Exeter.

The new apartment house at 192 Commonwealth was completed by the 1927-1928 winter season. Among the first residents were the developer, W. Carlton Rich, and his wife, Jessie (Phillips) Rich.  They previously had lived in an apartment at 512 Beacon.  She died in September of 1929. He continued to live at 192 Commonwealth during the 1930-1931 season, but moved thereafter to Newtonville.

On April 28, 1937, Elina M. Johnson foreclosed on a mortgage given in November of 1927 by the Investors Securities Trust to the First National Bank of Boston and assigned to her. On the same day, she transferred the property to the Allied Commercial Corporation.

The property changed hands and on June 5, 1964, it was acquired by Nicholas D. Rizzo, trustee of the Munick Realty Trust.

192 Commonwealth was designed by Emerson and Fehmer, architects, and built in 1872 by Standish & Woodbury, masons, and Nathaniel O. Hart, carpenter, for Sarah Louise (Prentiss) Hubbell, the widow of brick manufacturer Peter Hubbell. She previously had lived in Charlestown, where her husband had died in January of 1871. She is shown as the owner of 192 Commonwealth on the original building permit application (for a house “with face brick and brownstone trimmings” and private stable) dated April 17, 1872.

Sarah Louise Hubbell traveled to Europe during the 1872-1873 winter season, while her new home was under construction. She returned in August of 1873, arriving in New York City quite ill, and died in September of 1873 in a New York Hotel. 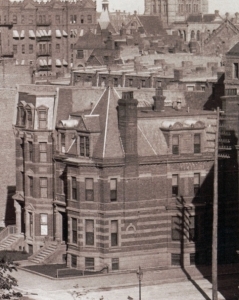 190-192 Commonwealth; detail from photograph by John P. Soule; courtesy of the Boston Athenaeum

Peter Hubbell had been married previously to Sarah Louise (Prentiss) Hubbell’s sister, Abigail Jane Prentiss, who had died in August of 1843. They had three children, only one of whom — John Henry Hubbell – was living at the time of Peter Hubbell’s death. Peter Hubbell’s will provided that John Henry Hubbell would inherit his property upon the death of Sarah Louise Hubbell. Peter and Sarah Louise Hubbell had no children and, in her will, she excluded John Henry Hubbell from her heirs (noting that his inheritance from his father would be sufficient “for all his wants”). She left the bulk of her estate, including 192 Commonwealth, to her only surviving sister, Caroline (Prentiss) Sanger, the widow of Henry Kirkland Sanger, and to Gerrit Henry Smith and Cornelia (Smith) Baird, the wife of Absolem Baird, the children of her deceased sister, Ann Van Buskirk (Prentiss) Smith and Peter Smith. The will was unclear as to whether the three heirs were to receive equal shares, or whether the estate was to be divided based on the heirs’ relationship to Sarah Louise Hubbell (50 percent to her sister and 25 percent each to her deceased sister’s two children). The latter methodology was approved by the Massachusetts Supreme Judicial Court in April of 1874.

In the spring of 1876, the administrators of Sarah Hubbell’s estate offered 192 Commonwealth for sale.  A March 23, 1876, advertisement in the Boston Daily Advertiser noted that the lot had a frontage of 32 feet but that “the house is 28 feet wide with parlors and dining room on the first floor, is built in the most thorough and substantial manner, elaborately finished throughout, mirrors set in the wall on the lower story and hall floor of encaustic tiles designed and made for it in England.  In the rear, opening on Exeter street, is a stable for two horses with abundant room for carriages, harnesses, hay, &c.”

Although the advertisement indicated that, “in order to settle the estate the Administrators are authorized to sell at a price much below cost,” the house did not immediately sell.

On February 8, 1877, 192 Commonwealth was purchased from Sarah Louise Hubbell’s heirs by Mary Caroline (Rogers) Fay, the wife of Franklin Blackwood Fay. They previously had lived at the Hotel Vendôme. They also maintained a home in Manchester.

Franklin Blackwood Fay was a boot, shoe, and leather dealer.

During the 1882-1883 winter season, John Hartt is shown in the Blue Book as living at 192 Commonwealth.  This probably was John Francis Hartt, a ship chandler and former boot and shoe dealer, and his wife, Emma Louisa (Nickerson) Hartt, or it may have been his father, a retired shoe and leather dealer, and his wife, Mary Basset (Lilly) Hartt.  John Francis and Emma Hartt’s usual residence was in Brookline; John and Mary Hartt’s usual residence was in Cambridge.

By the 1911-1912 winter season, the Fays’ daughter, Ethel (Fay) Van DeVenter, lived with them at 192 Commonwealth.  She had married in November of 1899 to Lloyd Miller Van DeVenter and subsequently divorced.

In the early morning of December 26, 1922, the Fay’s stable, behind 192 Commonwealth, was damaged by fire. Their carriage horse, “Peaches,” was saved by mounted patrolman Lester D. Hill who was presented with a bronze medal by the Massachusetts Society for the Prevention of Cruelty to Animals.

The Fays and Ethel Van DeVenter continued to live at 192 Commonwealth in 1925.

On August 15, 1926, 192 Commonwealth was purchased from F. Blackwood Fay’s estate by the Investors Security Trust. It was razed soon thereafter.