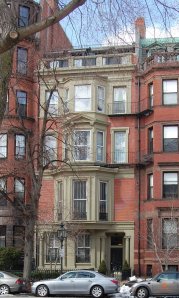 183 Commonwealth was designed by Snell and Gregerson, architects, and built in 1878-1879 by Webster & Dixon, masons, and Daniel J. Donovan, carpenter, for Frank Merriam and his wife, Teresa Beatrice (Lovering) Merriam. He is shown as the owner on the original building permit application, dated April 30, 1878.

Frank Merriam purchased the land for the house on March 7, 1878, from the Commonwealth of Massachusetts.

Click here for an index to the deeds for 183 Commonwealth, and click here for further information about the land between the north side of Commonwealth and Alley 425, from Dartmouth to Exeter.

On April 12, 1879, the Boston Journal commented that “a first-class house has been erected for Franklin Merriam by Webster & Dixon, from plans by Snell & Gregerson. The dimensions are 27 by 69 feet, three stories, Mansard roof, stone and brick front. The carpenter work has been done by Daniel J. Donovan, and is a credit to the craft.”

By the 1879-1880 winter season, Frank and Teresa (Lovering) Merriam had made 183 Commonwealth their home. They previously had lived at 227 Beacon. They also maintained a home, the White House, in Nahant.

Frank Merriam was a trustee of estates and an agent for various properties.

During the 1884-1885 winter season, the Merriams were traveling in Europe and 183 Commonwealth was the home of William Eliot Sparks and his wife, Harriet Augusta (Mason) Sparks.  Their primary home was in Taunton, where he was associated with his father-in-law’s machine works.  By the 1885-1886 season, they had moved to 245 Commonwealth.

The Merriams lived at 183 Commonwealth during the next three winter seasons, but during the 1888-1889 season it was the home of Robert Chamblet Hooper and his wife, Helen Angier (Ames) Hooper.  They had lived at 244 Beacon during the previous season.

Robert Chamblet Hooper was treasurer and later president of the Constitution Wharf Company.  A noted dog fancier, he was owner of “Judge” (also known as “Hooper’s Judge”), credited as the ancestor of the Boston Terrier breed.

During the 1889-1890 winter season, the Merriams were once again living at 183 Commonwealth, but during the 1890-1891 season it was the home of Asa Perkins Potter and his wife, Delle (Sheldon) Potter.  They previously had lived at 29 Fairfield.

Asa Potter was a real estate investor and banker, president and one of the principal owners of the Maverick National Bank.  In October of 1891, the bank failed and Asa Potter, Jonas H. French (the other principal owner), and Thomas Dana (another director) faced criminal charges, accused of violating federal banking laws.

The Potters moved to the Longwood neighborhood of Brookline by 1892.  They subsequently moved to New York City and then to Rye, New York.

The Merriams resumed living at 183 Commonwealth until the 1893-1894 winter season, when they moved to 10 Marlborough and 183 Commonwealth was the home of George Augustus Nickerson and his wife, Ellen Floyd (Touzalin) Nickerson.  He was president of Arlington Mills, textile manufacturers.  They also maintained a home in Dedham.  They moved the next year to a new Boston home they had built at 303 Commonwealth.

During the 1894-1895 winter season, the Merriams were living at 183 Commonwealth again, but during the 1895-1896 season it was the home of Mr. and Mrs. F. L. Gay, probably Frederick Lewis Gay and his wife, Josephine (Spencer) Gay, whose usual home was in Brookline.

The Merriams resumed living there during the 1901-1902 winter season, and continued to live there through the 1902-1903 season, after which they traveled abroad once again.

By the 1905-1906 winter season, the Merriams were living at 183 Commonwealth once again and continued to do so for the rest of their lives.

Frank Merriam died in April of 1924.  Teresa Merriam continued to live at 183 Commonwealth until her death in April of 1936.  In her will, she left 183 Commonwealth to their daughter, Teresa Lovering Merriam, who had lived with her, and divided the remainder of her estate between Teresa and her other daughter, Mary Lovering Merriam, who lived in San Diego.

Teresa Merriam continued to live at 183 Commonwealth and in Nahant until about 1943.

On August 19, 1943, 283 Commonwealth was purchased from Teresa Merriam by William Karmazine, a loan company executive, as trustee of the Esdith Realty Trust, and on September 7, 1943, it was acquired from him by Bernard J. Killion.

On April 4, 1945, 183 Commonwealth was acquired from Bernard Killion by Einar Anderson. In May of 1945, he filed for (and subsequently received) permission to convert the property from a single-family dwelling into nine apartments.

On August 7, 1945, 183 Commonwealth was acquired from Einar Anderson by Beatrice (Miller) Silversmith, the wife of Peter P. Silversmith. He was a lawyer, hotel operator, and real estate dealer. They lived in Brookline and later in an apartment at 62 Commonwealth.

On July 19, 1960, Beatrice Silversmith transferred 183 Commonwealth to herself and her husband as trustees of The Peter P. Silversmith Trust.

The property subsequently changed hands and on June 7, 1963, was purchased by Peter N. Petritis, trustee of the Paul-Pet Realty Trust.  In December of 1963, he filed for (and subsequently received) permission to legalize the occupancy as eleven apartments, indicating on his application that it was “purchased by me as an eleven apartment house” and “shows no evidence of having been used for any other purpose for some time.”

Peter Petritis died in April of 1967, and on June 8, 1967, 183 Commonwealth was purchased from Phyllis Lee (Fawcett) Petritis (his widow) and William Coltin, trustees of the Paul-Pet Realty Trust, by Abbot M. Peterson, III, and his wife, Barbara E. (Pease) Peterson. They lived in an apartment at 464 Beacon. The Petersons also purchased 55 Commonwealth from the Paul-Pet Realty Trust on the same day.

On April 11, 1986, it converted the property into six condominium units, The 183 Commonwealth Avenue Condominium.