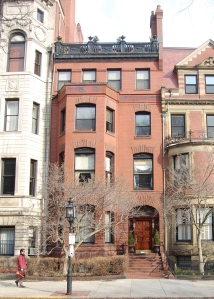 215 Commonwealth was designed by Rotch and Tilden, architects, and built in 1883 by David Connery & Co., masons, and S. M. Chesley & Co., carpenters, as the home of James Lawrence and his wife, Caroline Estelle (Mudge) Lawrence. They previously had lived at 82 Marlborough. They also maintained a home in Groton, where James Lawrence owned and operated a farm. He is shown as the owner of 215 Commonwealth on the original building permit application, dated January 17, 1883.

Click here for an index to the deeds for 215 Commonwealth, and click here for further information about the land between the north side of Commonwealth and Alley 426, from Exeter to Fairfield.

The Lawrences continued to live at 215 Commonwealth during the 1884-1885 winter season, but moved thereafter, probably to their home in Groton.

During the 1885-1886 winter season, 215 Commonwealth was the home of John Forrester Andrew and his wife, Harriet (Thayer) Andrew. They previously had lived at 70 Mt. Vernon with Harriet Andrew’s mother, Cornelia Patterson (Van Rensselaer) Thayer, the widow of Nathaniel Thayer.

John Forrester Andrew was a lawyer and State Senator. In 1886, he would be an unsuccessful candidate for Governor, and in 1888 he would be elected to the US Congress. His father, John Albion Andrew, had been Governor of Massachusetts during the Civil War.

On January 27, 1886, 215 Commonwealth was purchased from James Lawrence by Edward Livingston Davis, a manufacturer of railroad iron. He and his wife, Maria Louisa (Robbins) Davis, made it their Boston home. Their primary residence was in Worcester, where he had served as Mayor. They also maintained a home in Prides Crossing.

The Davises continued to live at 215 Commonwealth until about 1908, when they made Worcester their year-round home.

On September 2, 1910, 215 Commonwealth was purchased from Edward Davis by Mehitable (“Hetty”) Appleton (Sargent) Higginson, the wife of Francis Lee Higginson, Jr. They also maintained a home in Wenham.

Hetty Higginson died in June of 1921. Francis Higginson continued to live at 215 Commonwealth and in Wenham.

In October of 1930, he married again, to Aileen Muriel Johnstone (who had been listed at 215 Commonwealth in the 1930 US Census, before their marriage, as housekeeper).

Francis and Aileen Higginson continued to live at 215 Commonwealth during the 1935-1936 winter season, but moved thereafter to 129 Commonwealth.

On April 29, 1936, 215 Commonwealth was purchased from Francis Higginson by Gustaf Rudquist, a delicatessen owner. He and his wife, Ida S. (Lansahl) Rudquist, made it their home. They previously had lived at 1 Bowdoin.

In May of 1936, he applied for (and subsequently received) permission to convert the property from a single-family dwelling into a lodging house.

In November of 1936, soon after it was converted, the police arrested two of the residents – Mrs. Irene Bostwick, alias Dr. Rene Cote, and Walter D. Simonson, alias Walter Cote – for running what a November 9. 1936, Boston Globe article called a “clearance house” for a large ring of call girls.

On February 18, 1949, Gustaf Rudquist transferred the property to his wife and their son, Birger John Rudquist.  Birger Rudquist and his wife, Katherine C. (Elliott) Rudquist lived in Palo Alto, California.

Gustaf Rudquist died in February of 1950. Ida Rudquist continued to live and operate a lodging house at 215 Commonwealth until about 1956.

On July 20, 1956, 215 Commonwealth was acquired from Ida Rudquist and Birger Rudquist by Louis Di Giovanni, trustee of the Aloy Realty Trust. On May 1, 1958, he transferred the property to himself and Miss Mary Angela Cocuzzo.

By 1958, 215 Commonwealth had been converted into twelve apartments, although it continued to maintain its legal occupancy as a lodging house.

The property changed hands and on May 30, 1969, was acquired by Ara K. Gechijian of Arlington.

On July 28, 1971, 215 Commonwealth was purchased from Ara Gechijian by Margaret (Henry) Gordon, the wife of mortgage broker Mark B. Gordon. They lived at 100 Chestnut. On the name day, she transferred the property to her brother-in-law, Rev. S. Gerald Gordon, trustee of the 215 Commonwealth Realty Trust, established for the benefit of Mark and Margaret Gordon and S. Gerald Gordon and his wife, Stella A. (Miga) Gordon.  S. Gerald and Stella Gordon lived in Rumford, Rhode Island.

On October 3, 1974, Winthrop Savings Bank foreclosed on its mortgage to Margaret Gordon and sold 215 Commonwealth back to Ara Gechijian and his wife, Nancy Marie (Giragosian) Gechijian.

In December of 1974, the Building Department issued a violation notice for failure to change the legal occupancy from a lodging house to twelve apartments.

On December 4, 1974, 215 Commonwealth was acquired from the Gechijians by Antonio de J. Cardoza of Lexington. On March 27, 1975, he transferred the property to Medanos, Inc.

On January 10, 1979, 215 Commonwealth was purchased from Medanos, Inc., by Modern Continental Enterprises, Inc. (Lelio Marino, president).  In July of 1979, after selling the property, Medanos, Inc., filed for (and subsequently received) permission to convert the property from a lodging house into six apartments, which it indicated was the existing condition.