23 Commonwealth was built ca. 1868, one of two houses (21-23 Commonwealth) built at the same time and designed to form a symmetrical composition.

On July 2, 1860, Samuel Hooper sold a lot with a 60 foot frontage, where 21-23 Commonwealth would be built, to Gardiner Howland Shaw, and on July 10, 1865, G. Howland Shaw sold it to John C. Gray.  John Gray sold the western portion of the lot, with a 20 foot frontage, to Daniel Spooner on January 29, 1867, at which time he indicated that had contracted to sell the land the east to Joseph B. Moors. That sale apparently did not close and on March 29, 1867, he sold the eastern portion, with a 29.5 foot frontage, to John Burnham, and the strip in the middle, with a 10.5 foot frontage, to Daniel Spooner, bringing that lot to 30.5 feet.

Click here for an index to the deeds for 23 Commonwealth, and click here for further information about the land between the north side of Commonwealth and Alley 422, from Arlington to Berkeley.

Daniel Spooner had been a partner in the China shipping firm of Russell & Co. He and Elizabeth had resided in Canton from about 1852 until about 1857, when they returned from China to Boston and he became a merchant. By 1865, he was treasurer of the Great Falls Manufacturing Company, a textile mill in Somersworth, New Hampshire. The Spooners previously had lived at 90 Boylston.

Elizabeth Elliot Spooner married in January of 1876 to Henry Howard Fay.  After their marriage, they lived at 330 Beacon.

During the 1877-1878 winter season, Elizabeth, Ellen, and Mary Spooner and Mary Torrey were living elsewhere, and 23 Commonwealth was the home of East India merchant John Charles Phillips, Jr., and his wife Anna (Tucker) Phillips.  In 1876, they had lived at 179 Beacon with his brother-in-law and sister, Alfred Belcher Hall and his wife, Margaret Welch (Phillips) Hall.

By 1879, the Phillipses had moved to 299 Berkeley and the Spooners and Miss Torrey were once again living at 23 Commonwealth.  By the time of the 1880 US Census, Elizabeth Spooner’s and Mary Torrey’s niece, Fanny Sturgis, daughter of William Sturgis and Katherine Gore (Torrey) Sturgis, also lived with them.

On October 9, 1880, 23 Commonwealth was purchased from Elizabeth Spooner by banker Eugene Van Rensselaer Thayer. He lived at 70 Mt. Vernon with his parents, Nathaniel Thayer and Cornelia (Van Rensselaer) Thayer.

Eugene V. R. Thayer married in December of 1880 to Susan Spring and they made their home at 23 Commonwealth. In 1880-1881, they built a stable at 334 Newbury.  They also maintained a home, Fairlawn, in Lancaster, and in the early 1880s built another home in Pride’s Crossing.

Elizabeth Spooner and her daughters traveled abroad.  When they returned, they lived temporarily at 186 Beacon and then, by the 1882-1883 winter season, moved to a new home she had built at 196 Commonwealth. Mary Torrey moved to 307 Beacon; Fanny Sturgis probably moved with her.

On October 1, 1880, in anticipation of selling 23 Commonwealth, Elizabeth Spooner entered into party wall agreements with her two neighbors, John Burnham, owner of 21 Commonwealth, and the estate of Samuel Hooper, owners of 25 Commonwealth. In the latter agreement, it was noted that the western wall of 23 Commonwealth, “by fault of the builders,” had been placed on 4 inches of the property of 25 Commonwealth, and that the division line between the two properties was actually 4 inches to the east. That agreement also noted that four windows had been installed by the Spooners in the party wall (two on the second story, one on the third story, and one on the fourth story) and that the parties agreed that the right to retain these windows extended to Mrs. Spooner and to Eugene V. R. Thayer, but that the right would not be continued or extended to any other purchaser (these windows subsequently were removed when 25 Commonwealth was expanded).

17-29 Commonwealth (ca. 1954-1959), from the Kepes-Lynch Photograph Collection; copyright Massachusetts Institute of Technology and licensed under the Creative Commons Attribution/Non-Commercial license

Eugene and Susan Thayer continued to live at 23 Commonwealth during the 1885-1886 winter season, but moved thereafter to 315 Dartmouth.

On August 28, 1886, 23 Commonwealth was purchased from Eugene V. R. Thayer by dry goods merchant Ezra Farnsworth. He and his wife, Mary Kunze (Oakley) Taylor Farnsworth, made it their home . They previously had lived at 23 Mt. Vernon.

On May 5, 1891, 23 Commonwealth was purchased from the estate of Ezra Farnsworth by Cora (Lyman) Shaw, the widow of Gardiner Howland Shaw (who, in the early 1860s, had owned the land on which the house was built). She lived at 1 Joy, where she continued to live during the 1891-1892 winter season.

Cora Shaw moved to 23 Commonwealth by the 1892-1893 winter season (in November of 1892, her former home at 1 Joy became the Diocesan House of the Episcopal Church Association).  She also maintained a home, Witchwood, in Pride’s Crossing.

Mrs. Shaw was joined at 23 Commonwealth by her son, Francis Shaw, a widower, and his two surviving children, Francis Shaw, Jr., and Miriam Shaw.  They also had lived with her at 1 Joy.  Francis Shaw owned a farm in New Braintree and later in Wayland, Five Points farm, where he raised Guernsey cattle.  His wife, Mary Peabody (Sears) Shaw, had died in November of 1890.

Francis Shaw and his children continued to live at 23 Commonwealth until about 1905, when they moved to Brookline.  In 1907, he purchased and moved to 190 Beacon.

By the 1917-1918 winter season, Cora Shaw was once again joined at 23 Commonwealth by her granddaughter, Miriam Shaw, whose father and brother moved from 190 Beacon to their farm in Wayland at about that time.  Miriam Shaw continued to live at 23 Commonwealth until the fall of 1921, when she traveled to Europe. 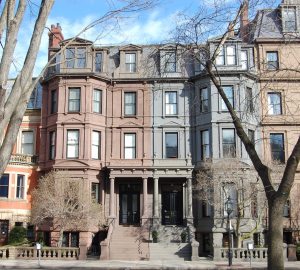 The house was not listed in the 1924 Blue Book.

On May 2, 1924, 23 Commonwealth was acquired from William J. Stober by Mary Bryant (Pratt) Sprague Brandegee, wife of real estate investor Edward Deshon Brandegee. The Brandegees lived at 23 Commonwealth during the 1924-1925 winter season but maintained their primary residence at their estate in Brookline, Faulkner Farm.  Mary (Pratt) Brandegee was the grand-daughter of shipping merchant and railroad investor William Fletcher Weld.  She had been married previously to Charles Franklin Sprague, and she and her first husband had established Faulkner Farm, probably on land that originally was part of the Weld Estate.

By the 1925-1926 winter season, the Brandegees had leased 23 Commonwealth to Dr. Elisha Flagg, a physician, and his wife, Eleanor Amelia Marguerite Cecilia (Shattuck) Whitney Flagg.  Hugh Whitney, Eleanor Flagg’s son by her previous marriage to Hugh A. Whitney, lived with them.  They had lived at 96 Beacon during the previous season, and at 55 Commonwealth during the 1923-1924 season.

Dr. and Mrs. Flagg and Hugh Whitney continued to live 23 Commonwealth during the 1933-1934 season, after which they moved to 88 Beacon. 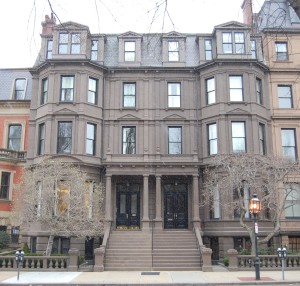 Edward Brandegee died in September of 1933, and Mary Brandegee moved to 23 Commonwealth following his death.  She also continued to maintain her home at Faulkner Farm.

Mary Brandegee continued to live at 23 Commonwealth until shortly before her death in August of 1956.

On February 19, 1956, 23 Commonwealth was purchased from Mary Brandegee by Mary (Whittier) Bottomly, the wife of John S. Bottomly. He was an attorney; he later would become an assistant attorney general for Massachusetts and would coordinate the Boston Strangler investigation. The Bottomlys lived in Wellesley.

On August 20, 1957, 23 Commonwealth was acquired from Mary Bottomly by Mary W. (Klohr) Merrill, the wife of Charles E. Merrill, Jr.  He was the founder and headmaster of Commonwealth School, located at 151 Commonwealth.  They continued to live at 23 Commonwealth until about 1974.

On July 1, 1975, 23 Commonwealth was acquired from Mary Merrill by Richard L. Church. In September of 1975 he applied for (and subsequently received) permission to convert the property from a single-family dwelling into four apartments.