230 Commonwealth was designed by architect George A. Avery and built in 1881-1882 by L. P. Soule, builder. It was one of two, and probably three, contiguous houses (228-230-232 Commonwealth) designed by George Avery at about the same time.

Charles Parker purchased the western 43 feet of land from building contractor George Wheatland, Jr., in two purchases, a 24 foot lot to the east on March 10, 1880, and a 19 foot lot to the west on April 16, 1880. In both cases, George Wheatland, Jr., had purchased the lots from the National Bank of Commerce of Boston on the same day he sold them to Charles Parker. On March 31, 1881, Charles Parker purchased a one foot wide strip of land to the east, abutting 226 Commonwealth, from grocer and tea dealer Henry Detrick Yerxa, part of a 26 foot wide lot that Henry Yerxa had purchased on November 1, 1879, from the National Bank of Commerce. He sold the eastern 25 feet in October of 1881 to Charles Hayden for 226 Commonwealth. All of the land was part of a parcel that National Bank of Commerce had acquired on May 18, 1876, from Nathan Matthews, which, in turn, was part of a larger tract originally purchased by Nathan Matthews on January 2, 1871, from David Sears, Jr., Frederick R. Sears, and Knyvet Sears.

Click here for an index to the deeds for 230 Commonwealth, and click here for further information about the land between the south side of Commonwealth and Alley 433, from Exeter to Fairfield.

On June 21, 1883, 230 Commonwealth was purchased from Charles Parker by Susan Esther (Piper) Taggard, the wife of retired bookseller Bartholomew W. Taggard. They previously had lived at 758 Tremont. They also maintained a home in Dublin, New Hampshire. 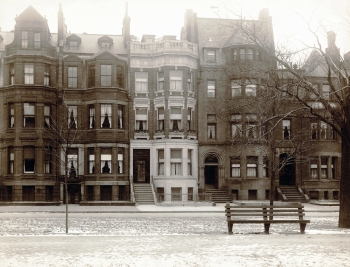 The Taggards’ children — Sarah Hollis Taggard and Henry Taggard — lived with them.

Sarah Taggard married in March in 1892 to George E. Durgin, a real estate dealer.  After their marriage, they moved to Malden.

Bartholomew Taggard died in August of 1897.

Susan Taggard continued to live at 230 Commonwealth with their son, Henry.

Henry Taggard married in October of 1897 to Mary Parker, who lived next door at 228 Commonwealth with her parents, Charles and Mary Jane (Schoff) Parker.  After their marriage, Henry and Mary Taggard lived at 1085 Boylston.  He became an investment banker with Lee, Higginson & Company.

By the 1897-1898 winter season, Susan Taggard had been joined at 230 Commonwealth by Miss Mary J. Patterson, a boarder.

By the 1902-1903 winter season, 230 Commonwealth was the home of Gino Lorenzo (Lopez) Perera and his wife, Caroline (Thacher) Perera.  They had married in May of 1901 after which they traveled abroad (their son, Guido Rinaldo Perera, was born in April of 1902 in Brussels).

Gino Perera was a classical mandolinist and later became a painter and sculptor; he served as president of the Boston Art Club.

During the 1905-1906 winter season, 230 Commonwealth was the home of iron and steel manufacturer Austin Augustus Wheelock and his wife, Fannie Smart (Coverly) Wheelock.  They also maintained a home in Waltham.  The Wheelocks had built 232 Commonwealth in 1881 and had lived there until about 1886.

On March 30, 1907, 230 Commonwealth was purchased from Susan Taggard by Cora (Crowninshield) Boyden, widow of Charles Boyden.  The transaction was reported by the Boston Globe on April 2, 1907.  It became the home of her son, Charles Boyden, Jr., a stockbroker, and his wife, Harriet (Ely) Boyden.  They previously had lived at 13 Gloucester.  Cora Boyden lived at 224 Commonwealth.

Cora Boyden died in June of 1919, and 230 Commonwealth was inherited by her son. He and his wife, continued to live there during the 1923-1924 winter season. They moved to 142 Marlborough for the next season, and then to an apartment in the Hotel Agassiz at 191 Commonwealth.

By the 1924-1925 winter season, 230 Commonwealth was the home of department store heir Harold Leufroi Chalifoux and his wife, Elizabeth Alice (Burrage) Chalifoux.  They had lived at 367 Beacon during the previous season.  They also maintained a home in Beverly.  The continued to live at 230 Commonwealth during the 1925-1926 season, but moved soon thereafter to 306 Marlborough.

On November 5, 1926, 230 Commonwealth was purchased from Charles Boyden by John Thomas Jefferson Clunie, a stockbroker. He and his wife, Suzette (Courtney) Clunie, made it their home. They previously had lived in an apartment at The Colonial at 382 Commonwealth. They also maintained a home in Beverly Farms.

The Clunies separated in December of 1932 and were divorced soon thereafter.  He moved to Beverly Farms and she moved to 43A Joy.

On December 23, 1932, the Massachusetts Hospital Life Insurance Company foreclosed on its mortgage to John Clunie and took possession of the property.

In 1933, 230 Commonwealth was the home of Henry Bryant Bigelow and his wife, Elizabeth Perkins (Shattuck) Bigelow.  Their usual residence was in Concord.  He was a professor of zoology at Harvard, where he also was curator of oceanography at the Museum of Comparative Zoology.  He was a founder of the Woods Hole Oceanographic Institution in 1930 and served as its first director.  By the 1933-1934 winter season, they had moved to 289 Marlborough.

By the 1934-1934 winter season, 230 Commonwealth was the home of real estate broker Lombard Williams and his wife, Ruth (Bradlee) Williams.  They previously had lived in Dedham.  They also maintained a summer home in Cohasset.  They continued to live at 230 Commonwealth until about 1939, when they moved back to Dedham.

On December 18, 1941, 230 Commonwealth was purchased from Massachusetts Hospital Life Insurance by Eva Helterline (Hilton) Allen, the wife of Ellwood B. Allen. They lived in Belmont.  Ellwood and Eva Allen were real estate developers and interior decorators.  In the late 1940s, they built a recording studio in the basement of their Belmont home and established the “Radax” record label, which featured local musicians.

In February of 1942, Eva Allen applied for (and subsequently received) permission to convert the property from a single-family dwelling into a lodging house.

They continued to operate the property as a licensed lodging house in the mid-1970s.  However, it appears that it had been converted into apartments much earlier.  The City Directories list multiple residents from 1953 (implying apartments), and actually list it as an apartment house with eleven units by the late 1950s.

In May of 1979, they filed for (and subsequently received) permission to convert the property from a lodging house into eleven apartments, which they noted was the existing condition.

On March 22, 1988, 230 Commonwealth Corporation filed a confirmatory Master Deed correcting the number of condominiums to eleven, reflecting the existing condition.

In December of 1996, the Building Department issued a violation notice citing the building for insufficient egress to the units.

On December 19, 1996, the Back Bay Realty Group LLC (Albert D. DiGregorio and Donna Hoban) purchased all eleven units of 230 Commonwealth from the Commonwealth 230 Limited Partnership. In January of 1997, it filed for (and subsequently received) permission to install an elevator and make other interior modifications, including combining several units and reducing the number from eleven to eight, “in order to correct egress violations.”

On August 15, 1997, the Back Bay Realty Group filed an amended Condominium Master Deed reducing the number of units from eleven to eight.