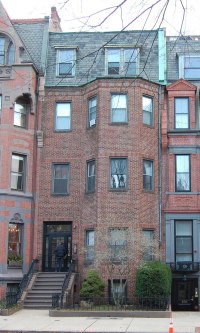 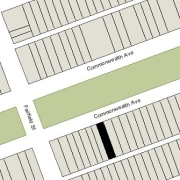 Charles Parker purchased the western 43 feet of land from building contractor George Wheatland, Jr., in two purchases, a 24 foot lot to the east on March 10, 1880, and a 19 foot lot to the west on April 16, 1880. In both cases, George Wheatland, Jr., had purchased the lots from the National Bank of Commerce of Boston on the same day he sold them to Charles Parker. On March 31, 1881, Charles Parker purchased a one foot wide strip of land to the east, abutting 226 Commonwealth, from grocer and tea dealer Henry Detrick Yerxa, part of a 26 foot wide lot that Henry Yerxa had purchased on November 1, 1879, from the National Bank of Commerce. He sold the eastern 25 feet in October of 1881 to Charles Hayden for 226 Commonwealth. All of the land was part of a parcel that National Bank of Commerce had acquired on May 18, 1876, from Nathan Matthews, which, in turn, was part of a larger tract originally purchased by Nathan Matthews on January 2, 1871, from David Sears, Jr., Frederick R. Sears, and Knyvet Sears.

Click here for an index to the deeds for 228 Commonwealth, and click here for further information about the land between the south side of Commonwealth and Alley 433, from Exeter to Fairfield. 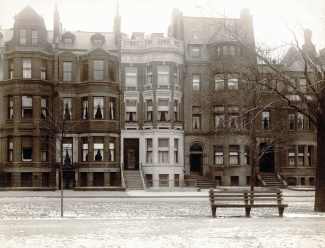 By the 1883-1884 winter season, Charles Parker and his wife, Mary Jane (Schoff) Parker, had made 228 Commonwealth their home. They previously had lived at 33 Worcester Square. They also owned a stable at 333 Newbury, which they had built in 1881-1882, and a home, Redgate, on Marblehead Neck, which they built in about 1886.

In November of 1885, their cook, whom they had discharged, was arrested for attempting to poison the entire family by mixing arsenic in the flour barrel.

Herman Parker, an architect and later a clothier in his father’s firm, married in April of 1891 to Lillian H. Percival.  After their marriage, they moved to Kilsyth Road.  Mary Parker married in October of 1897 to Henry Taggard, who lived next door at 230 Commonwealth with his mother, Susan Esther (Piper) Taggard, the widow of Bartholomew W. Taggard.  After their marriage, they moved to 1085 Boylston.

Mary Jane Parker died in April of 1899.  Charles Parker continued to live at 228 Commonwealth.  Their sons, Charles S. Parker, a sculptor and painter, and Ross Parker, who worked in his father’s clothing store, lived with him. 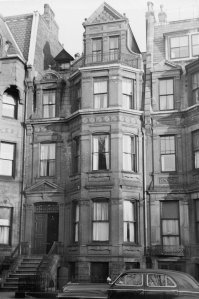 In October of 1900, Charles Parker married again, to his deceased wife’s sister, Morgiana H. Schoff.  They lived at 228 Commonwealth after their marriage; Charles S. and Ross Parker continued to live there with them.

Ross Parker married in April of 1910 to Ruth Eldridge Baker, and they moved to the Hotel Kempton at 237 Berkeley.

On September 5, 1917, 228 Commonwealth was purchased from Charles Parker’s widow and children by Payson Dana. He was an attorney and lived in Brookline.

On October 24, 1917, 228 Commonwealth was acquired from Payson Dana by real estate dealer James Mason Rothwell. The deed was not recorded until February 28, 1924, and Payson Dana remained the assessed owner through 1923. James Rothwell and his wife, Florence (Bunting) Rothwell, lived in Brookline. 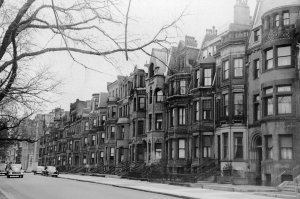 By the 1923-1924 winter season, 228 Commonwealth was the home of John L. Dion and his wife, Emma (Chevalier) Dion, who operated it as a lodging house. They previously had lived at 482 Beacon.

In April of 1929, the Building Department cited James Rothwell for failing to provide adequate egress. In May of 1929, he filed for (and subsequently received) permission to install a fire escape to meet the egress requirements.

Emma Dion died in 1932.  John Dion continued live and operate a lodging house at 228 Commonwealth until about 1938.

By 1939, 228 Commonwealth was the home of Mrs. Rosella May Little, the former wife of Albert McCredy (whose name she did not use), who operated it as a lodging house.  She previously had lived at 296 Newbury.

On February 17, 1943, the house was seriously damaged by fire, injuring Mrs. Little. The third and fourth floors were destroyed and the first and second floors were about 75 percent damaged. 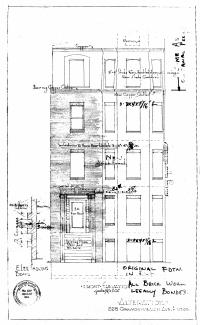 The property had remained vacant since the fire, and on October 17, 1945, it suffered a second fire.

In a December 5, 1945, letter to the City of Boston’s Legal Department, the Park Commission indicated that “James M. Rothwell was the former owner of the building and … the information I have received is that it was mortgaged at a very high figure.  The insurance was collected and turned over to the mortgagee.  I am informed that Mr. Rothwell has abandoned the property.”

On November 28, 1945, 228 Commonwealth was purchased from Esther Wasserman by Florence (Fink) Theran, the wife of attorney and real estate dealer Louis Theran.

In January of 1946, Louis Theran filed for (and subsequently received) permission to repair the fire damage and convert the property into ten apartments.  As part of the remodeling, designed by Saul Moffie, the top story was rebuilt, a new brick façade was added. and the entrance was “modernized.”  Plans for the remodeling — including floor plans and elevations — are included in the City of Boston Blueprints Collection in the Boston City Archives (reference BIN R-64).

On February 27, 1947, 228 Commonwealth was acquired from Theran Realty by Fred J. Walker, trustee of the Chaplin Realty Trust.

The property changed hands and on March 2, 1959, was acquired by Jack Eadie Molesworth. He was a philatelic dealer specializing in Confederate stamps. He lived in an apartment at 166 Beacon. In August of 1959, he married Phyllis Carpinteri. After their marriage, they lived at 166 Beacon until about 1964, when they moved to 88 Beacon. A leader of the ultra-conservative Young Americans for Freedom and a Republican State Committee member, he was an unsuccessful candidate for Congress in 1964. 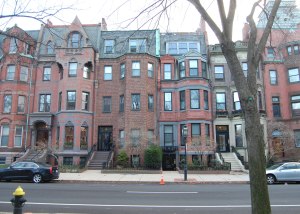