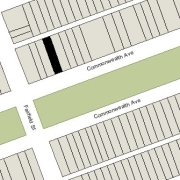 As originally built, 231 Commonwealth and 233 Commonwealth were of similar design, both with four stories and a basement, with brownstone façades at the basement and first story levels and red brick above. In 1937, 233 Commonwealth was remodeled to create s fifth story and replace the red brick façade with yellow brick.

Click here for an index to the deeds for 231 Commonwealth, and click here for further information about the land between the north side of Commonwealth and Alley 426, from Exeter to Fairfield.

Jacob Rogers was the Boston agent of the banking firm of J. S. Morgan & Co. of London, owned by Junius S. Morgan (the New York office of which was overseen by his son, J. Pierpont Morgan and later would become J. P. Morgan & Co.). In the 1870s, Jacob Rogers had been a resident partner in J. S. Morgan & Co. in London, and before that was a partner in Joseph B. Glover & Co., merchandise brokers in the East India trade.  Elizabeth Rogers was a founder and president of Brooke House, a model boarding house for working girls, at 79 Chandler Street.

Jacob Rogers died in January of 1900.

Elizabeth Rogers continued to live at 231 Commonwealth. From about 1901, she was joined there by her brother, Joseph Peabody.  A retired merchant and noted yachtsman, he was separated from his wife, Anna Perkins (Pingree) Peabody, who lived at 47 Commonwealth.  He continued to live with his sister until his death in April of 1905.

She continued to live at 231 Commonwealth and in Peabody until her death in November of 1921.

On February 28, 1922, the property was acquired from William Stober by Mary Lothrop (Webster) Butler, the wife of William Morgan Butler. They previously had lived at 486 Beacon. They also maintained a home in Edgartown on Martha’s Vineyard.

William Morgan Butler was a former lawyer and state legislator.  He had retired from legal practice in 1912 and became a cotton manufacturer.  In 1924, he served as Chairman of the Republican National Committee, and in November of that year, was appointed to the US Senate to fill the vacancy left by the death of Henry Cabot Lodge.  He lost his bid for election to the office in 1926, and lost a second attempt for election to the US Senate in 1930.

In September of 1924, Mary Butler acquired the house next door, at 233 Commonwealth, which they may have annexed for their use. She sold 233 Commonwealth in March of 1931.

On December 27, 1937, the Massachusetts Hospital Life Insurance Company foreclosed on its mortgage to William Stober, which had been assumed by Mary Butler, and took possession of 231 Commonwealth.

By 1938, 231 Commonwealth was the home and medical office of Dr. Eugene Todhunter Vincent, a physician and dentist. Living with him were his sister, Mrs. Eleanor Bertha (Vincent) Murray, the former wife of George Lawrence Murray, and their son, George Edwin Murray, a chemist. They all previously had lived 172 Commonwealth, where Dr Vincent also had maintained his office.

On February 26, 1938, 231 Commonwealth was purchased from the Massachusetts Hospital Life Insurance Company by George E. Murray, and on August 11, 1938, he transferred the property to Dorothy E. Chamberlain, a public school teacher in Durham, New Hampshire.

Eleanor Murray and George Murray continued to live at 231 Commonwealth with Dr. Vincent in 1940, but moved thereafter.

Eugene Vincent was estranged from his wife, Mabel Amanda (Short) Vincent, who lived in Cambridge, and when she died in July of 1941, he contested her will, which left most of her estate to the Church of the Nazarene, which had been founded by her father, Rev. John N. Short.

In 1942, Dr. Vincent married Dorothy Chamberlain. After their marriage, they made 231 Commonwealth their home. They continued to live (and he to maintain his office) there until about 1954.

On March 16, 1954, 231 Commonwealth was purchased from Dorothy (Chamberlain) Vincent by real estate dealers Stuart H. Hastings and Joseph A. Gautreau. In March of 1954, they applied for (and subsequently received) permission to convert the property from a single-family dwelling into twelve apartments.

On February 28, 1955, 231 Commonwealth was purchased from Stuart Hastings and Joseph Gautreau by the Neelon Management Company, Inc.

The property changed hands, and on January 3, 1963, was acquired by Pierre Louis de Bourgknecht.

On April 2, 1968, 231 Commonwealth was purchased from Pierre de Bourgknecht by Walter H. Fehrmann and his wife, Virginia (Riselli) Fehrmann. They lived in Belmont.

On September 14, 1995, they transferred the property to Virginia Fehrmann as trustee of the 231 Commonwealth Avenue Real Estate Trust.

231 Commonwealth remained an apartment house in 2016.