236 Marlborough was designed by architect Samuel D. Kelley and built in 1881 by building contractor Samuel Tarbell Ames. He is shown as the owner on the original building permit application, dated April 1, 1881.

Click here for an index to the deeds for 236 Marlborough, and click here for further information about the land between the south side of Marlborough and Alley 426, from Exeter to Fairfield.

236 Marlborough was one of nine contiguous houses (230-232-234-236-238-240-242-244-246 Marlborough) built in the same design and with similar architectural details, the only significant difference being the use of bows (rather than octagonal bays) at 244-246 Marlborough, the last two houses built. The original permit applications for all but 244 Marlborough are included in the Building Department’s files. Three of the applications – for 230, 232, and 246 Marlborough – indicate the architect as being Samuel D. Kelley. The other five applications do not indicate the name of the architect, but the houses are attributed to Samuel D. Kelley by Bainbridge Bunting’s Houses of Boston’s Back Bay, which, given the close similarity in design, appears to be correct.

The land for all nine houses was sold by the Commonwealth of Massachusetts through privately-negotiated agreements (rather than at public auctions) in November of 1879 and in early1880. Based on subsequent deeds and permits, it appears likely that the contracts for the four lots at 230-236 Marlborough, entered into on November 3, 1879, and for the four lots at 238-244 Marlborough, entered into on November 5, 1880, were with the Whitwells. The 25.3 foot lot at 246 Marlborough was composed of a 24.3 foot lot purchased from the Commonwealth on February 16, 1880, by George E. Niles, who sold it to Samuel H. Whitwell on March 23, 1883, and a one foot lot to the west that Samuel H. Whitwell purchased from the Commonwealth on January 15, 1884. The Whitwells probably retained Samuel D. Kelley to prepare a common design for the houses and retained Samuel T. Ames to oversee their construction, transferring to him their right to purchase the lots at 232-234-236 Marlborough as compensation. He then acted as the builder for those three lots and oversaw the construction of the other six. Alternatively, Samuel Ames may have held the original contracts for the three lots and used the same plans prepared by Samuel D. Kelley for his three houses.

In most cases, when the houses were nearing completion, they were sold to individual buyers who purchased the land directly from the Commonwealth and paid the Whitwells or Samuel T. Ames for the cost of the dwelling house. Frederick Whitwell kept 230 Marlborough, the first house built, as his home.  Samuel H. Whitwell kept 244-246 Marlborough, buying the land and then reselling the land and houses to individual buyers.

By the 1881-1882 winter season, 236 Marlborough was the home of Francis Augustus Osborn and his wife, Emily (Bouvé) Osborn. Emily Osborn purchased the land from the Commonwealth on November 3, 1881. They previously had lived at 54 Pinckney. They also maintained a home in Hingham.

Francis Osborn had served in the Civil War, rising to the rank of brevet Brigadier General of Volunteers.  He was a banker, serving as treasurer of the Corbin Banking Company until 1883, when he organized and became president of the Eastern Banking Company.

The Osborns continued to live at 236 Marlborough during the 1898-1899 winter season, after which they made their home in Hingham.

On March 31, 1900, 236 Marlborough was purchased from Emily Osborn by Clémence (Eustis) Jeffries, the wife of real estate broker William Augustus Jeffries. They previously had lived at 126 Beacon with his mother, Anna Lloyd (Greene) Jeffries, the widow of John Jeffries, Jr.  They also maintained a home, Cedar Cliffs, in Swampscott.

During the 1904-1905 and 1905-1906 winter seasons, the Jeffrieses were joined by Clémence Jeffries’s niece, Helen Bruce Cleveland, the daughter of Ralph Dwinel Cleveland and Aurora (Eustis) Cleveland. By 1910, she was living in Newton with her parents (in 1919, she traveled to Sibera with the American Red Cross, where she met Clement James Smith, also with the Red Cross; they married and subsequently lived in Shanghai and then the San Francisco Bay Area, where he was an insurance executive).

The Jeffrieses continued to live at 236 Marlborough during the 1923-1924 winter season.  For the next few years, they lived elsewhere, first at the Hotel Ludlow (southwest corner of Clarendon and St. James) and then in an apartment at 199 Marlborough.

During the 1924-1925 winter season, 236 Marlborough was the home of Robert Hallowell Gardiner, Jr., and his wife, Elizabeth (Denny) Gardiner. They previously had lived in Needham.  He was a lawyer.  In 1928, he organized the Fiduciary Trust Company and served as its president until his death in September of 1944.  By the 1925-1926 season, they had moved to Jamaica Plain.

By the 1925-1926 winter season, 236 Marlborough was the home of Ellen Louisa (Frost) Meacham, the widow of architect George Frederick Meacham.  Living with Mrs. Meacham were Willard Gilman Brackett, a retired shoe manufacturer, and his wife, Fanny Elizabeth (Breck) Brackett. They had lived at 4 Gloucester during the previous season.

Willard Brackett died in February of 1927.  Ellen Meacham and Fanny Brackett continued to live at 236 Marlborough during the 1929-1930 winter season.  They had moved by the 1930-1931 season and Ellen Meacham was living at the Hotel Vendome.  She died in January of 1931.

During the 1930-1931 winter season, William and Clémence Jeffries were living at 236 Marlborough once again.  Soon thereafter, they made Swampscott their primary residence.

On March 12, 1936, 236 Marlborough was acquired from Clémence Jeffries by Henry Giwirtz, and on March 23, 1936, it was acquired from him by David Stulin, trustee of the Marlborough Realty Trust, a real estate investment trust formed by David Stulin, Hyman Sirota, and George Bernard Rittenberg. David Stulin was a carpenter; he and his wife, Ann (Rosen) Stulin, lived in Dorchester. Hyman Sirota (Chaim Sirotkin) also was a carpenter; he and his wife, Rebecca (Rivka) (Epstein) Sirota, lived in Mattapan. George Rittenberg was a lawyer; he was unmarried and lived in Roxbury with his mother, Lena (Solomon) Rittenberg, the widow of Joseph Rittenberg.

Upon acquiring 236 Marlborough, the Marlborough Realty Trust applied for (and subsequently received) permission to convert the property from a single-family dwelling into five apartments.

David Stulin died in July of 1946, and on February 28, 1948, the Marlborough Realty Trust transferred 236 Marlborough to Ann Stulin as administratrix of David Stulin’s estate.

On November 2, 1948, 236 Marlborough was acquired from Ann Stulin by Clark Goodman, a nuclear physicist, and his wife, Mary Ellen (Hohiesel/Hoheisel) Goodman, an anthropologist. They lived in one of the apartments. They previously lived in Cambridge.

They continued live at 236 Marlborough until about 1951, when they moved to 421 Marlborough.

On December 28, 1951, 236 Marlborough was purchased from the Goodmans by Roy Charles Semple, an interior decorator, and his wife, Kathryn Van R. (Wilder) Semple. They previously had lived at 253 Newbury.

Roy Semple died in February of 1971. On June 28, 1971, Kathryn Semple transferred the property to herself and Jerald J. Bodner.

On July 11, 1974, 236 Marlborough was purchased from Kathryn Semple and Jerald Bodner by Betty Bishop and Rosalie M. Buck.

On September 3, 1974, they converted the property into five condominium units, the 236 Marlborough Street Condominium. 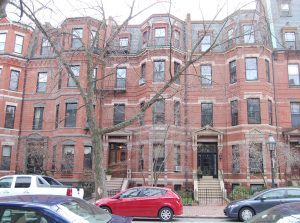